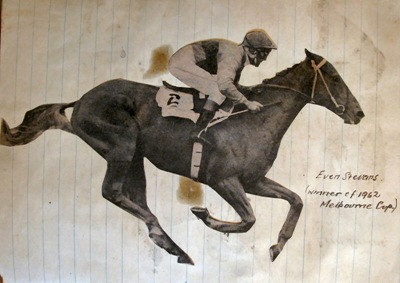 A page from my old scrapbook – Even Stevens

Well, some people may not think it is all that sacred, but the Group Three Bletchingly Stakes, that was run at Caulfield today, marks the beginning of the Spring racing season for me . Last year it was won by my old favourite Shoot Out. Unfortunately he will not be part of the carnival this year as he has been suffering from lower back problems and will be spelled until next autumn to enable him to recover.

This year’s version was won by Peter Moody trained mare Midsummer Music, who fought out the finish with fellow mare Rue Maple.

And it was good to see Altius, the little half brother of Elvstroem and Haradasun, start his season off with an impressive win in the first at Rosehill today.

August 1st is the official birthday of southern hemisphere race horses , and also marks the beginning of the season.

Black Caviar – we won’t see her race again until later in the season, but will certainly look forward to it. Unfortunately the anticipated clash with Singapore sprinting star Rocket Man in the Patinack Farm Classic will not eventuate. Also her closest rival in Australia Hay List will not race this spring, due to a pernicious leg infection that was ongoing for several months. Last news was that he was recovering – let’s sincerely hope so.

Sepoy – the star two year old of the autumn season, winner of the Blue Diamond/ Golden Slipper double, is apparently due to begin his three year old campaign shortly in Melbourne. His only defeat came at the hooves of Smart Missile, who will also be resuming shortly, after missing the Golden Slipper due to an injury.

Shamrocker and Scarlett Lady – dominant staying fillies of the Sydney autumn and Queensland winter season , are expected to be in there with a chance come Caulfield Cup time. It’s about time a mare won one or both of the big staying races; it’s now six years since Makybe Diva won her third Melbourne Cup.

Lights of Heaven – another of Peter Moody’s star performers and a staying mare at that. Very much looking forward to her return.

Actually WA has a classy sprinter called Barakey his trainer declares as being better than Hay List. Whether we’ll see him on the east coast is a matter of conjecture.

I’m sure I’ve missed some up and comers and no doubt there will be more to emerge this spring, but I’m also keen for the return of More Joyous, Maluckday, Enjin Number 9 and Love Conquers All.

Anyway the build up begins, and my interest is reignited. Not that it really ever goes away as I always check the racing news daily. 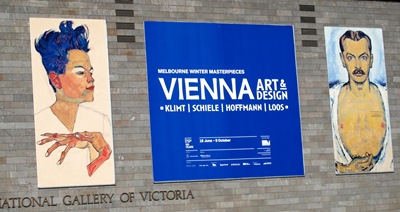 Yesterday B and I ventured forth to visit the National Gallery of Victoria Winter Masterpiece Exhibition, which this year features the art and design of Vienna from the late 19th Century to the early 20th Century, with such artists & designers as Gustav Klimt, Egon Schiele, Josef Hoffmann, Otto Wagner and Koloman Moser being among the major exhibits.

Although I have loved Klimt’s art since the early 1970s when I first became aware of it, I admit to being somewhat ignorant of the period in which he worked. This is despite the fact that I possess in my personal library a book called The Sacred Spring – The Arts in Vienna 1898 - 1918 which perfectly covers the period and art of the exhibition today.  I’ve looked at the pictures of course, but not read the commentary. 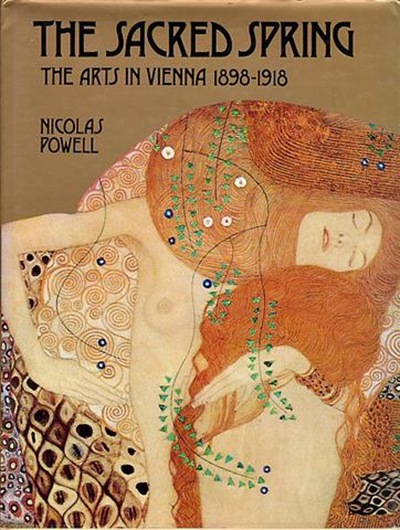 Anyway, today my ignorance was addressed and I emerged from the exhibition immensely impressed with the stylishness of the period and with a sounder knowledge of how it all came to be.

There were quite a few paintings by Klimt – both portraits and landscapes and also a replica of his Beethoven Frieze painting, a feature of the Secession Hall in Vienna. It was thrilling to see his pictures in person, like this portrait of his long time companion and muse Emilie Flöge. 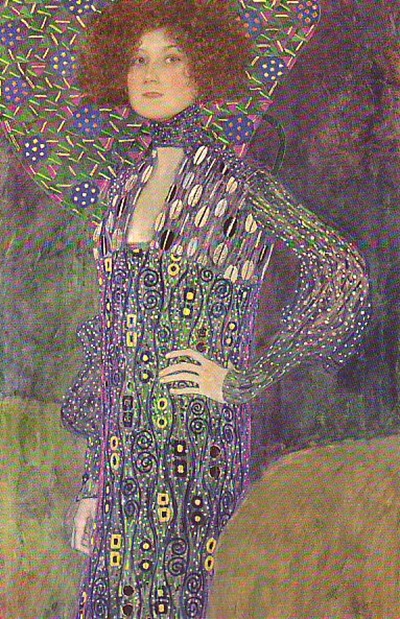 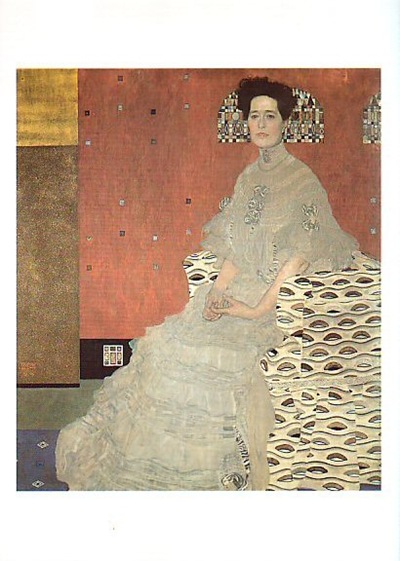 Egon Schiele’s paintings were also featured. I love this self portrait of his young self – he looks very cool and quirky. 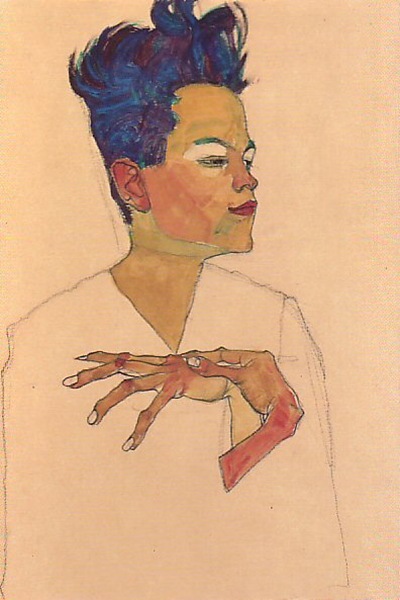 and this portrait of a boy dressed in Japanese costume. (Schiele, like many other artists in the period was heavily influenced by Japanese art) 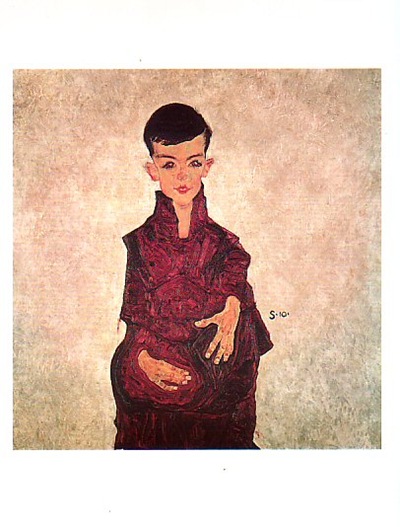 As well as paintings, the exhibition covered architecture, furniture, and design. This was where the exhibition really shone. The items on display were exquisite examples of the period – surprisingly modern- and rivalled the Art Deco exhibition of a couple of years ago.

For instance, this wonderful reproduction of the Die Zeit facade designed by Otto Wagner.  The picture below does not do it justice. It is a marvel of metal (aluminium) and glass. 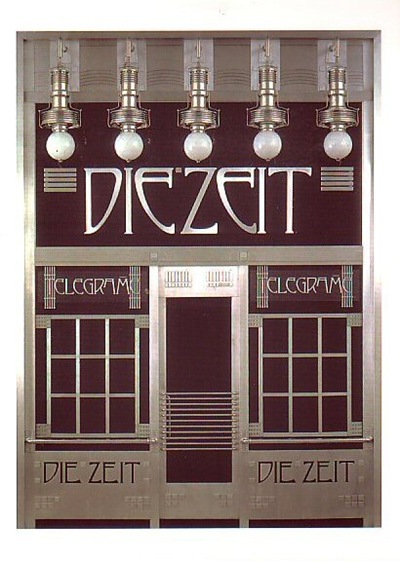 There was a video of the interior of the building – it was beautifully light and kind of retro space age . Below are a  few of the furnishings, also designed by Wagner. I really dug the warm air diffuser. 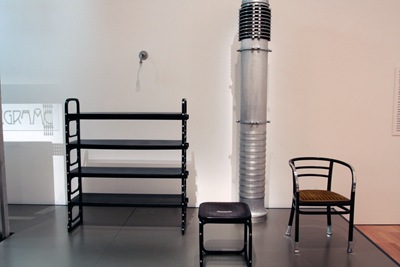 The surprise discovery of exhibition for me was the design work of Koloman Moser. Multi skilled, he designed furniture, tableware, jewellery, posters and textiles and also was a painter – his self portrait is below. 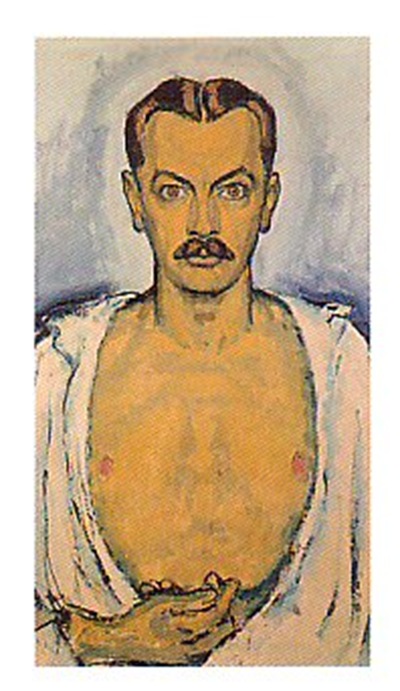 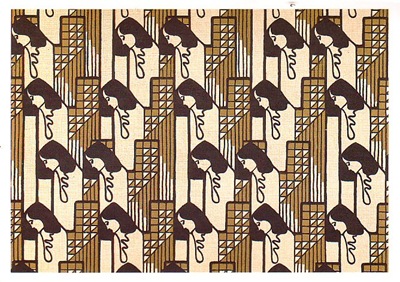 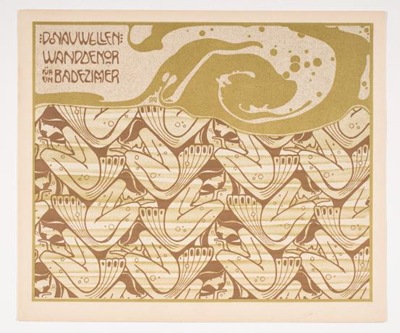 Poster for 13th Secession by Moser

Also impressive was the design of Josef Hoffmann, who like Moser and Wagner was multi skilled in a number of disciplines. He and Moser founded the Wiener Werkstätte, which brought together architects, artists and designers whose first commitment was to design art which would be accessible to everyone.

Below are two of Josef Hoffman’s tableware items – a mustard pot and a set of cutlery.

A great many of the artists and designers on display were members of the Vienna Secession which was formed in 1897, and represented a break away group of artists, seceding from the conservative Vienna Kunstlerhaus.  The Secession group held many exhibitions in their own building constructed by Joseph Maria Olbrich.

The exhibition displayed quite a few of the posters advertising the exhibitions. The one below was one of my favourites, though all of them were stunning, design wise. 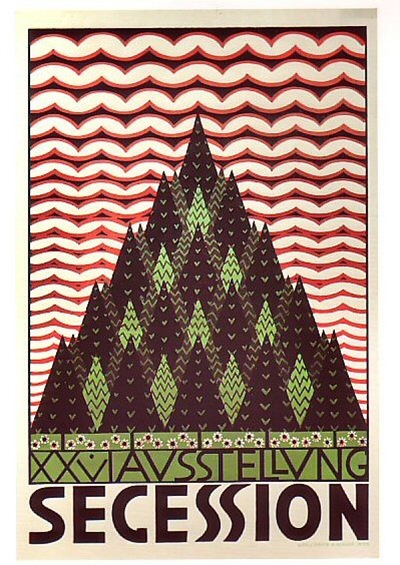 Needless to say we emerged from the exhibition, after wandering through it for two hours, our minds blown by what we had seen.  It was a fabulous and eye opening show of extraordinary brilliance.

The pictures above are mostly scans of postcards I purchased, as is my habit, at the Gallery shop, or from the program.

Next week I’m going to the Tutankhamen exhibition at Melbourne Museum.

The Ukeladies – Sunny Music for a Winter’s Day

Now you don’t often , if ever, hear calypso music these days, but today at Basement Discs, The Ukeladies played an enchanting set, redolent of sun, sand and tropical island paradises.  Yes, they’ve rediscovered Harry Belafonte and even performed his songs Island In The Sun and Angelina.

I was amazed I still remembered this music as in my childhood in the 1950s - no doubt like others of my generation -  we had a Harry Belafonte record which we loved, especially The Banana Boat Song – so good to sing along to.

To get back to The Ukeladies, they originated as an harmony, ukulele duo composed of childhood friends, Amanda Roff and Maylise Dent (pictured above). They describe their music as retro-future, faux Hawaiian and  demonstrated mastery over the the genre, with delicious harmonies, accompanying themselves on ukulele. They certainly looked the part, wearing  glamorous dresses, draped in leis with orchids in their hair.

They were accompanied today by several members of their expanded band, with Dan Luscombe on guitar, Phil Kakulas on bass, some other guy on a weird stringed instrument, and Manas Pandey, the possessor of wonderfully warm baritone voice on solo and harmony vocals.

It was an excellent, bright interlude in a dreary, cold winter’s day in Melbourne.

They will be performing a show at the Toff in Town on Sunday night, with a full orchestra and hula girls.

Actually Melbourne has been experiencing a fairly mild winter, after a cold snap in May boded ill for the season. In June the weather improved and we’ve had fine sunny weather, many days reaching 17° Celsius, probably an acceptable summer temperature somewhere in the world.

The plants are confused…

My impression was that hibiscus is a tropical plant, but the hibiscus in the front garden is blithely flowering as if it was already spring. It was only planted in spring last year as a mere twig, now it’s several feet high. 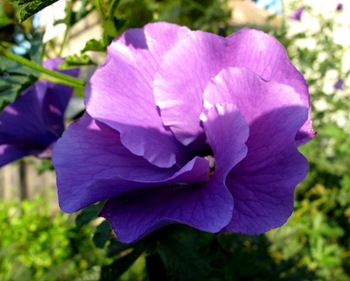 Also in flower in the front garden – who said it was winter – are lavender, rosemary and the hebe shrub. 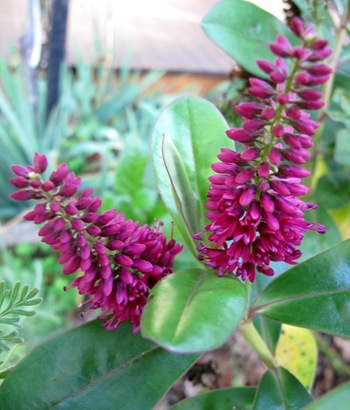 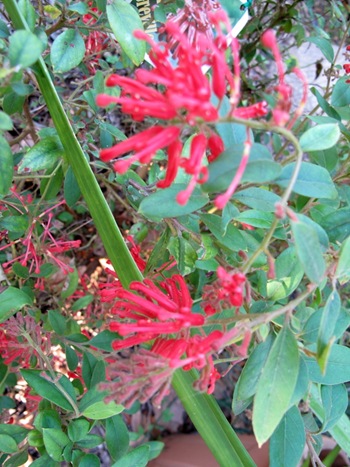 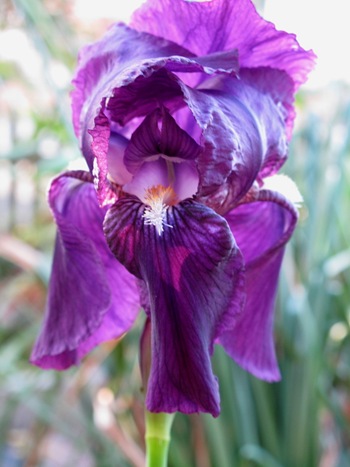 More typical of winter however, are violets who appreciate the cold and are flowering in abundance. When we first moved to this house in 1986, the only violets were the white variety, but I planted a purple one which has taken over. I picked a bunch of them this afternoon and took a photo. 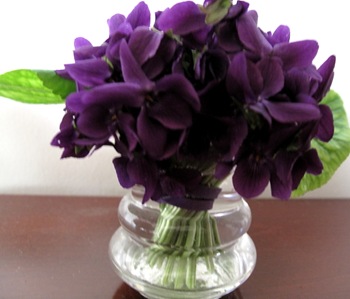 To save us from complacency, the weather has taken a nasty turn this week with chilly 12°C days predicted for the next few days accompanied by wild winds.

No I’m not referring to famous architectural landmark in Sydney, but to the rare milk white race mare who shares its name. 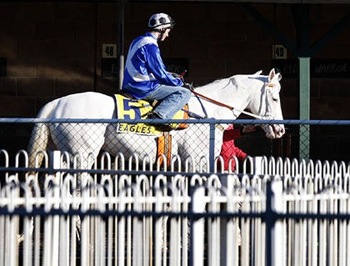 The Opera House – photo from SMH by Darren Pateman

Yesterday in the NSW country town Wyong, The Opera House finally won a race. It was over 2100 metre and she scored by a comfortable two lengths. I have written about her previously, back in December 2009, when she had her first start in Newcastle. On that occasion she ran fifth.

As I have her in my black book on Racing & Sports, I have been alerted to her runs, and from nine starts she has placed five times, and now won once. She recently raced over 2100 metres at Gosford and came third on that occasion, but it is obvious that like a true Zabeel  she appreciates the extra distance.

She is yet to run on a city track, and it will be interesting to see if and when she does, how competitive she will be.

Her breeding is excellent, being a three quarter sister to the great Might & Power, but she is unlikely to attain anywhere near his achievements, which included the Melbourne Cup, the Caulfield Cup and the Cox Plate. I was at Moonee Valley when he won the Cox Plate in 1998 and still remember the occasion vividly.

On the subject of stars of the turf, So You Think will be racing in the UK  on Saturday (early Sunday morning here) in the Group One Sandown Coral Eclipse Stakes where he will be out to redeem his shock loss in the Prince of Wales Stakes at Ascot a fortnight ago.  He was only beaten by a short margin, when Rewilding pipped him at the post when flogged by Frankie Dettori to the line. Aiden O’Brien’s pacemaker tactics came undone when the pacemaker missed the start, and in making up ground bumped So You Think in passing, causing SYT to over race and go for the line too early.  A messy race.

Anyway, despite the opposition being a cut above the norm tomorrow – with top UK racehorses Workforce and Snow Fairy being part of the small field -  we in Australia will be cheering on our champ.

Update: Sunday, 3rd July
So You Think was the victor in the Eclipse Stakes beating Workforce by what looked to be a length,  after giving him a two length lead. At one stage it looked as if Workforce would win, as So You Think, blocked for a run on the inside, seemed to become unbalanced, but he recovered and stormed down the outside with his characteristic devastating sprint to pass his rival and win.