Update on the state of Cat Politics

It is now four months since Timmy joined the household and the cat political situation is in a delicate state of détente, where the cats have gotten used to each other but maintain a cautious distance through mutual agreement. Timmy and Lizzie have sorted their differences and mostly ignore each other, even if they are sitting side by side waiting to be fed. Willy is the wild card in that he spends so much time out and about on his own cat business, that Timmy, when he sees him, acts as if Willy is a stranger and stalks him, whether out of menace or curiosity it is hard to fathom. Willy has taken to spraying everywhere inside and out. I suppose it is gratifying to see that he regards the house as his territory, but a nuisance as well. We’re always running round with a sponge, expunging his marks. Timmy, elderly cat though he is, has taken to slaughtering the local wildlife – ring tailed possums predominantly. He has previous form killing possums, so we naturally assume he is the murderer. We haven’t seen a rat or mouse dead or alive for months. Either Timmy’s presence has cramped the hunting abilities of the other cats or there aren’t any rodents around to be caught.

The next cat, I swear, will be called by a name that does not have the “I” vowel. I suppose one name fits all, where the cats are concerned. Whenever you call Willy, Lizzie or Timmy you are likely to get a different cat to the one being summoned. They look puzzled when you don’t react to their presence and can’t understand why you are still calling them when they are right there in front of you. An indignant meow is the usual reaction. So, the next cat gets called Boris, Morris, Amanda, Lulu, and Lola - whatever. Of course no matter what the name, it will, in the course of time, get reduced to a diminutive with a “Y” on the end.

We will be away at my brother’s place down the coast for Christmas Day and will be spending the night there. The cats will be left in charge of the house. It will the first time we have been away for more than a few hours, since Timmy came to stay, but I’m sure we will return to a peaceful household with no blood on carpet as we’re very confident that the détente will prevent all out mayhem.
Posted by Anne S at 3:53 pm 2 comments:

That pretty well sums up my attitude to the impending festive season. I am feeling less than full of Christmas cheer, I must admit for reasons that are beyond me at the moment. Partied out perhaps, shrinking from being sociable, bored with whole thing.

Still, soldier on I must and there is the bright prospect of a break from work for a week, where I plan to lounge around and read and play computer games.

Last Sunday I went to the Nu Country Christmas party as a matter of duty towards the Nu Country organisation. I maintain a website for them and I was there to take photos for the website. There were about six country music acts scheduled and I managed to stay for four of them. 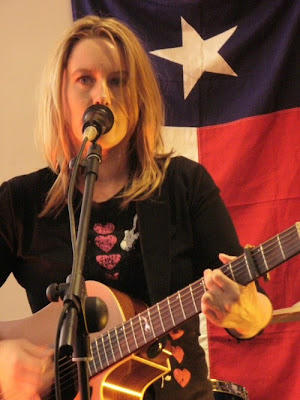 First up was young country girl Susan Lily who hails from the south western New South Wales town of Hay. She is an up and coming singer songwriter - yes, another one – who gave us a taste of her wares on Sunday. Susan’s set was entertaining enough and her songs were good as was her voice which had a country twang, though somehow lacked expression. 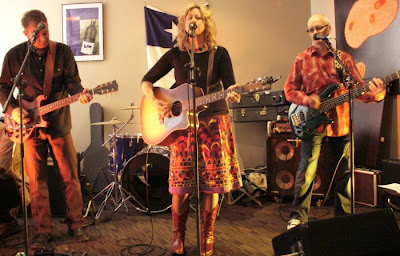 Suzie Dickinson and her band were next and her act was the highlight of the afternoon. She is more alt country than country if you know what I mean. It was more rootsy and rocky than country and more to my taste musically. Suzie has been around the scene for ages and is a very experienced performer. I enjoyed her set immensely. 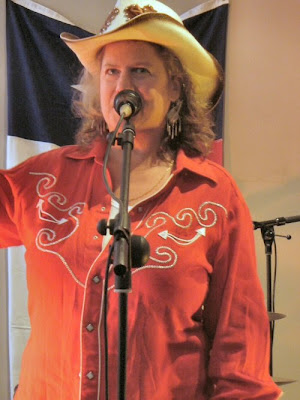 The next act, by Leslie Avril, was a sizzler. Leslie has made a name for herself as a honky tonking raunchy singer and entertainer. Her songs and act were sensational and risqué. She puts on a high energy show that is crowd pleasing, especially if the audience is country music orientated. I found her set enjoyable, though I’m not all that keen on the type of music she specialises in. 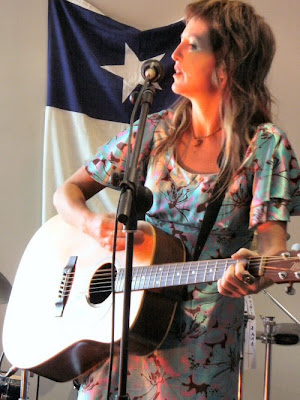 Former Toe Sucking Cowgirls member, Tracey Bunn was the last act I witnessed. Tracey comes from Darwin in the Northern Territory and is described on her my space page as having “a voice like an angel and a mouth like a sailor”. She gives the impression, as does the other member of the toe sucking cowgirls' duo, of being a hard drinking, loose living country girl. Her own music, however, is introspective and locally flavoured. She was accompanied by an ace guitarist also from the Territory.

By the time Tracey’s set ended we had been at the party for about four hours so called it quits and went home.

These Nu Country parties occur once a year and are well organised and offer a range of music across the country genre. It’s a pity they don’t get much of a turn out for these parties as the whole show was free and the entertainment, if you like that sort of music, is of a high quality.

The website is very successful and is stuffed with information, mostly written by David Dawson, head honcho of the organisation. He’s a music journalist by profession, so it’s second nature to him to run off a feature story or review. I occasionally contribute a concert review, but no-one else contributes anything to the site, though volunteer video camera operators and editors create the TV show which is shown on a community channel once a week during a biannual season.

In other music news, Patty Griffin is returning to Australia in March for the Easter music festivals which proliferate at that time of year. Music lovers are spoiled for choice during this period. Patty will be performing at the Palais Theatre on 28 March 2008. I’ve got good tickets and am looking forward to seeing her again, especially as she will be bringing her band this time.
Posted by Anne S at 3:38 pm No comments:

I haven’t written much about books of late, mostly due to reading the long and involved House of Niccolo saga by Dorothy Dunnett. I’m on the last book “Gemini” at the moment and it has been so pleasurable reading the eight books, I will be sorry to finish.

Dunnett’s books are monsters in size and weight, so during the daily commute I have been taking lighter books in my bag for the journey. The first was Michael Swanwick’s “The Iron Dragon’s Daughter” – a book I had been considering reading for years and finally purchased on a discount voucher from Borders. It’s now one of the Fantasy Masterworks Series published by Gollancz. The other is “Trixie” by Wallace Graves, a book discovered unread on my bookshelf, an old Penguin paperback.

I realised the other day that the heroines of both "The Iron Dragon’s Daughter" and "Trixie" are pretty similar in many ways. The stories differ of course, one is set in a fantasy world and the other is set in Los Angeles in the 1960s. 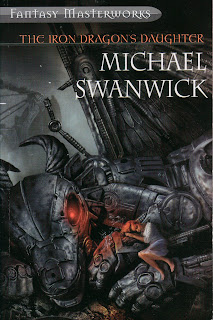 The “Iron Dragon’s Daughter” is the tale of human changeling Jane trapped in Fairyland and how she seeks to free herself from its thrall. The Faery of this novel is like no other. It is not cute or Tolkienesque, but steam punk, nasty and a satirical mirror of the real world. Jane is a spunky heroine. At the opening of the novel Jane is enslaved in an iron dragon manufacturing plant, working in Dickensian conditions as a factory hand along with children of other species. She comes across a grimoire and realises that she has the power to use it. Something else knows this, a disabled Iron Dragon who plots revenge on the world. He courts Jane’s attention and manipulates events to the extent that Jane is forced to flee. To do this she steals the dragon and they fly beyond the factory into the larger world outside, whereupon the Jane and the dragon part ways.

Jane realises her lack of knowledge limits her ability to truly escape from this faery world so she sets herself to get an education, concentrating on alchemy.

The novel follows Jane’s acquisition of knowledge and her adventures in the academy until she eventually reunites with the dragon who is still using her for his own purposes which have become Jane’s own.

It is an unusual novel and a very originally envisaged fantasy world. 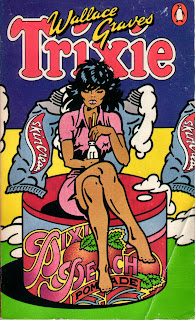 The Wallace Graves book is also an odd novel and Trixie the heroine is unusual in many ways.

She is a near white illiterate orphan who has been lured onto campus with promises of a college education by two unscrupulous professors, one who uses her for sex and her knowledge of popular music and the other as the subject in a McLuhan-style pre-literacy study.

Trixie however is smarter than they think.

The novel is written in the style of a diary recorded by the sassy Trixie. The first entry covers the assassination of John F Kennedy and introduces the reader to Trixie in her words:

"This is the wurst awful that happen.
Somebody kill him. The president of the U.S. of A. is ded!"

Trixie’s prose, in a kind of illiterate dialect at first, improves as her education progresses. Her diary documents the major events of the time she lives in – the race riots, the black power movement and the struggle for integration by the blacks of America – as well as telling her own story with disarming frankness.

Living at the College campus Trixie is a changeling in a new world, like Jane. Trixie struggles to free herself from her past and escape into a brighter future, through education, like Jane.

Trixie’s sixties world of sex and drugs and rock n roll is echoed in the similarly decadent fairyland of “The Iron Dragon’s Daughter”. It is these elements that made the connection in my mind between the two novels.

Though very different, both are interesting and unusual novels. I think it uncanny that after finishing the Swanwick novel, I picked out Trixie quite by chance and found how similar they were. 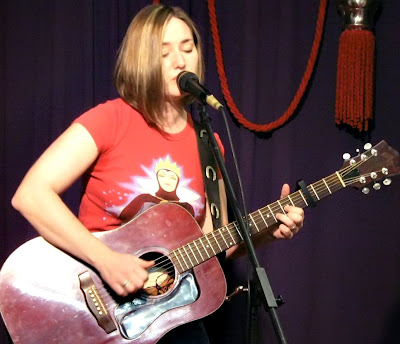 What a wonderful treat it was to see Canadian artist, Susie Ungerleider aka Oh Susanna, playing live today at Basement Discs!

I feel spoilt having experienced in such a short period of time, two exceptional singer songwriters.

Oh Susanna is up there with Patty Griffin in terms of having a great voice coupled with an enviable ability to write wonderful songs. She gave us a small taste of her talent today at lunchtime, where she sang eight songs from her latest CD.

Her voice is powerful, pitch perfect and has an attractive broken hearted break in it. I was very impressed with her performance and I am very tempted to go to her only Melbourne show next Tuesday at the Toff in Town a newish venue in the city.

She has just released a new CD “Short Stories” which has been highly praised by major music magazines like Uncut and Mojo. I agree with the critics – it is lovely.

I also like her taste in T shirts as above. Apparently this particular wicked queen shirt was a present from her husband last Christmas.

Her music is a mix of folk, country and blues, but is very individual all the same. I highly recommend checking her out if you love great singing voices and interesting song lyrics.