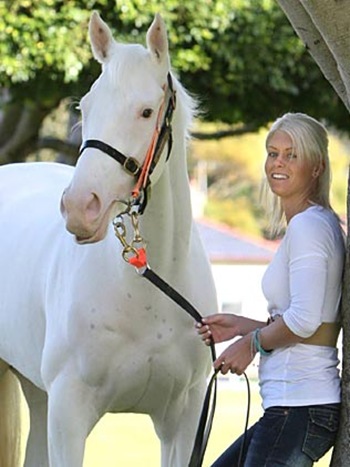 oh gosh.
and what a great name.

and strappers have to be tougher and rougher than that one looks.

wishing you Crippy Crimble cos it's that time of year.

Which name? The Opera House or The Handsome One - both pretty good actually.

I believe the girl in the picture is a jockey, Jodie someone.

And merry festive occasion to you as well.

Wishing you a super 2010 too in whatever you plan to accomplish.

I can remember exactly where I was when this awful decade came into being. Believe it or not, when I rang in the new year on January 1, 2000, I was not only stone-cold sober - I was at church! My then-girlfriend and I attended a special midnight mass at the local Catholic church to welcome in, not only a new decade, but a new century and a new millennium. I remember feeling filled with optimism. By entering this new era, I felt, we could wipe the slate clean. Maybe this would be a new age of peace, love, brother and sisterhood. EVERYBODY SING!

How utterly naive on my part, huh? By year's end, all of that hope was out the window and into the toilet. In December of 2000, an ideologically perverted Supreme Court would assist in a stolen election by stopping the vote count in the state of Florida, installing a corrupt little frat boy with the I.Q. of a half-eaten box of Milk Duds as president of the United States. It was all downhill from that moment on. From the birth of "Reality Television" to the worst attack on American soil since the Civil War, it was quite a strange ten years to say the least. Thankfully this awful decade is a mere three days away from being forever consigned to history's scrap heap. Hallelujah.