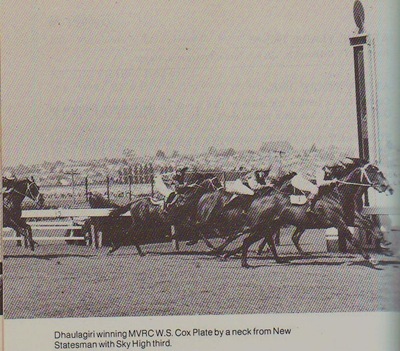 I have been remiss in posting of late, but the renovations, despite not actually living at the house, have distracted my routine. Being obliged to use my notebook computer for composing blog posts, I miss my super illuminated keyboard and feel uncomfortable with the cramped keyboard on this notebook.

Considering the photo above, you will have gathered that this post will be about racing and you’re not wrong. It will be anticipating the coming Spring racing season and reminiscing about Australian racing history.

The photo above is of Dhaulagiri, my favourite racehorse  of the early 1960s, which was when I first developed my interest in the sport. I scanned the photo from a book I recently purchased. It came to my attention on a racing forum and is called Major Australian Races and Racehorses 1960 - 1980 by Peter Pringle.  I found a copy going at a reasonable price on Ebay and promptly bought it. It is a handsome leather bound hard cover and filled with invaluable information on noted Australian racehorses from 1960 to 1980. It records all their races with such details as weight carried, winning margins and who ran what place. It also has black & white photos of each horse’s most prestigious win.

One of the abiding memories I have the early 1960s racing scene, when I was following the fortunes of  Dhaulagiri, was a series of consecutive races involving Dhaulagiri and two other great racehorses of the period, these being Tulloch and Lord, where they raced against each other in great three horse races.  I can’t remember whether there were other runners in the field - the book does not note field sizes - all I recall are these three.  In the image below I have highlighted the race details of the consecutive races that have stuck in my memory all these years and have been confirmed in this wonderful book. 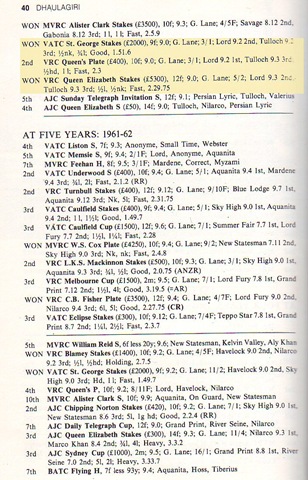 Dhaulagiri ran twice in the Cox Plate, losing to Tulloch by ½ length in  1960, but he won the 1961 Plate from New Statesman and Sky High who were both fine racehorses at the time. Sky High was the grandson of the famous racing mare Flight.

The racehorses of the past appear to be made of tougher stuff than today. Despite being stallions, many of them raced through from two years of age to six or seven years and the geldings often raced on until their ninth year.  They carried huge weights – up to 10 stone, which in metric terms is 63kg.

I lost interest in horseracing during the late 60s/ 70s, being too busy with University and the other obsessions of my youthful existence, but judging by the book Major Australian Races and Racehorses 1960 – 1980 I missed out on some classic runners like Kingston Town  for example.  I was delighted to come across familiar names in breeding circles, Denise’s Joy for one who is of course one of the famous matriarchs of Australian turf history, being the grand dam of Tuesday Joy and More Joyous.  Premier Group races are named after other notable runners in the 1960s/70s – Manikato, Storm Queen and Vain for instance.

My interest in horseracing revived in the 1980s and I’ve been following it ever since.

Which brings me to the impending Spring racing season…

The Group Three Bletchingly Stakes is the first group race of the spring season and is to be run this coming Saturday at Caulfield, though the actual spring season doesn’t officially start until after August 1st. This year’s version of the Bletchingly Stakes has attracted an interesting field that includes former Asian galloper Green Birdie and did include old favourite Heart of Dreams, but he has been scratched.  The early favourite is three year old Zamorar, but  Ready to Rip is worth consideration, having the Luke Nolen – Peter Moody factor in his favour.

I’m also interested to see how The Travelling Man fares in the Natalie Hunter Handicap a race over 1000 metres for two year olds.  He hasn’t raced since finishing 6th in the Blue Diamond. Having seen him in the flesh, I was impressed with his good looks so take an interest in his career.

The big guns have not been drawn as yet, but it won’t be long before the stars of autumn begin their spring campaigns.

My Horses to Watch for in the spring.

Black Caviar’s future is yet to be decided. Will she race on or head for the breeding barn?

Living with the Russian Princess 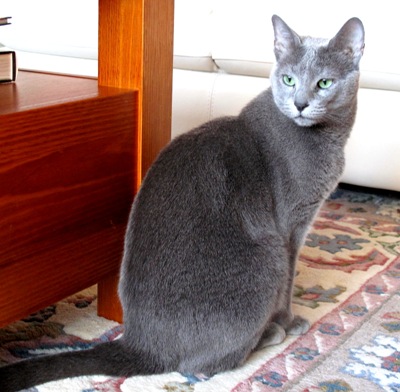 Since Tuesday I have been living two doors up from the Cat Politics domicile, cat & house sitting for B & B who have flown to France for a long holiday bicycling through the French countryside.

Pictured above is Talya the Russian Princess, who is a sweet cat of the Russian Blue breed. The breed is characterised by their wonderful silvery blue fur and quiet and gentle temperament.  This is quite a change from the rambunctious nature of my own cats, or surviving cat as in Willy, who has a powerful personality and demands attention in no uncertain terms.

It took a few days for Talya to get used to me, but now we’re good friends and she welcomes me with every sign of pleasure when I return from an outing. No doubt the hand that feeds has something to do with this, but she is no longer aloof and timid as she was at first.

So here I am in a comfortable warm house with a lovely undemanding cat for company. Peace and quiet rules as opposed to the racket of renovations. Apropos the renos, they appear to be progressing well and most of the previously floorless rooms have the flooring base laid, on which the boards will be placed.

I have my notebook computer, a selection of my favourite CDs and a bag of books. I selected the books on size mostly; monster tomes that will keep me in reading matter for a few months. I am currently rereading Kristin Lavransdatter by Sigrid Undset, a trilogy of historical novels set in 14th Century Norway. It has been many years since I read this book. According to a site I came upon on the internet a new translation is available. The version I am reading is a Picador published in 1977, so no doubt it is the maligned old translation.  Notwithstanding the translation’s shortcomings, it is still an engaging and absorbing read.