Spring is in the air despite the rotten weather 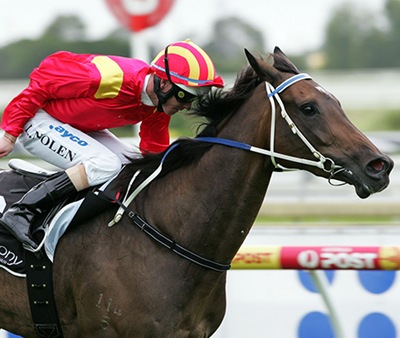 The spring racing season is gathering pace judging by the race card at Caulfield this coming Saturday, where three races have caught my attention; so much so I might venture out that way this weekend to take in the action.

But before considering the up and coming races, I feel I must comment on the tragic death of Typhoon Tracy earlier this week. She died, after delivering her first foal, from a suspected ruptured broad ligament. The foal, a colt by Street Cry, survived and is by all accounts doing well – there are some lovely photos of him on Peter Moody’s twitter - and he looks just like his mum. Tracy’s death is very sad news for those of us who followed her career until her retirement in 2011 after winning the Orr Stakes for a second time. She was one of my favourite racehorses at the time and she retired with six group one wins under her belt and as 2010 Horse of the Year.  I was looking forward to seeing her children race in the future, but now who knows if her foal, if he survives, will hit the racetrack. I like to think of her running around in horse heaven, part of a herd of class mares along with Sunline, Hot Danish and Pinker Pinker etc.

Other news of a disappointing kind, is that Atlantic Jewel will miss the spring season due to a tendon injury and Manawanui could well miss it as well, having performed under par during recent hit outs. And of course Black Caviar will not be seen this spring either, though there is a faint chance she will return in autumn next year if she is not retired.

So on to the racing card at Caulfield…

Races 3 and 4 are 1100 metre sprints for three year olds, the first being the Listed Vain Stakes for colts and geldings. The Travelling Man is one of the field of nine contestants. He ran third to Planet Voyage in his first run for the season, leading for most of the race to tire at the end. Planet Voyage is also running in the Vain Stakes and will most likely start favourite. Other chances are South Australian gelding Psychic Mick and Underestimation, who both have good form from autumn.

The Quezette Stakes is the fillies equivalent of the Vain Stakes and the exciting Samaready will be starting off her spring campaign in this.  She won the Blue Diamond Stakes then ran third in the Golden Slipper, before being spelled, so it will be interesting to see if she returns in winning form. Her main competition appears to come from Elite Elle, who is yet to be beaten after three starts, the last on heavy going and Ephemera, one of Peter Moody’s stable with Luke Nolen in the saddle.

The Group Two PB Lawrence Stakes (formerly the Liston Stakes)  is the feature race of the meeting, and has attracted a classy field of middle distance runners. Heart of Dreams is one, Rekindled Interest is another, as is last start winner Ready To Rip. But interest will be focussed on Western Australian, Luckygray, who has been going great guns on his home turf with 10 wins from 13 starts. Also of interest is Seville, an European import and Zamorar who has only been narrowly beaten in his last three starts though expectations in each case were high. I have never seen Heart of Dreams in the flesh, though I have been following him for years, so am looking forward to seeing him live and maybe getting a good photo.

There’s also a nice mare’s race – the Group Three Cockram Stakes - following the PB Lawrence Stakes with the likes of Yosei, Glows, Lucky Penny and Le Societe among the chances.

In Sydney, All Too Hard will be kicking off his spring campaign in the San Domenico Stakes, a Group Three race over 1100 metres for three year olds. He faces a small but select field of five other runners, which include Driefontein and Snitzerland who was a close second to Pierro in the Golden Slipper Stakes in the autumn.

The weather in Melbourne has been cold and wet in the main over the past week or so, so the Caulfield track will most likely be rated on the slow side, especially as tomorrow’s weather prediction is for more rain. However it is likely to clear on Saturday, so a pleasant day at the races is not without hope and the light should be good for photographs.