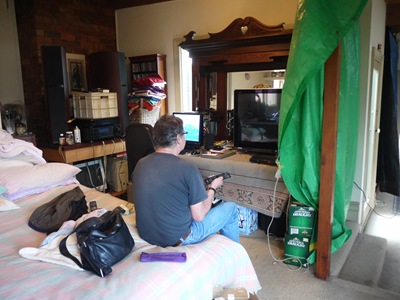 Pictured above is the remaining living area in the Cat Politics domicile, formerly the dining room. As you can see it has all the home comforts – TV, stereo, computer, bed and booze. All that’s missing is adequate heating, but we are a hardy lot and our habit during winter is to leave the doors open for airing anyway, and only turn the heating on at night. There is a small portable Rinnai gas heater we can use to take edge off in the evenings.

The renovations commenced on Monday morning and as I write, all the carpet has been removed from the front rooms, not to mention the floorboards, and the en suite bathroom is gutted. 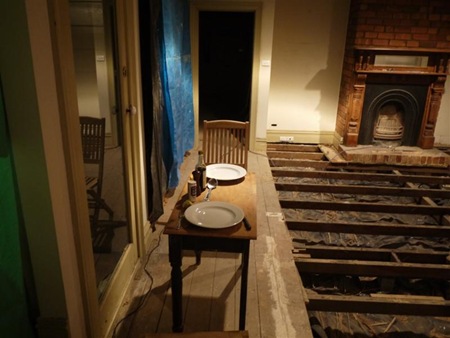 I’m staying here this week, then moving two doors up to mind the neighbour’s house and cat for five weeks next Tuesday.  So far B and I have not come to blows coping with the compressed household arrangements, but it does become a trifle irksome, if one party wants to watch TV or play CDs when the other seeks peace and quiet.

Surprisingly Willy, after making himself scarce for most of yesterday, has adapted to the disruption well and barely turned a hair at the racket created by the builders today.

Well may you ask what has happened to the furniture etc. that used to stand in the now denuded rooms.

B very cunningly managed to squeeze the bulk of it into the backyard studio with the other odd item or dozen being stored on the front verandah.

By now of course, I’ve totally forgotten where everything is, so if I suddenly think of something I really need, it’s tough luck. Fortunately I didn’t have to pack up my large bookcase; it’s intact covered with a tarp and still accessible. 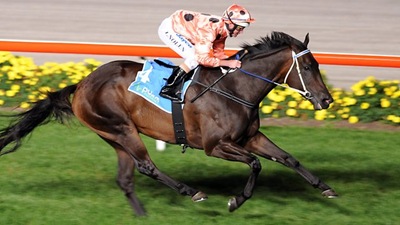 Despite being thoroughly distracted by the impending renovations on the home front, I have followed closely Black Caviar’s preparations for her shot at fame and glory in the Golden Jubilee Stakes at Royal Ascot tonight (12.45 am our time).

By all accounts she is fighting fit, and even though the track will most likely be on a softer side than she is used to, she should win; we in Australia fondly hope so.

I don’t think I’ll stay up and watch the race, or even go to the party being thrown by Racing Victoria tonight at Federation Square, much as I’d like to. But sense has overruled the adventurous side of my nature. It would be bloody cold standing outside at midnight in the city, and then there’s the problem of getting home…

Anyway, let’s hope our star racehorse shows the world her best shot with a glorious victory.

The last Group One for 2011/12 racing season was run this afternoon. I’m delighted that my fancied runner Pear Tart was successful.  The race was the Tatts Tiara for fillies and mares over 1400 metres and had a large field of 18 runners.  A pity I didn’t have any money on Pear Tart, as she paid handsome odds.  Skyerush ran second with Gai’s Choice filling third spot. The favourites were unplaced.

Thank goodness that Black Caviar won the Golden Jubilee Stakes, albeit by a whisker. Of course we would have liked her to win by many lengths as is her wont, but she did her best, notwithstanding the puzzling riding tactics of Luke Nolen. So it’s now 22 wins from as many starts.

There has been talk of retiring Black Caviar, but I truly hope she will continue to delight her adoring Aussie  fans for another season or two.

For some reason or other, I have felt disinclined to blog over the past week or so, but tonight finds me back in the mode.

On the home front, chaos reigns supreme, due to impending house renovations. We have to clear out all the front rooms and living area, in order to have new flooring and a new bathroom installed.

It’s probably fortunate that Lizzie will not have to put up with the disruption, but poor Willy is already disturbed by all the changes to his familiar environment.  It’s the depth of winter as well, so he is more inclined to huddle indoors than hang around outside when it’s cold.

I’ll have to move out during the renovation, fortunately only a few doors up. The neighbours who live there are going away for five weeks, and would normally leave their cat at a cattery. This time though I’ll be there keeping company with the sweet little Russian princess, Talia. I’ve always felt sorry for poor Talia as her owners seem to be away more often than they are at home, so she has spent most of her short life in catteries.

Along with coping with the trying domestic situation, I’ve been intermittently keeping tabs on the progress of the Tex Murphy Kickstarter, and am delighted to report that the funding goal of $450,000 has been met. Kickstarter really sucks you in, and you find yourself supporting any number of other projects at the same time. It’s all due to the astonishing community there – they all support each other’s projects in a give and take kind of way.

Also I’ve been following Black Caviar’s preparations for taking on the world at Ascot.  She travelled in state in a special compression bodysuit, and arrived in good order according to reports. Can hardly wait for the Diamond Jubilee Stakes on the 23 June at Ascot.

And today, I took time out to enjoy a sweet and gentle in store at Basement Discs this afternoon. 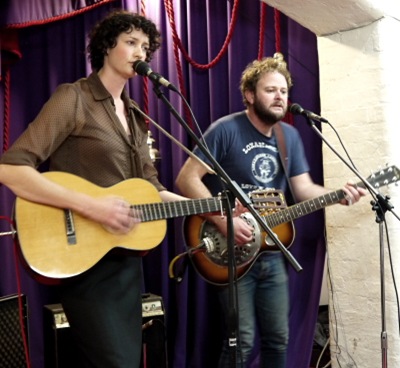 The artist was Alison Ferrier, another local singer songwriter. Her short set, promoting her debut solo album Sugar Baby, was a soothing interlude in my day, her music being romantic with an old time sensibility - pretty melodies set to waltz time. Lovely stuff.

You can check her out at the link above.