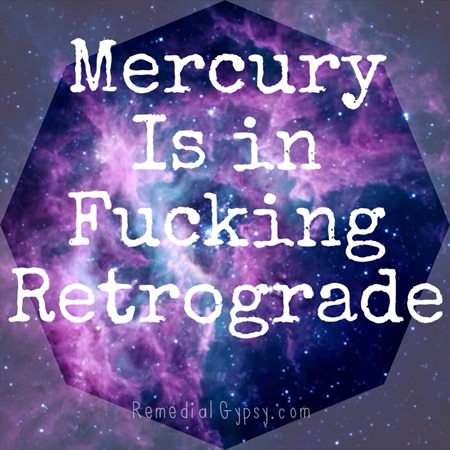 Is your phone on the blink?

Is your internet connection unreliable and slow, even if you’re not on the NBN?

At the Cat  Politics domicile our landline phone hasn’t worked for several days due to faulty wiring either on the property or outside in the street.  This in turn has affected our internet access, which goes off when the phone - which we can’t answer - rings.

Wouldn’t you know it - Mercury has been retrograde since 3 December and won’t be direct again until 23 December, just in time for Christmas.

As the phone connection is through my ISP we can’t just ring Telstra and complain, but need to have the internal wiring checked out by an electrician before contacting IINET.  An electrician is coming sometime next week, so hopefully the fault will be resolved soon.

This time last year we had a very sick cat, the still lamented Willy the Tonkinese, who died in the early hours of Boxing Day.

We’re not spared this year, with Talya having a problem with her gut,  though it is not life threatening. She appears quite healthy and has not lost her appetite.

For several months she has been shitting inappropriately on various rugs in the night or early morning, not all the time, but enough to cause concern.  Of course it could be an expression of displeasure at the relocation, but as the evacuation was diarrhoetic, with evidence of blood and mucous, we took her to the vet to have her checked out the other day.  We’d previously taken her to the Ivanhoe Vet, but weren’t that happy with the vet we saw, so took her to the East Ivanhoe Vet this time – an older guy who seemed to know his stuff.

He prescribed an antibiotic and advised us to not feed her for 24 hours, then feed her small amounts of food for several days. 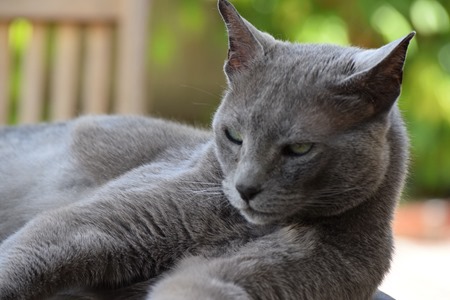 Talya lounging on the outdoor table

She was puzzled and stressed by the enforced fast the first night and took it apon herself to hunt her own dinner, catching a small rat, which was promptly stolen by Bingo who played it to death.  The next night she got another rat and probably ate it.

Anyway, the antibiotics appear to be working as she hasn’t shat inside since the visit to the second vet. She has always been an anxious cat, which in fact probably has affected her guts.

We have a cat door installed, so the cats have access to the outdoors all the time, though they both spend most of the day and night indoors. So Talya can get out if she wants.

Bingo, unlike Willy, is not a wanderer and, with no other cats in the vicinity, feels no need to defend his territory. 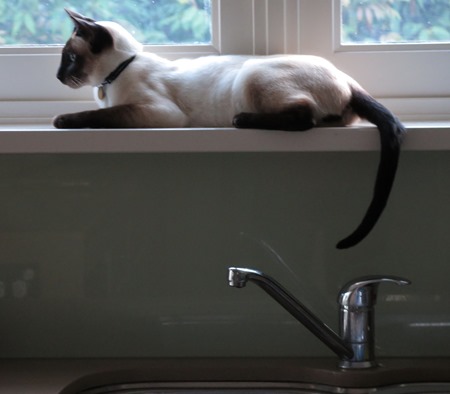 Feline ornament on window sill above the sink

It is impossible for us to place ornaments on shelves due to the wickedness of Bingo the cat, he’d knock them off and smash them in the blink of an eye, but he does look handsome being ornamental himself.

He’s not wicked all the time, in fact he’s sweet and smoochy often and adores attention and pats. And he’s a smart cat, picking out his particular toy unerringly from a cluttered drawer. He still retrieves too, and is quite insistent that you play along with him.

As for the 19 boxes of books I still had to unpack, I’ve managed to accommodate all but one box on new bookcases.  I purchased four of the Billy Series from Ikea – good solid shelves that look alright and were cheap to buy. 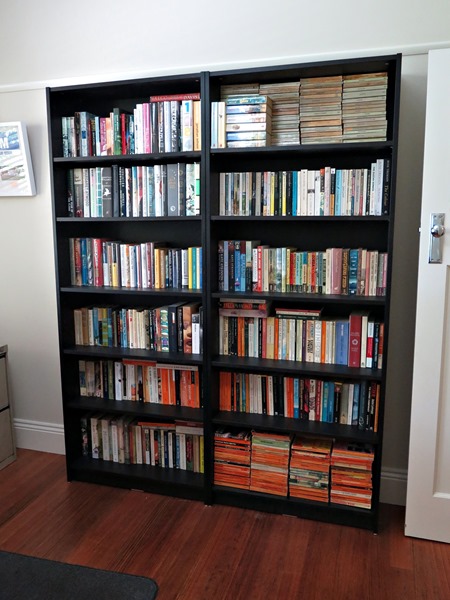 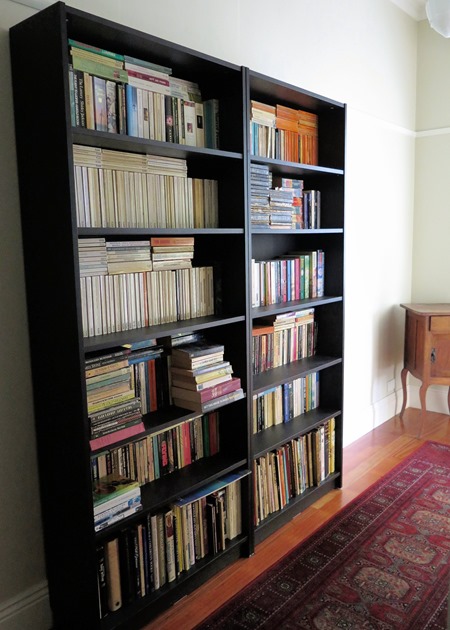 I like having a bookcase in the computer room as I can lean over and select a book I think might be of value and check it out on ABE Books. A surprising number of my long ago acquired books are worth quite a lot of money, first editions of Jack Kerouac (bought second hand) for instance are worth up to $200 US.

These days I buy first editions as they are published and recently received four new first edition hardcovers of favourite authors, one signed. They were the new John Crowley novel KA: Dar Oakley in the Ruins of Ymr, Tool of War by Paolo Bacigalupi, The Book of Dust: La Belle Sauvage by Philip Pullman and Gnomon by Nick Harkaway.

I’ve read The Book of Dust and Ka so far and loved them both.  Philip Pullman and John Crowley being masters of exquisite prose, are always a joy to read. Both books coincidently feature talking animals. In Philip Pullman’s alternate world each person is born with a Daemon, an animal familiar of some kind or another that represents their soul.

Ka is about a Crow named Dar Oakley, an immortal creature who relates the story of his long life to the unnamed narrator, who dying of some unspecified illness, is living in the end days of this planet, which has been destroyed by humankind’s heedlessness and wastefulness as witnessed over the millennia by Dar Oakley.

Still on the subject of books and animals, last night we went to a Christmas gathering at an old friend’s house. I gave the lady of the house a copy of KA for Christmas, and she gave me a wonderful calendar created by local Melbourne artist Elise Hurst, of whom I had previously never heard.  Flipping through the pictures I was astonished by the inclusion of a picture of a crow… 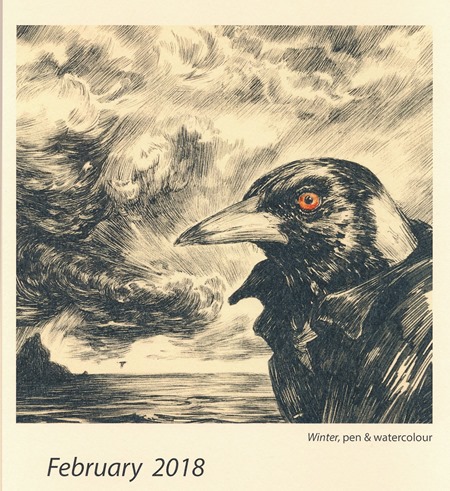 …a curious coincidence that was repeated when I studied the cover of the calendar more closely and noticed the fox incorporated into the hair of the girl. Shades of KA again, as one of the characters who has the ability to communicate with Dar Oakley is a girl he calls Fox Cap. 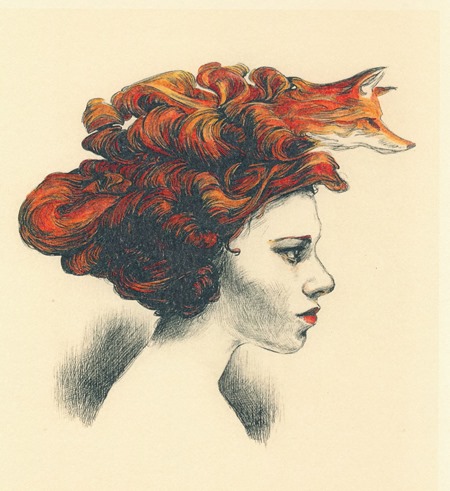 The other illustrations in the calendar all have an animal theme, and are heart tuggingly nostalgic.  They are endearingly whimsical and I’m delighted to have discovered the artist. I shall enjoy turning over the pages each month in 2018. 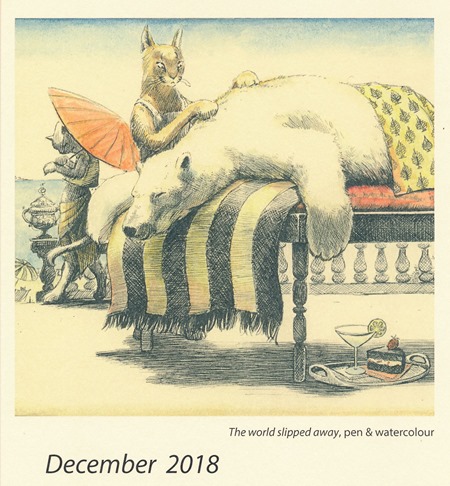 You can purchase a copy of the calendar from the artist’s website. She also has books and prints for sale, which are mighty tempting to buy – gorgeous stuff.

With Christmas day only a week away I wish readers of this blog a happy festive season and many delightful surprises in 2018.