Things to do on a Saturday Afternoon

I've been spending the afternoon alternately either listening to or watching horse racing. It's a big day on the autumn racing calendar with four of the races being broadcast on Free to Air television.

I've seen Haradasun beaten the first time this season. He couldn't catch the winner in the straight and appeared to be lacking his usual zip. He had to race wide all the way, which didn't help his chances. Better luck next time. Apache Cat won his race easily. My top 30 stable did well with a trifecta and a quinella as well as 4 wins, 4 seconds and 2 thirds out of 12 horses running today, which boosts my score card in the competition. I didn't have a bet on any of them, more's the pity.

Belatedly, here's my report on The Handsome Family.

It was another of those hot and steamy nights in Melbourne and the crowded band room didn't cool things down. It was a great show nonetheless and being up the front as is my preference I was able to take some interesting photos. 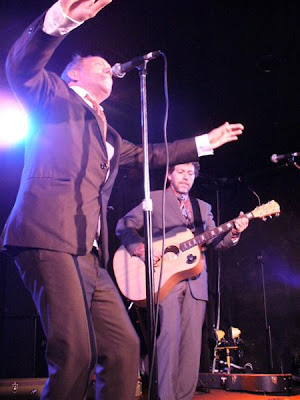 The support act were a duo called Darling Downs and gave a riveting performance. They comprised Kim Salmon on a guitar and Ron Peno as vocalist. Ron Peno has an amazing voice and a very individual style of singing. He was fascinating to watch. He waved his hands around, up and down, leaned into the microphone as his voice crooned or soared in a high-lonesome register.

The songs were wonderful as well - Appalachian ballads, weird songs of heartbreak and loss. They were a fitting act to compliment the Handsome Family. 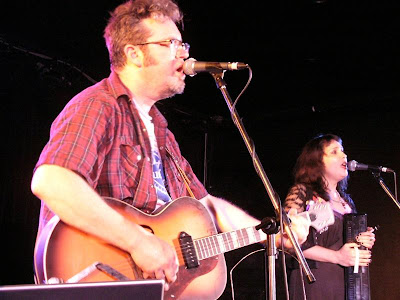 Then came the Handsome Family who are husband, Brett and wife, Rennie Sparks - complete with a laptop computer to generate sound effects and nuances into the mix, populated by chipmunks and squirrels as Rennie Sparks whimsically averred.

They are a droll couple and have a wicked sense of humour. Their songs, written by Rennie, have extraordinary lyrics - almost absurdist, but they somehow make sense and a lot of them have dark themes. Their latest CD Last Days of Wonder is described as:

"... a collection of love songs sung in airports, garbage dumps, drive-thru windows and shark-infested waters. The CD celebrates the little miraculous moments of beauty found in everyday life: a golf course shining in the rain, hanging lights bouncing in the breeze, pigeons singing from billboards, trees blooming in squares of dirt. The songs linger on those moments when we’re pulled from the ordinary to feel awed by mystery, bewildered by beauty, terrified by the vast unknowable around us (whether we wander through shady groves or crowded parking lots)."
~ Publicity Quote ~

Brett did most of the singing - he has a pleasant baritone voice - and Rennie sings background harmonies. They both provide musical accompaniment on a number of instruments

I did get to meet both of them and they were very friendly and unaffected.

It was a most unusual night's entertainment well worth the price of admission and the discomfort of standing for two and a half hours straight in steamy conditions.

On the subject of live music shows, someone sent me a recording of the Mary Gauthier performance at Northcote Social Club which I attended. It's a superb recording and, listening to it, I realise how very, very good that show was. One can really appreciate the beautiful and ornate guitar accompaniment of Thomm Jutz on this recording.

The interesting thing about hearing a recording of a concert one has attended, is that the concert itself is an immediate experience where you appreciate it happening now and are open to the power of expression of the artists live. Listening to the recording is different, though just as enjoyable. One can hear it all again at a distance and appreciate the nuances.

Last week Sharon Olinka, a New York poet, sent me her poem, Whittemore’s Smyrna and asked if I would like to add it to the Whittemore site. The site already has Helen Bar-Lev’s Jerusalem Whittemore poems, so I was only too pleased to add Sharon’s poem. Anything Whittemore related is welcome.

Whittemore’s Smyrna is from Sharon Olinka’s book The Good City. The poems in the book tell the history of Smyrna from an ancient cosmopolitan Mediterranean city to the modern Turkish city of Izmir. You can read more poems from her book here

Whittemore’s novel Sinai Tapestry has a harrowingly graphic description of the destruction of Smyrna on 14th September 1922. It is a little known atrocity. I had certainly never heard of it prior to reading Sinai Tapestry. Largely forgotten, it was overshadowed by the Second World War. Hitler is purported to have said, in support of his own plans for genocide,"Who, after all, speaks today of the annihilation of the Armenians?"

These days there are many sites dealing with the burning of Smyrna, though no one appears to be quite sure who lit the fires that burned the city. The Greeks say the Turks did it, the Turks say it was the Armenians and Greeks. Here’s a link to a comprehensive article on the event on Wikipedia

Tomorrow night I’m off to see The Handsome Family. The show is sold out, so no doubt I’ll have to stand for several hours. I’m supposed to be writing a review for Nu Country and fortunately I now have a penlight, so I’ll have no problems writing in the dark. I’ll report, hopefully with pictures, on Friday.
Posted by Anne S at 3:49 pm 3 comments:

Apologies for the long silence, I’ve been feeling uninspired of late – a period of the doldrums in terms of getting up the energy to blog. So here’s a triple whammy entry.

Last Saturday the autumn racing carnival featured the Orr Stakes, with an awesome line-up of contestants. It was hard to pick the winner, as all the runners had the form and ability to take out the race. The mighty El Segundo won it in the end.

There is no Autumn Super Stable competition running, so I’ve entered into the next best comp, the Top 30 where one selects a stable of 30 horses to follow. There are no constraints on one’s choices, so I’ve selected what I consider to be a very good stable. Thirteen of them raced last Saturday resulting in four wins, which included my old favourite Apache Cat and my current horse-to-watch, Haradasun. The latter has had two runs since coming back from a spell and has easily thrashed his opponents both times. He certainly appears to be something special, and is a very good looking young horse (see photo above). He’s got his own website too. It will be interesting to see if he lives up to the hype when he tackles more difficult races later in the season. His owners and trainer are not motivated by greed it seems, and have given him an easy entrée back into racing, for which they are to be commended.

For the past month I’ve been indulging in a reading binge of feminist science fiction. There’s quite a lot of it around and I have a fair collection of them in my personal library.

First off I read Elizabeth Vonarburg’s “The Silent City” and “In the Mother’s Land”. These books are related, the first being set in a post apocalyptic world where Scientists locked away in cities, manipulate human genetics to create a super being in the person of Elisa who is meant to be the redemption of mankind. Outside the cities the remnants of post apocalyptic humanity live in primitive societies where females outnumber men on a ratio of 50 to 1. Despite this women are still treated as cattle by the few males in power. It’s a tough world outside the cities and Elisa’s contact with it has far reaching effects on the people she meets, and she in turn is affected by her contact with the outside. It drives her to create a new species of human, like herself, persons who can heal themselves at will and metamorphose into anything they choose, including changing sex.

“In the Mother’s Land” is set 500 years after the events of “The Silent City” and a very different society has evolved. It is a civilised, matriarchal society where the sexes are kept apart except for reproductive purposes. Women still outnumber the men. It follows the life of a gifted young woman who delves into the past through following a career of archaeology.

Sheri S Tepper is known as an eco-feminist Science Fiction writer. Her novel, the “The Gate to Women’s Country” also depicts a matriarchal society where the women inhabit the towns and men live outside the walls in martial barracks. Tepper’s novels are always worth reading. Her style is quirky and her books are imaginative and original. She often takes ideas to unusual logical conclusions and generally inserts a surprise twist before the end. I’m currently reading her “Gibbon’s Decline and Fall” a surprisingly prescient novel considering that it was written in the mid 90s.

2007 started on a promising level with the release last week of two interesting new CDs from Patty Griffin and Lucinda Williams.

“Children Running Through” is Patty Griffin’s sixth general release. She is a remarkable songwriter and has a voice of amazing power. Her voice is the focus of this latest CD, and is demonstrated in many ways in all its glory. One track “Trapeze” is so beautiful it brought tears to my eyes. Emmylou Harris shares singing credits with Patty on this song and the sound of their voices intertwining is truly affecting. Patty Griffin croons, rocks, whispers and sings the blues, soul and rock n roll on this recording. She has never made a bad record and all her CDs are worth buying.

The new Lucinda Williams CD “West”, I must admit I have only listened to once. My first impression is that the songs have a sameness about them and lack the depth of her earlier stuff. It’s a very gloomy record, almost embarrassingly personal. Despite that, it makes for pleasant listening with mesmeric rock tunes interspersed with heavy rocking numbers. Reading reviews of the CD, opinions are divided between those who consider “West” Lucinda’s masterpiece and others who regard it as pretty much the same as her last two recordings “Essence” and “World Without Tears”, and not a patch on “Car Wheels on a Gravel Road” which is widely believed to be her best record. She’s certainly a highly individual artist.

I’d love to see her perform on stage, as apparently she is a great live performer. She was supposed to tour Australia some years ago, but cancelled when her mother died. It was most disappointing at the time, but one can console oneself with watching her live on DVD.