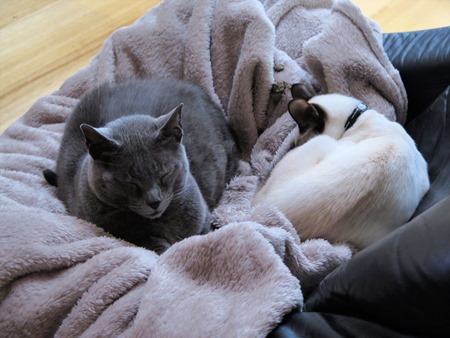 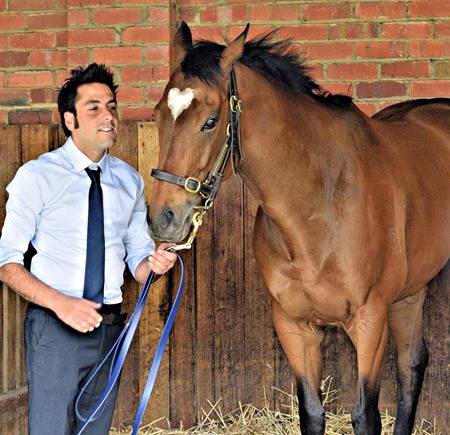 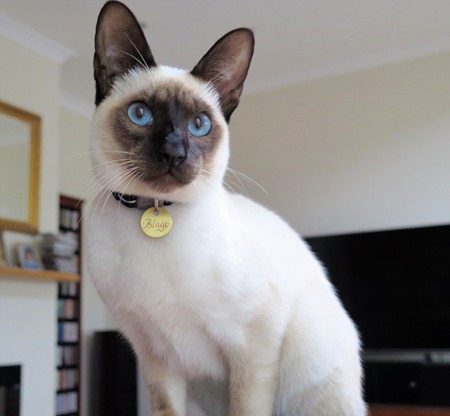 It’s all topsy turvy at the Cat Politics domicile with big changes in the offing, not to mention the continuing distraction of raising a crazy Siamese kitten.

Since his misadventure a month ago, Bingo has stayed close to home and mostly prefers to be inside pestering his human slaves and causing chaos than roaming the streets, unlike his predecessor Willy who, at the same age, tore around the neighbourhood with his kitten friend Pickle.

Siamese cats are known for their devotion to their humans and take an interest in everything that the said humans are engaged in, particularly cooking. I’ve never known such a naughty recalcitrant cat as Bingo, who refuses to learn the meaning of NO.

He’s grown big enough to jump on the kitchen bench and has to be locked in the bedroom if you are cooking anything. I’ve had to wrestle with him over a block of cheese, which he stole while my back was turned for a second, and he has such a keen appetite that he also has to be locked away to eat, as he’ll try and steal Talya’s dinner after he’s finished his own.

He still likes to play fetch with whatever is to hand, in fact he’s addicted to it, and my hands have become a mass of scratches as he tries to snatch the toy back after dropping it at your feet.

As I write, he’s up on the antique dresser rummaging in a old teapot filled with five cent pieces, flipping the coins out with his paw. 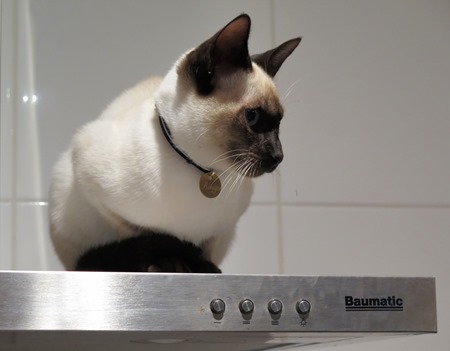 Bingo atop the range hood

Speaking of Talya, she has taken to tearing her fur out again. The poor dear is stressed by Bingo’s antics, particularly when they involve her, even though he’s just playing.

She’ll be even more stressed in a couple of months when Cat Politics moves to a new location in another suburb. 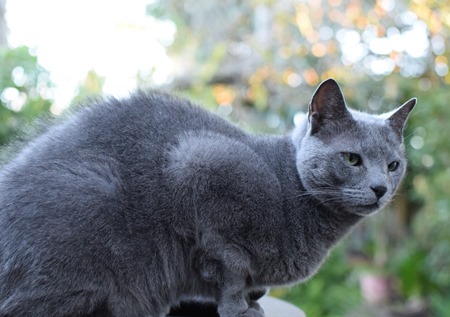 This all happened very fast, when B took a fancy to a house in Ivanhoe and practically purchased it on the spot. Then he sold the current house off market in no time flat, at least saving us the inconvenience of the real estate hoop lah of keeping the house spotless and enduring inspections, if he’d gone to auction.

I’m still rattled by this as I like where we live at present, public transport heaven for a person who doesn’t drive a car and likes to be independent.  There are two train lines, two tram lines and three buses all within easy walking distance, which will take you anywhere in Melbourne.

We’ve been here for almost 31 years, so it will be a big change for me as I’m not familiar with Ivanhoe at all and doubt the public transport situation will be as convenient.

However, the house itself is very nice and much bigger than the current residence,  with stacks of storage space, which has always been lacking where we now are. The house dates from the 1920s so is quite Art Deco inside, and it even has picture rails among its other charms.

All this has been very distracting, and along with the wintry weather, leaves me feeling quite saturnine – gloomy and unenthused by the usual things I find amusing.

I’m  looking forward to the Spring racing season, with fairly interesting  build up races scheduled fairly soon, though the first of the Group 1 races will not occur until early September.