Winx & Day Two of The Championships 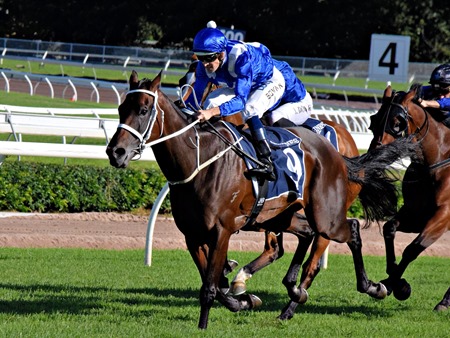 Winx on her way to winning the 2017 Queen Elizabeth Stakes

Much as I would like to be there to witness Winx match Black Caviar’s record of 25 straight wins, economic prudence compels me to forgo the pleasure.

In her final appearance for the autumn racing carnival, Winx will be aiming to win her second Queen Elizabeth Stakes, 18th Group 1 and 25th race in succession.

It’s hard to believe that the wonder mare has finally reached this milestone, as it seemed so distant back in 2015, when I first had the thrill of seeing her winning her first Cox Plate. That was her fifth consecutive win, and now twenty races later, she hopefully will remain unbeaten. Go Winx!

Winx faces nine rivals in the 2018 edition of the Queen Elizabeth Stakes, and has drawn the outside gate. That should not be a problem with her pattern of racing, midfield and generally a bit wide, to avoid interference.

The most threatening of her rivals are Happy Clapper, Humidor and Gailo Chop, all of whom she has thrashed in the past.  Of the rest, Japanese import Ambitious and her stable mate Comin’ Through, on form, could be in the finish.

As well as the  QE Stakes, there are three other Group 1 races on the card - the Australian Oaks, Sydney Cup and Coolmore Legacy Stakes.

First up is the Australian Oaks, run over 2400 metres. Last year it was won by New Zealand filly Bonneval who previous to that victory had won the New Zealand Oaks.  This year’s New Zealand Oaks winner, Savvy Coup is aiming to emulate Bonneval  and three previous New Zealand winners (Sofia Rosa, Gust of Wind and Rising Romance) on Saturday, and on that effort looks a top chance.  The NZ Oaks runner up Contessa Vanessa is also worthy of consideration.

The Sydney Cup, like its Melbourne counterpart,  is run over 3200 metres and a hard race to assess, with the majority of the field hailing from outside Australia, albeit  adapted to Australian conditions.  Last year, the race was declared void after the unfortunate breakdown of Almoonqith shortly after the start, which caused Who Shot Thebarman to lose his rider and raced riderless.  Let’s hope that scenario is not repeated this year.

Top pick is 2016 Melbourne Cup winner Almandin, who looked back to his best winning the Group 1 Tancred Stakes, and is proven over the distance. Likewise old Who Shot Thebarman who has finished second in the Sydney Cup on two occasions in 2015 and 2017. Even at his age (nine) he could well run a place again. Almandin is the class stayer in the race, but he is top weight on 57 kilos, and there are lighter weighted horses who will aim to topple him, such as the New Zealand stayer Sir Charles Road and Japanese visitor Pre Stwick, along with the usual suspects Auvray, Aloft , Libran and former New Zealander, now with the Chris Waller stable, Patrick Erin.

A classy field of 16 mares and one filly will contest the final Group 1 race of the day. This is the Coolmore Legacy Stakes, formerly known as the Queen of the Turf Stakes, and it is run over 1600 metres.

Foxplay won it last year from Zanbagh and Dixie Blossoms. These three are all in the field with new challengers such as Victorian mare Spanish Reef who has won her last three starts.  Others likely to be in the finish are Daysee Doom, Silent Sedition, Oregon’s Day and Prompt Response. The sole filly Alizee has been somewhat disappointing this autumn, but does have a 2.5 kilo weight advantage and is being touted as a live chance by her trainer James Cummings.

It looks to be another fabulous afternoon of racing that will be run on a good track, quite a contrast to the usual wet tracks that generally plague Sydney’s Autumn Racing Carnival.

What a fantastic afternoon of racing from Sydney it was, with Winx achieving her 25th win in succession in the Queen Elizabeth Stakes, and doing so with consummate ease, defeating race leader Gailo Chop by almost four lengths. She gave the field a big start, racing at the tail  until near the turn into the straight, where, as she usually does, she came wide around the corner and tore away in a trice to score another amazing win. Happy Clapper ran third a half length away.

Chris Waller had a very successful afternoon winning three of the four Group 1 races, with Unforgotten winning the Australian Oaks from Hiyaam and Miss Admiration, and tough old trooper Who Shot Thebarman winning the Sydney Cup at his fifth attempt, beating outsider Zacada by a whisker with Sir Charles Road running third.

The Coolmore Legacy was won by the filly Alizee who took the prize by a comfortable two lengths from Prompt Response and Heavens Above.

Happily there are no immediate plans to retire Winx, so we’ll hopefully get to see her again in the spring where one of her targets will no doubt be a fourth Cox Plate. 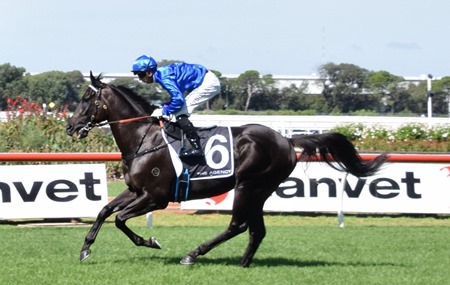