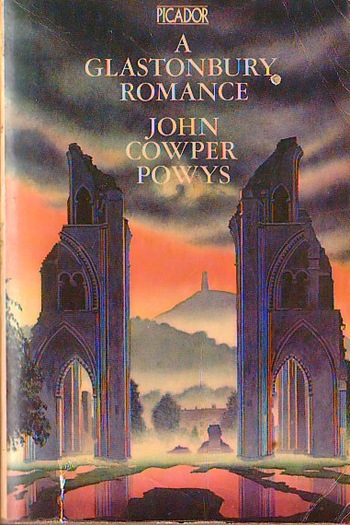 I first read this monster (1120 pages) of a novel back in 1975 and was  really taken by it then. It has resonated in my memory over the decades, and though I haven’t, until the last week or so, picked it up to read again. I’m glad I did.

It took me about two weeks of leisurely reading (a few hours a day) to reach the end, but each time I put it down, I felt its allure and longed to get back into it.

A Glastonbury Romance is by no means a page turner in the usual sense, being verbose with many digressions from the story line in philosophical meanderings. However, it has enormous presence and a highly charged atmosphere throughout.

John Cowper Powys was an interesting fellow; a novelist, poet, philosopher and critic. He wrote many novels, all rather substantial, and though I have a good collection of his other novels,  A Glastonbury Romance is my particular favourite.

The novel is set in the small town of Glastonbury in Somerset and follows events in the lives of its residents over course of a year.

Glastonbury is notable for its association with Arthurian myths involving Joseph of Arimathea and The Holy Grail and A Glastonbury Romance uses this as its main theme.

Powys himself described the novel as being primarily about the Grail:

Make of that what you will, but I generally see the novel as a good BIG read. A Glastonbury Romance has a huge cast of characters, the principal protagonist being John Geard a mystic and preacher , who having been bequeathed a large sum of money, uses this windfall to create a new religion based on the Grail. He’s a memorable character with his mystic blood and guts religious fervour; his nickname is “Bloody Johnny” culled from his frequent use of the expletive “Blood of Christ”

Opposed to Geard is Philip Crow, who represents the capitalist, pragmatic side of the political spectrum. He is an industrialist and cares nothing for the myths and legends that dominate Glastonbury and wants to build a new bridge to replace the ancient Bridge Perilous, opens a tin mine in Wookey Hole, and owns several dye manufactories.

But that is only two characters among many. They are all remarkable in one way or another. A Glastonbury Romance is rich in detail, from exquisite glowing descriptions of the landscape to complex characterisations. As I said before, the novel has a highly charged tone and contains many dramatic scenes that are vivid and thrilling.  It’s got more than its fair share of sex, politics, religion and mysticism, as well as the odd magic realist moment.

It’s certainly not to everyone’s taste, but if you like big complex novels that explore large themes, then A Glastonbury Romance may appeal.

The following passage from the novel is one that has remained with me since 1975, though I had confused its setting in my head, associating it with a different set of characters and set in a different dwelling. It describes a bowl of bluebells and gives you some idea of the power of Powys’ prose.

In the centre of the kitchen was a bare deal table, the well-scrubbed top of which had assumed, so soft and friendly did it look, the whiteness of a pail of rich cream. On this table was a huge glass bowl filled with an immense,  tightly packed mass of bluebells. The gorgeous blueness, a deep Prussian blue mingled with blotches of purplish rose up like a thickly packed cloud of almost opaque essence  out of this bowl of heavy-drooping blooms and expanded and expanded  till its richness of tint attracted towards it and seemed utterly to absorb all other coloured things in the room. It dominated the gleam of the shining pots and pans of that small kitchen as completely as its fragrance overpowered the smell of the cooking.

If this post has piqued your curiosity, there is an interesting and perceptive article by Margaret Drabble on John Cowper Powys, which appeared in the Guardian in August 2006, and is well worth reading.

If you’re revisiting Cat Politics you would have noticed that I’ve given it a new look. I was rather tired of the old look and as I had stubbornly maintained it (the classic template) for so many years, I was unable to add all the new gizmos and gadgets that are available with the new templates.

I do notice, however, that my labels appear to be rather dull, something I will have to amend as I write more posts.

Also I’ll have to reinstate all my links, which for some reason were not updated with the new template.

Anyway, I hope you find it easier to read and continue to do so.

I’ve spent several weeks fiddling with the template without committing myself to it. So I’m glad it’s finally done. 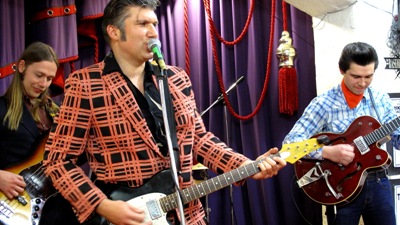 Described elsewhere as “ sounding like a spaghetti western blended with a Beach Boys sex party”, Mikelangelo and his band The Tin Star performed a very entertaining set at a well attended in store performance at Basement Discs at lunchtime today.

I have had the pleasure of seeing Mikelangelo previously with his other band The Black Sea Gentlemen when they played an in store in 2005, so was delighted to see him scheduled this time round.

Mikelangelo has a larger than life on stage persona. He’s extremely funny for one, and a snappy dresser (dig the jacket!) for another. And his music is lively and enthusiastically played – western surfing music indeed, reminiscent of 50s bands The Atlantics and The Shadows given a Balkan twist. The first tune played (an instrumental) was called Balkan Beach Party, then Mikelangelo got confessional with a song about his conception and birth pulling no punches in the lyrics, which were quite explicit.

The Tin Star are a four piece band and generally include female singer Saint Claire who was not present today, suffering ill health. So today was just the boys, including Fiete Geier on lead guitar, Gareth Hill on bass and Pete Olsen on drums.

Check them out on My Space and also visit Mikelangelo’s blog Secrets of A Gentleman for fashion tips. 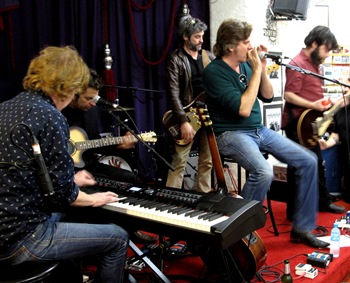 I haven’t written about music for a while, in fact I’ve neglected to mention the last few Basement in store performances, which were as usual excellent and starred Nick Charles on one instance and Tracy McNeil on the other.

Today however was a special occasion where acclaimed Australian rocker, Tex Perkins with his band The Dark Horses were showcasing songs from their latest self-titled CD at a lunchtime in-store at Basement Discs. It was well attended – quite a crowd was there to hear a fabulous half hour or so of music. I was not sure what to expect, having never really followed Tex Perkins’ musical career, which has included fronting iconic bands The Cruel Sea and The Beasts of Bourbon.

I was pleasantly surprised. The music was warm and soulful and full of rock n roll goodness. Tex has a great rock voice, somewhat ragged and gravelly but powerful, and the Dark Horses provided solid backing in the guitar and percussion, not to mention keyboard departments. Somehow all six of them managed to squeeze on to the tiny Basement stage.

It was worth braving the chancy Melbourne weather to attend.

Whilst I was waiting for the tram home outside the GPO, I was fortunate enough to hear a very talented young singer, performing close by. Named David Shaw, he must have been all of 15 years old, but he could sing like an angel. 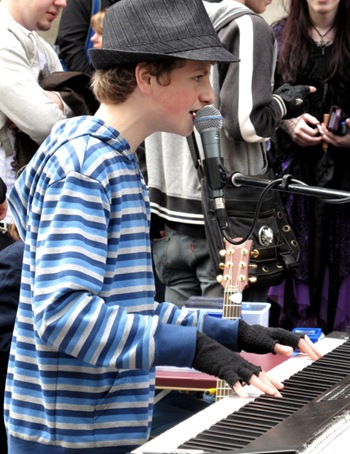 He had one of those beautiful, powerful emotive voices – it reminded me of Patty Griffin –and used it to great effect. I was enormously impressed. Remember the name David Shaw, I’m sure he’ll be a star one day.
Posted by Anne S at 8:34 pm 2 comments:

Some months ago I ordered a book as a gift for a friend from Small Beer Press, a small independent publisher in the USA. As usual, when the book arrived, they had included in the package an assortment of oddments, like A Working Writer’s Daily Planner , an ARC (advanced readers copy) of a novel called The Liminal People, several promotional postcards  and an attractive  bookmark, masquerading as a ticket to the Cirque  Mechanique, which intrigued and charmed me. There is a web address –www.circus-tresaulti.com- on the ticket, but somehow I kept forgetting to investigate it.

Last week, I read Jeff Vandermeer’s short reviews of recommended science fiction & fantasy books for summer reading on the New York Times web site.  One of the books on his list was Mechanique -A Tale of the Circus Tresaulti whereupon I realised what the bookmark was all about and set about acquiring a copy of the novel.

One of the best things about having a Kindle is that one doesn’t have to wait for books that are unavailable in Australia to arrive from overseas. In some cases this can take up to three weeks. Sure, it’s pleasant to anticipate a package, but then again why wait.

One of the postcards contained in the Small Beer Press package was promoting Weightless Books, an indie press ebook store. So there I surfed and found Valentine’s Mechanique for the princely sum of $4.99. In a trice I had it downloaded and loaded onto my Kindle. It’s also available on Amazon (UK and com).

So was it worth it? Well, for $4.99 you couldn’t really complain if the book was not up to expectation, but Mechanique turned out to be a real gem, a keeper. I’m tempted to buy a hard copy of it for my book collection. 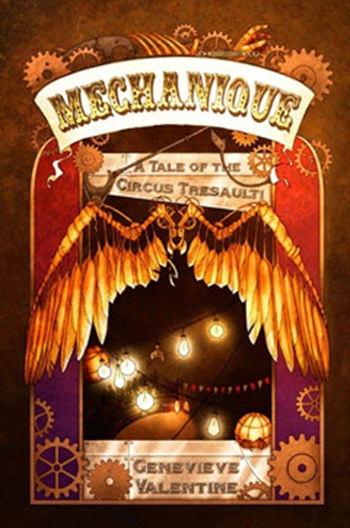 I finished reading the book this morning, emerging as if from a dream, having been thoroughly immersed and seduced by Genevieve Valentine’s tale of an unusual circus troupe travelling through a world devastated by war .

The circus performers are mechanical in the sense that they have been enhanced with metal, wire , cogs and gears, but retain a fragile humanity.  They can die, but they can also be reincarnated and they refer to themselves as having the bones.  What having the bones means is gradually revealed over the course of the novel. To keep up appearances those artists who are unmodified wear metal gloves and shoes or in the case of Little George,  walk around in brass legs.  They are manufactured, so to speak,  by the female circus ringmaster  Boss, though that is not her real name. Boss is somehow magically gifted in the art of raising the dead and mending her broken creations.

Of all Boss’s creations , it is the flying man that haunts the novel. The original flying man, Alec, is only present in the story as a memory, a powerful memory at that. He fell, and the repercussions of his fall are a poignant thread throughout the book.

Mechanique is certainly a strange and wondrous novel, but is very well written and  strongly character based. Despite their obvious mechanical enhancements each character possesses a psychological depth that causes the reader to willingly suspend disbelief. The novel proceeds as the circus moves, from place to place and from one character’s point of view to another. It reminded me somewhat of Angela Carter’s Infernal Desire Machines of Doctor Hoffman – it has that same feel of exotic location.

It’s a melancholy novel, quite heartbreaking. As I said before it’s a gem and a delightful discovery for me of a new writer I had not previously come across.