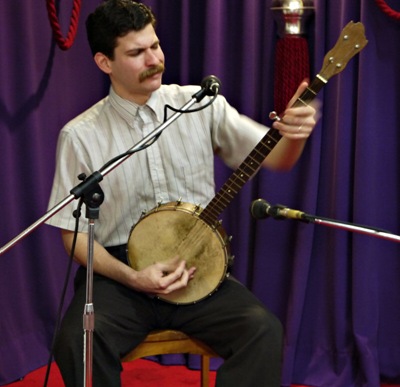 It’s already two weeks into December and I have been slack on the blogging front. To catch up slightly, a little spiel about Frank Fairfield, a young multi instrumental musician from Los Angeles.

Frank was playing at the Basement Discs on Friday last, and delivered a pleasant mini concert, showcasing his astonishing skills on banjo, fiddle and guitar, as well singing a selection of the songs he loves from yesteryear.  He looked the real deal, dressed conservatively in button up shirt and exhibited a modest demeanour.

He sounds like someone out of the backwoods, but he is Californian by upbringing and has a love for music forgotten in time.  For instance, the tragic tale of Poor Ben, where a child is sent out at various hours of the night to fetch his father from the pub, whilst his brother Ben is dying at home.

Here’s a video of him performing Rye Whiskey, another of the songs he sang last Friday. It has wonderful lyrics.