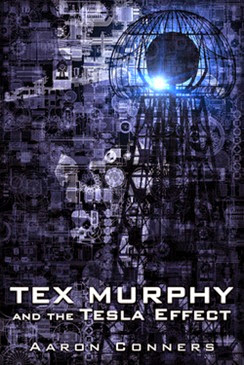 …and now I’ve read the book.

I’ve been awfully remiss in keeping up this blog, feeling uninspired as regards putting words on screen.

However, I thought I’d post about Tex Murphy and The Tesla Effect – a novelisation of the recently released game, written by Aaron Conners.

Even though I had pre-ordered a signed copy of the novel from Aaron Conners website, I couldn’t wait to read it, so downloaded the eBook version for my Kindle as soon as it was available.

I was half way through the novel when my Kindle gave up the ghost - somehow or other the screen broke. Either I sat on it or one of cats walked on it. Anyway it was irreparable, so I ordered a new one, which arrived remarkably fast, but in the meantime I was able to continue reading the book on my iPad, and finished it before the new Paperwhite Kindle arrived.

Remarkably good in fact -  a wonderfully written, page turning thriller, with an engrossing story and complex plot. Aaron Conners is underrated as a writer, as you don’t really expect the novelisation of a computer game to be anything special. But Aaron Conners succeeds brilliantly, maintaining the right balance of tension and drama, demonstrating fine storytelling skills worthy of more noted writers.

Think noir detective fiction ala Raymond Chandler, but set in a dystopian future San Francisco rather like the Blade Runner universe.

My name is Tex Murphy and I’m a PI. Somebody, somewhere screwed up and sent me here about a century too late. I should be driving a ‘38 Packard with a running board and whitewalls.  Instead I fly a ’38 Lotus speeder. At least I wear the right uniform – soft felt fedora, silk tie, rumpled overcoat and wing tips.

Tex Murphy in the game is played by Chris Jones and he has made the character his own, so when you read the novels, which are written in the first person, you hear and see Chris Jones in your head. If you haven’t played the games, you’ll get into the character pretty fast and perhaps envisage Chris Jones too –he’s an amalgam of Phillip Marlowe and Rick Deckard and their ilk.

In Tesla Effect, as well as feeling out of his century, after being mugged, Tex regains consciousness with seven years of his recent past wiped from his memory. He thinks it’s 2043 when really it is 2050.

Is it the bump on his head  or the strange injection marks on his arm that has caused his memory loss?

The novel and game both begin with that setting, but from there on they  diverge.

In the game the player as Tex faces many obstacles in his quest to discover what happened to him. He is also desperate to find out the  fate of Chelsee (who was with him at the cliff hanger ending of Tex Murphy Overseer).  And so it is in the book, though how the story unfolds is different to the game and Tex’s new female sidekick and love interest, Taylor, plays a much bigger role in the novel than she does in the game.

In all, the novel is more satisfying than the game, the true canon so to speak in the continuing adventures of Tex Murphy Private Eye. It has a perfect ending that does not match any of the multiple endings of the game.

You don’t have to have played the game to appreciate the novel. It stands on its own merits as an engaging read in the Detective genre. I also recommend the earlier novels Under A Killing Moon and The Pandora Directive which will be reissued by the end the month in both eBook and physical formats.