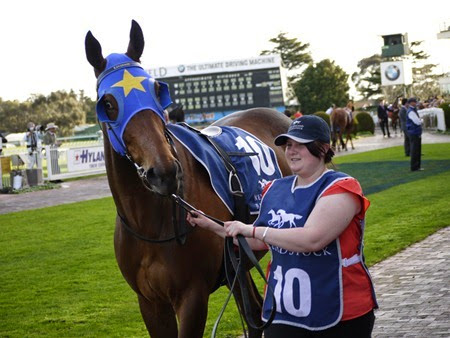 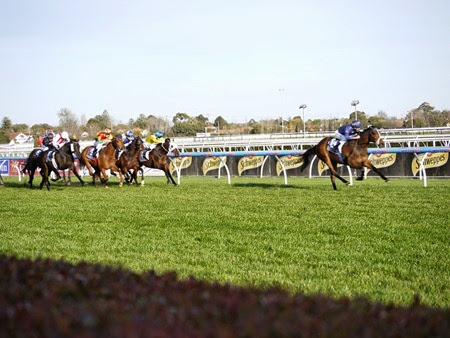 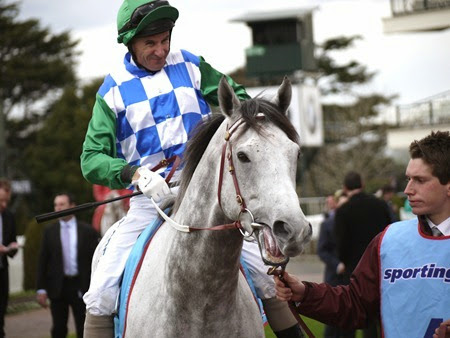 The Wide Open Spaces of Flemington 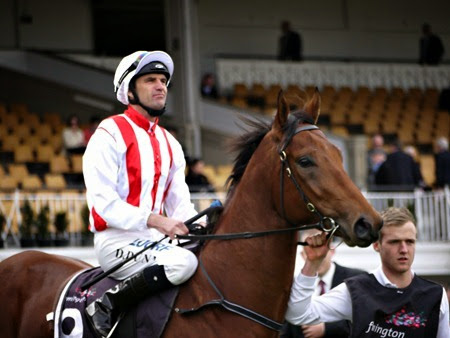 Beluga Caviar – a close relative to you know who

Psyching myself up for the Spring racing carnival, which will take off in earnest in two weeks, I decided to test if my Flemington season pass was working, so headed off to the big track yesterday.

By no means first class racing, it was however a moderately interesting meeting with the feature race being the Group 3 Aurie’s Star Handicap, run over 1200 metres.

It was scheduled as Race 7, but as I arrived in good time to place a bet on a runner in the third race, the Trevor Dray & William Nield Handicap, I was obliged to stay for several hours to witness the main event. The time flitted by pretty fast.

Race 3 was for fillies and mares and run over 2000 metres. My selection Reckless Assassin romped home the winner 1½ lengths from Zazparella with Anfitriona running third, so I was pleased to see my afternoon at the races start on a winning note, even though my luck went down from then on. 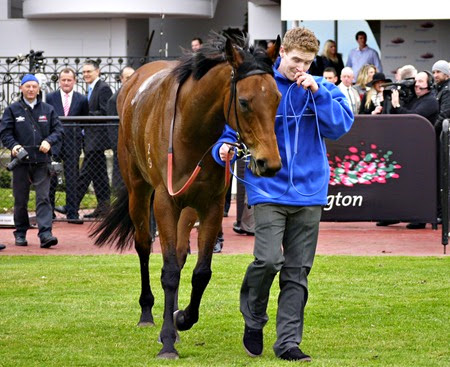 Reckless Assassin being paraded after her win.

I was interested in witnessing the next race, the Joyann Erskine & Philip Carroll Handicap (1400 metres) due to the presence of Beluga Caviar, a three year old colt who is a close relative to Black Caviar. His dam Scandinavia is Black Caviar’s grand dam. Beluga Caviar was having the second start in his career. At his debut he ran third and yesterday he scored that placing again. So. he’s no Black Caviar or All Too Hard, but it’s early days yet. He’s a big boy and quite a good looker. 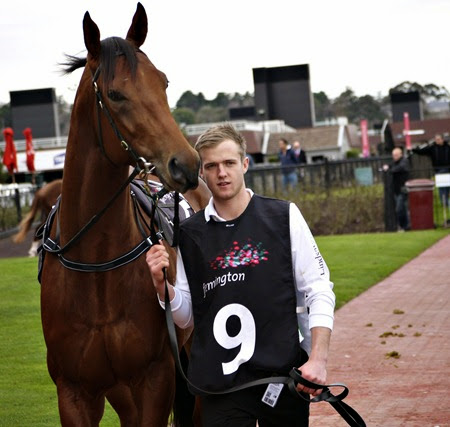 Beluga Caviar in the mounting yard

The race was won by the sole filly Fontein Ruby from Coram. 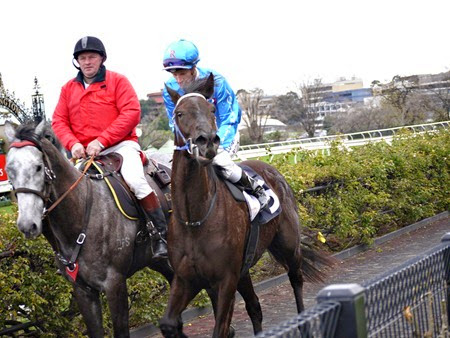 The fifth race was an open sprint over 1200 metres. I had my money on Hot Mama who only managed to run sixth. The race was won by Play Master, who I must admit I hadn’t even considered as a chance. 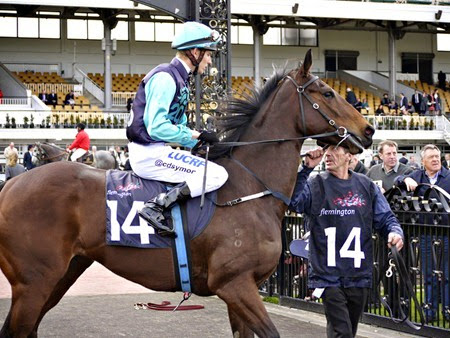 Hot Mama on her way to the track

I didn’t bother having a wager on the next race, rather I was more interested in the Sydney races at Randwick where two much more interesting races were featured. The first of these was the Listed The Rosebud for three year olds over 1200 metres. It had a crack field of classy colts and fillies that included the unbeaten Inkling, Sarajevo and Nayeli who I had witnessed winning the Group 3 Chairman’s Stakes in Autumn. The race was won by long shot Scissor Kick, from Better Land with Inkling running third.

The other Sydney race, the Group 2 Missile Stakes was the pick of the afternoon with a fabulous field of Autumn and last Spring stars resuming, including Boban, Hawkspur, Rebel Dane, Kirramosa, Sweet Idea and Weary. Sweet Idea led from start to finish and managed to hold off a challenge by Messene to win, with Rebel Dane (who started as favourite – again!) running third.

Back at Flemington, the Aurie’s Star was about to start and the runners were assembling in the mounting yard. 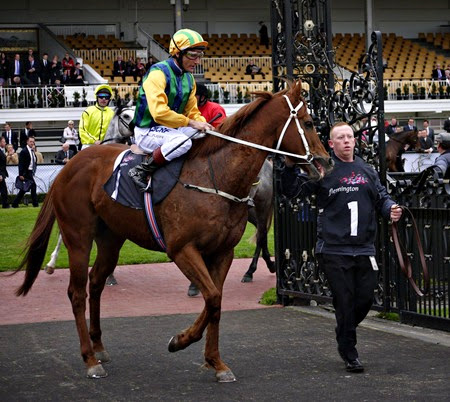 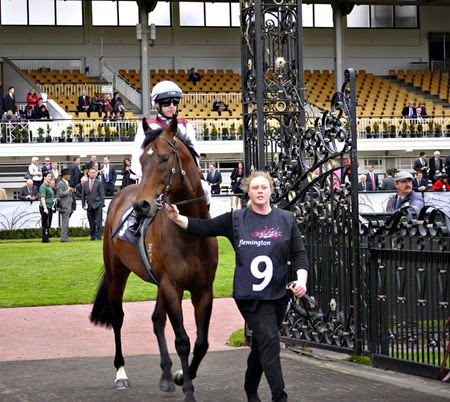 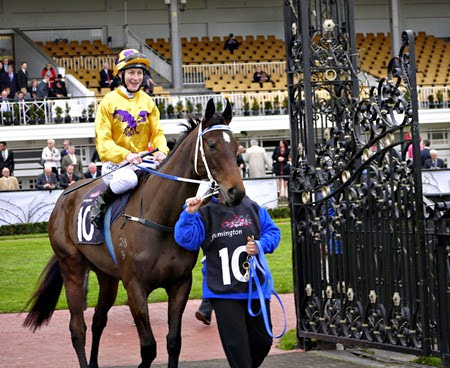 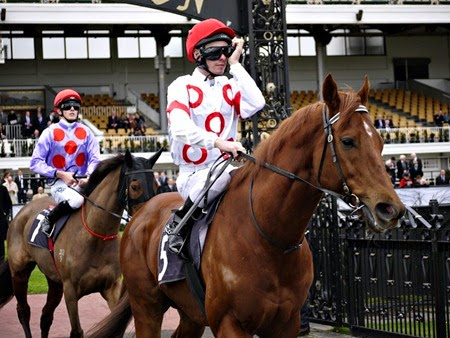 I didn’t wait for the horses to return to scale after the Aurie’s Star, but left for the station. As I’d had my money on Shanghai Warrior , I didn’t have to wait for a collect.

Despite not being an overly successful afternoon at the races , it was pleasant being back at Flemington. In case you’re wondering, the weather was overcast and the track was rated good. However a very chilly wind was blowing over the wide open spaces of the public lawn.

Next weekend a much classier race meeting is scheduled at Caulfield with the Group 2 P B Lawrence Stakes (formerly Liston Stakes) as the feature. Also on the cards is the Group 3 Vain Stakes (for colts and geldings) and the Quezette Stakes (for fillies), which always make for interesting viewing in terms of Golden Rose/Guineas prospects.