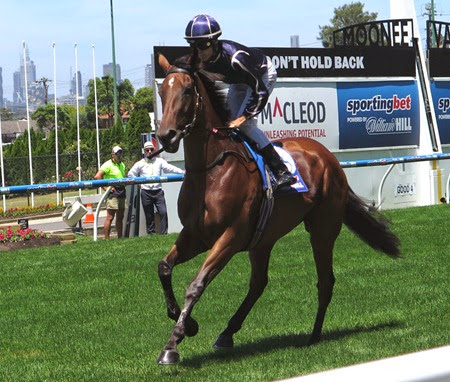 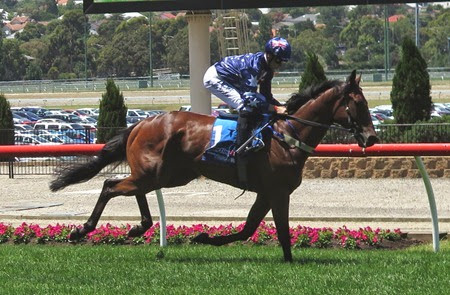 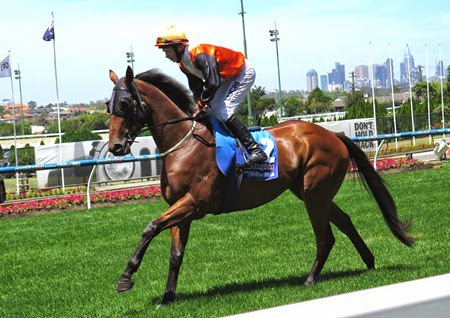 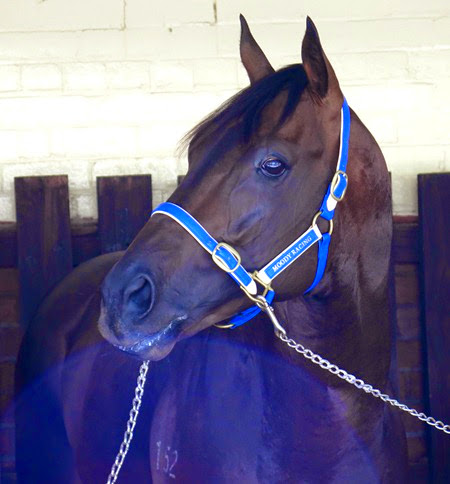 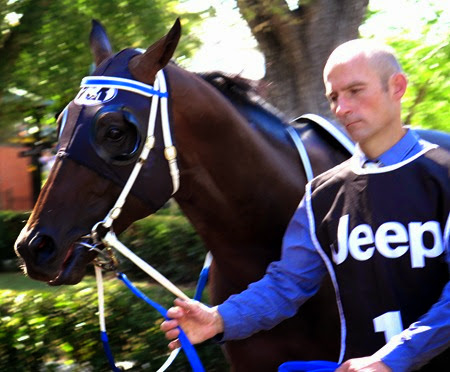 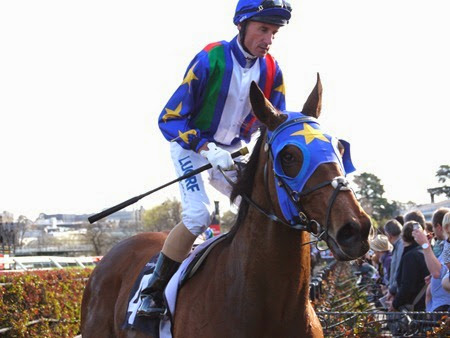 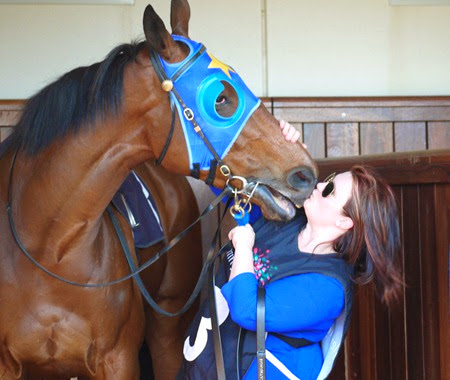 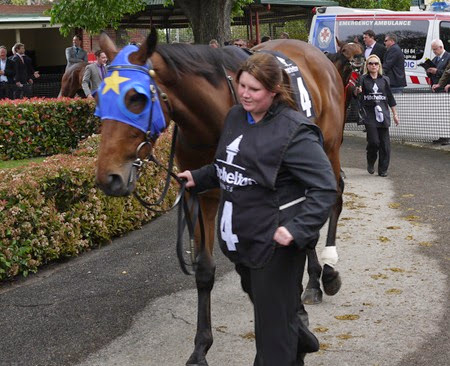 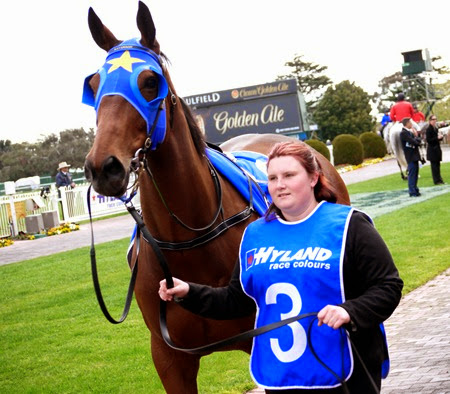 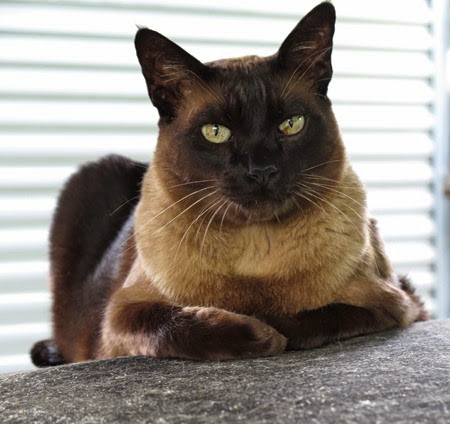 I meant to write a post before the New Year, but somehow time slipped away and I didn’t get around to it.

2014 was a pretty good year for me, only marred by the deaths of two friends, who are still mourned and will live on in my memories. I hope 2015 will not be as stressful in that way, and that my friends, family and pets continue to survive in good health and spirits.

Willy, pictured above, will turn 11 in January and this month will also mark the second year that Talya, the Russian Princess, has been part of the Cat Politics domicile.

The happy cat herbal medicine appears to be working and apart from a fracas yesterday morning the cats seem cool and calm in the main. 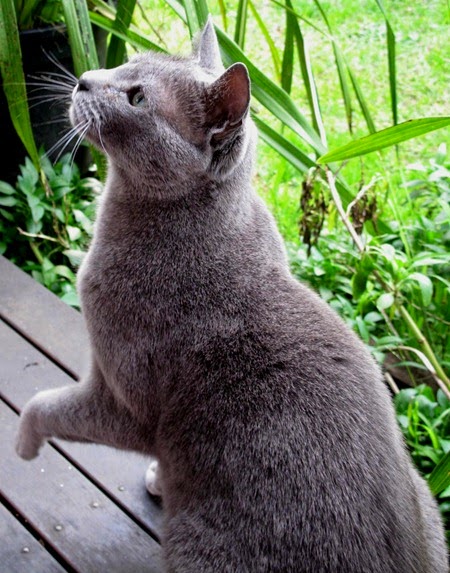 The fracas occurred when both cats were sprawled on the bed in close proximity and Willy misinterpreted Talya’s body language as a threat. She was actually sneezing or coughing, but he thought she was hissing at him so he advanced on her personal space and the inevitable happened with much sound and fury on Talya’s part.  She sprang off the bed with Willy in hot pursuit and hid under it, shrieking. I persuaded Willy to back off and eventually, as breakfast was in the offing, Talya emerged as if nothing had happened and the cats milled around my ankles as I dished out their food, all aggro forgotten.

Monty the cat next door has been hanging around in our back garden quite a bit, but both he and Willy appear reluctant to come to blows. If they’re facing off on the fence, Willy allows me to lift him down without any fuss and wanders inside without a backward glance. When I got up the other morning I discovered Monty lounging on the back door step. The resident cats were outside as well, looking on, but not game enough to dislodge him. When he saw me he slunk off, which gave Talya and Willy their chance to pester me for breakfast. 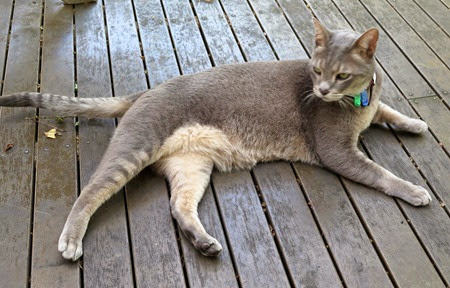 Monty lounging on the decking outside the back door

On other matters, this time last year I was anticipating new novels from two of my favourite writers, those being David Mitchell and William Gibson, and I’m pleased to say that neither novel  was a disappointment. In fact The Bone Clocks (David Mitchell ) and The Peripheral (William Gibson) are among the best books I read this year, both being wonderfully written and interesting throughout.

Another book that glows in my brain is Tigerman by Nick Harkaway, a book about fathers and sons with the most unusual super hero in literature. This was the last book I read in 2014, and it is up there with the best. Nick Harkaway is the son of John Le Carré and has written three novels so far – The Gone Away World, Angelmaker & Tigerman-  all of which I have read and enjoyed. He’s a writer I’ll certainly be following in the future.

H is for Hawk by Helen Macdonald, which won the 2014 Samuel Johnson Prize for Non Fiction and the 2014 Costa Prize for Biography, is a standout. It’s a beautifully written memoir wherein Helen Macdonald, in the wake of her beloved father’s death, describes in glittering prose how she tried to cope with her grief by acquiring and training a goshawk.  As well as detailing her life with Mabel her goshawk, she muses on the sad lonely life of T. H. White who also wrote a book on training a goshawk in the 1950s, but is famous for his series of Arthurian novels collected under the title of The Once And Future King.

I’m still waiting for the 25th Anniversary Edition of John Crowley’s Little, Big, despite being hopeful at the beginning of last year it would be published in 2014.  Dare I hope to see it in 2015? It is after all 10 years since I subscribed to it, but surely will be worth the wait.

Speaking of collectable books, I was able to get a signed first edition of William Gibson’s The Peripheral, being alerted on Twitter by a Gibson fan that Barnes &  Noble had them available for pre-order. I was delighted to finally have a long desired, signed edition of one of his books.

And I lashed out on a slip cased, limited, numbered and signed edition of The Bone Clocks, which arrived on Christmas Eve - a nice present to myself.

There are several books I’m looking forward to in 2015. The final book in Hilary Mantel’s Thomas Cromwell trilogy, The Mirror and the Light, will possibly be released this year and Kate Atkinson is mooted to have new novel as well, about one the characters in Life After Life.

And I’ll have to clear another largish space on my bookshelf for Neal Stephenson’s new novel titled Seveneves, another 1000+ page novel due in May 2015. I like collecting his books in hardcover editions, even though they take up a lot of space, but they look wonderful on the shelf and are highly collectable, Stephenson being a nerdish cult hero. 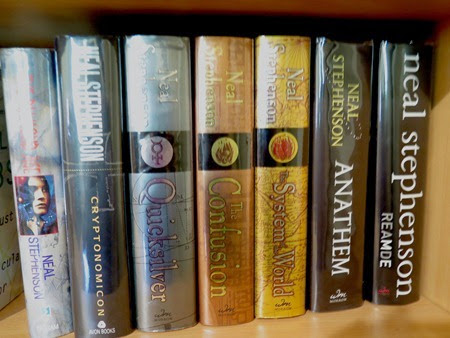 No doubt there will be more good reads in the offing, and who knows there may be a new author out there who will blow me away.

With 2015 being barely begun, who knows what is in store in the next 12 months. I’ll no doubt be spending some of it at the racetrack. The Magic Millions 2 and 3 year old (outrageously rich) Classic races are scheduled on the Gold Coast this Saturday. I haven’t a clue as to who the likely winners will be, but they’re always interesting to watch.

The first Group 1 of the 2015 Autumn racing carnival is only a little over a month away, so there’s lots to look forward to on the racing scene.

With that, I wish readers of this blog (if there are any) good fortune, good health and happiness in 2015.