Emerging from the miasma

For the past two weeks the Cat Politics household has been under the grip of an Influenza epidemic, which certainly killed any incipient Christmas  spirit in its tracks. It was horrible while it lasted, but we’re now emerging – just in time for Christmas Day – from the miasma of misery that was a nasty dose of Flu. It had the works; cough, fever, aches, blurred vision, lack of appetite and zero inclination to do anything of an energetic nature. The only food that tasted any good was fruit salad, so I stoically made a big bowl of it and we survived on it until the taste buds returned.

Somehow the  time passed in a fever dream, and I’m back to feeling sort of normal.

On the cat scene, I was going to report that Monty one of the cats next door had disappeared, and so he had, being missing for over two weeks. Everyone feared the worst, but miraculously he was found and returned in good health.  Social Media has its uses after all.

Contemplating the past year as a whole, it has been pretty good, with one of the highlights being participating in the Black Caviar cheer squad, and the outstanding low light being the tragic demise of our beautiful Lizzie cat.  Light and shade is what makes life interesting after all.

So this Christmas Eve finds me optimistic for an equally interesting and eventful 2013.

As usual we’ll be travelling to the country to spend Christmas with my brother and his family.  It’s generally a pleasant enough day and I enjoy seeing the nieces and nephews this once a year, but I’m always heartily glad when it’s over.

So Merry Christmas to you all, and best wishes for a peaceful, healthy and pleasantly eventful New Year.

The New Republic of Cats

The cat politics since the arrival of new cats next door has resulted in nothing much at all - so far.

Milly and Monty, the bengal-burmese cross cats, have been exploring their new neighbourhood, which naturally encompasses our back and front yards, so they have encountered Willy once or twice without any great drama.  However, Willy is not at all sure how to handle the situation, spending more time lurking indoors during the last few days than he has ever done before.

He did venture out to the backyard yesterday afternoon and relaxed in a chair on the porch of the studio where I snapped the following photo. 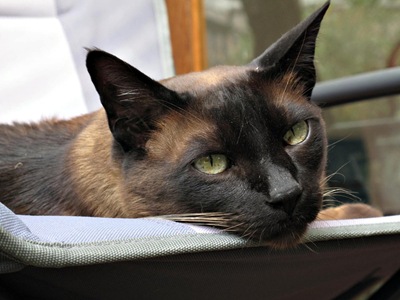 He’s getting on for nine years of age, so has modified his behaviour and activities somewhat.  We took him to the Vet last week to get his eyes checked out, as they have developed brown spots on the cornea (you can see them in the photo above) and we feared that they indicated melanomas.  Not a good patient, he submitted with ill grace to being examined by the Vet, going so far as to scratch and bite,  growling angrily throughout.  Anyway, the Vet reckons the spots are age related and not cancerous, which is a relief. He’s not a vicious cat, but he has little tolerance for being handled by strangers and has a habit of nipping us playfully every so often, following the nip with a lick. Wilful by name, wilful by nature.

The cats next door are very pretty, a soft lilac grey with stripes on their legs, tail and face – rather like the markings on Abyssinian cats. I managed to get a photo of Milly yesterday, so you can see how pretty she and her brother are – they are identical, so you see one you see the other. 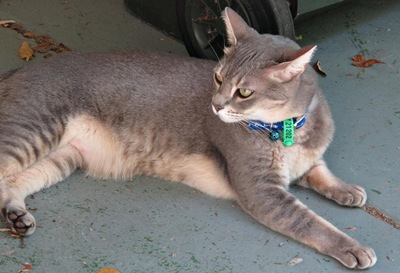 Summer has finally made an appearance in Melbourne, last Thursday being a particularly hot day. This will slow down cat activity, so we are hoping the cat political situation will remain in detente and not erupt into all out war.