I'm suffering badly from Music Festival lag today, but I will endeavour to post about the recent Justin Townes Earle concert at the Forum on Friday night and the Joe Pug show at the Toff In Town last night.

Firstly the JTE concert, where unfortunately I was unable to to obtain photographs owing to a ban on cameras that was rigorously enforced by security persons dispersed throughout the theatre.

This irked me somewhat, but it certainly didn’t spoil my enjoyment of the show.

There were two support acts before Justin took the stage, first Lanie Lane, budding songstress from NSW who is described pretty aptly elsewhere as “evoking the growl of Nina Simone, the softness of Ella Fitzgerald, and the sass of Billie Holiday”.

She was followed by the dynamic Joe Pug. More about him after.

Justin was as usual in very fine form and very funny at times, for instance when talking about his relationship with his dad where he avers that his father describes him as “a hard dog to keep under the porch”. Justin’s quip in answer to this was “at least I don’t marry every woman I fuck”.

JTE played his usual run of songs, Who Killed John Henry, Mama’s Eyes, Midnight at the Movies, Halfway to Jackson etc. He also dedicated his song Christchurch Woman to the victims of the earthquake in that city.

At one point he played a superb blues number which I have not heard before and performed a fabulous version of Bruce Springsteen's Racing In The Streets.

In the encore he called Lanie Lane and Joe Pug back to the stage for a gospeller rendition of Harlem River Blues.

The Forum was pretty well packed for Justin’s show, though not sold out, so it seems to me that the days of seeing JTE perform in small intimate venues is numbered, if not totally a thing of the past.

Joe Pug at the Toff 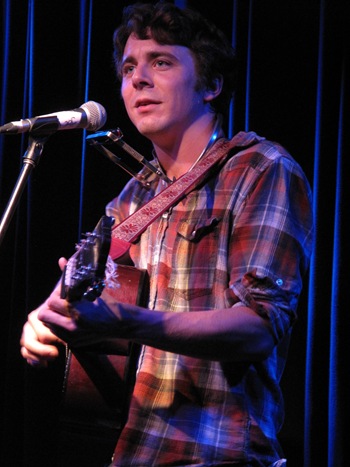 As you can see from the photo above, there was no problem with taking photos at the Toff In Town. I’ve only been to the venue once before, coincidently to the first Justin Townes Earle concert in Melbourne back in December 2008.

That time it was standing only, but last night they had provided tables and chairs to those punters who arrived early enough to claim them. Naturally, in accordance with my usual fierceness in queuing early, my friend and I managed to score a table in front of the stage – essential for snapping good photos.

It was a long wait until the show began at 9.00pm or thereabouts - the doors opened at 7.30pm.

However, all snitches aside once the show started it was magic from start to finish.

Local artist Chris Altmann opened the show with a set drawn from original songs on his very successful country rock CD Que Paso , along with a rather good cover of the Hank Williams classic Your Cheatin’ Heart. 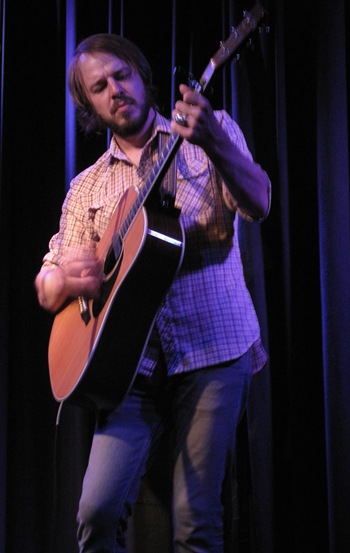 Then there was Joe Pug…

Over the past week or so I’ve had the pleasure of witnessing Joe Pug perform three times. By the time last night came around I almost knew his songs by heart, but that doesn’t mean that I had grown tired of them; the more I heard, the more I wanted.

Joe Pug is a dynamic, passionate performer and you can feel his sincerity and love of music palpably in his stage show.

He reminds me somewhat of the young Dylan, both in his song writing and presentation, though he has a miles better voice than the revered Bob. He writes killer songs, with finely honed lyrics, often very biting and anti establishment. I love good songs myself, and always prefer a good lyric over anything else. I suppose having a literary bent inclines me this way.

Anyway, it was gratifying that last night Joe was the star attraction, as he played a much more comprehensive set than I’d heard previously, but still included the songs I’ve grown fond of over the past few weeks, like Nobody’s Man, Nation of Heat, I Do My Father’s Drugs, Speak Plainly Diana, Bury Me Far (from my uniform) and Dodging the Wind to name a few of the 14 or so songs he performed.

Chris Altmann returned to the stage for the encore for two covers from The Byrds Sweetheart of the Rodeo, I am a Pilgrim and Hickory Wind.

Joe ended the night with a new song possibly called Road of Bones as sussed from the set list I lifted from the stage at the end of the show. Joe very obligingly signed it for me later. He’s a super friendly, personable young man who obviously enjoys connecting with his fans. He’s certainly won me.

I've only one more show to attend this week - Shane Nicholson at East Brunswick Club on Thursday. That'll do me for a while.

You have had a busy few weeks! And another 'stolen' set list: is this something that true fans do? along with waiting for hours to get the front table to get great photos?
Some of us only have these intense experiences one a year at a favorite festival - you seem to make a habit of it!

I basically steal the set list to verify my own notes/setlist, but yes it is something fans do, often very aggressively (I remember almost coming to blows with a guy at a Steve Earle comcert once in a wrestle for the set list)

You wrassled a guy for a setlist?
wow.
My drummer pal Helen was at Port Fairy too and you might enjoy comparing her experience to yours. I thank you both for sharing and wish I had been there.