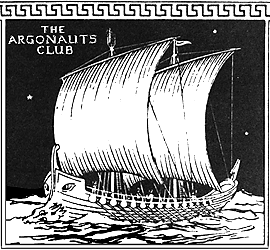 As with the greater number of Peter Thompson’s talking heads, Jeffrey Smart had an interesting early life and has achieved fame in his chosen profession. Now he is regarded as one of Australia’s best artists and I must admit I really like his surreal urban landscape paintings. You can see some them on this site.

One of his claims to fame is that he spoke the first words on Australian Television back in 1956 on The Children’s Hour show.

Now, the Children’s Hour was originally a radio show broadcast across the width & breadth of Australia and it was also known as The Argonauts Club. It was immensely popular and encouraged creative participation from the audience in the form of artistic or written compositions. It ran from 1941 to 1972. I was a member of the club in the 1950s when I was living in the bush, far from any major town. The children’s hour broadcasts became the highlight of our lives. We also were addicted to other radio serials like Superman, Biggles and Hop Harrigan in pre television days.

The Argonauts Club was based on the legend of Jason & the Argonauts and each member of the “crew” was given a ship name (from Greek mythology) and number. My Argonaut name was Erato30. It was an early version of the anonymous user names and avatars of the internet. Later, on television, the aliases were dropped and the child’s real name was read out .There were various hierarchies to aspire to. The more you contributed the more points you scored. The ultimate level was Golden Fleece and Bar. I got nowhere near that, not even to Dragons Tooth level, but I remember what a thrill it was to have one’s own composition read out over the airwaves.

One of my paintings made it onto the television show hosted by Jeffrey Smart who was also an early presenter on the radio version and was called Phidias in the Argonauts Club. I did not witness my painting on screen but was told about it by relatives, who had. If I recall, it was a painting of a fire blasted forest. Long lost, unless it is sitting in an ABC archive somewhere.

The above picture is the logo of the Argonauts Club. I remember, when you first joined up, you were sent a membership certificate with your ship name and a badge. It was a stylish green and silver enamel badge of the ship in the logo above. It went missing long ago, but I do recollect once, when I was working in a bookshop, a customer came in wearing one on his lapel. I recognised it instantly.

Anyway, it was interesting seeing old Phidias on TV the other night – it certainly took me back…
Posted by Anne S at 2:31 pm

Labels: Australian history, the past

That sounds a lot more educational than our radio for kids - altho' I enjoyed our Sunday morning Request Sessions - Little Red Engine, Diana and the Golden Apples ... Oh Yeah ... thanks for the memories Anne!

I really enjoyed this post.
I remember listening to Childrens Hour here in the UK; I think the main attraction was our radio ( or wireless) with lots of crackling stations you could find....Helsinki. Budapest, Copenhagen....MAGIC!

I stumbled across this blog accidentally. I used to belong to The Argonauts. I was Polybus21 and I did gain my Golden Fleece and Bar but it took a long time to achieve this. It was the only club I was allowed to belong to because of the anonymity. I was also on the TV Literature quiz presented by John Gunn every second Sunday night for about a year in about 1957 or 1958 which was a fantastic experience. It was a wonderful Club for the encouragement in art, literature and creativity.

Hey T's, thanks for dropping by and it's great to make contact with another member of the "crew".

I'm sure there's lots of us out there even though we must be all getting quite elderly these days.

Hi Anne.
I was thrilled when I saw your blog. It brought back so many memories. I'd forgotten the names of people like Jeffrey Smart. Unfortunately I live in New Zealand now so didn't see the programme to which you referred.
There were so many members' names whose regular contributions I admired and whose progress I followed. I don't have any of the memorabilia - the bar or the certificates, but I do still have the books amazingly enough.
Thanks for the post and thanks for your reply

David, No I don't recall the intro to "Muddle Headed Wombat", but it is totally delightful as you quote it. Do you remember them performing "The Magic Pudding" on the air - surely in the Argonaut's Club segment? It was hilarious, especially the pudding who was played by John Ewart who played the muddle headed wombat, if I remember it correctly.

Love this post. I am posting on behalf of the Friends of the NFSA. We are developing a register of Argonauts members - ship names and numbers. It appears that there is no complete record of the membership. If you are interested and we'd love you to be, please go to our site: http://www.archivefriends.org.au/index.php/argonauts-registration-form

Hey Athos 26, thanks for dropping by. I have now registered as an Argonaut on the Friends of the NSFA.

I'll write a backup blog about it and hopefully drum up more support for the Argonauts project.

Thanks Erato 30 for registering AND for your reminiscence as well. We'd be very happy of course for you to write another post and drum up support - any time you feel like it. Cheers, Athos 26

This blog is still under the old blogger set up, so subcribing may not be available.

I suppose I should update it to the new blogger, but I must admit I like the blog design as is.

Lived in a small western queensland town called Dulacca. I was in the argonauts in the 50's and never missed a broadcast even if it ment doing my chores later. don't know were my badge went.( I thought it was gold and green?) I sent in compositions etc. Wasn't it called Jimmy and the argonauts? in my 60's now and have fond memories of the show. GAVAN.

Hi Gavan or should I say shipmate.

The badge was a green enamel ship as in the picture on this post.

The club was Jason and the Argonauts. Jimmy was one of the presenters - the commedian of the bunch. In real life he was john Ewart.

I was amazed to hear about this on the ABC radio on the Overnighters last week. Took me a while to find my one and only book prize that confirms me as Polydorus 48!

I just loved and adored this radio program...it gave me such a sense of belonging and community. I had so much fun being an argonaut!

Children of today should wish!

If only- to-day's children could hear it, the Argonauts! I grew up in an industrial suburb & it was non-you to be in the Agonauts but I loved it - my secret, till I found other members at highschool. I was born the year it began 1933. I've always wondered if "Jiimmy" John Ewert the actor was related to Heather Ewart YV ABC journalist. She always had John's curly hair.Daphne

I was a member of the argonauts in Shepparton and then Port Moresby in the 60's,

Doe anyone know if there are any audio clips of the programme available on the web?

Love to hear some audio - surely the ABC kept some tapes!

Check out this link at the National Film & Sound Archive and sign on as an old Argonaut. They appear to have the old theme song there as well.

Ah - a trip down memory lane! Thank you! I have since registered with the Friends...Argonauts' Club.