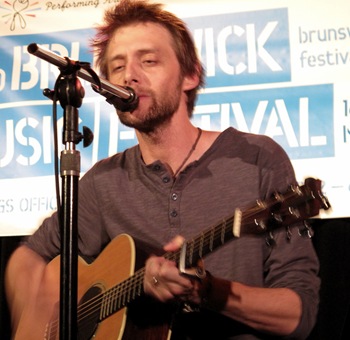 It was a lovely show at the East Brunswick Club on Thursday night where Shane Nicholson was the star attraction. A decent enough crowd showed up, certainly more than when I saw Shane perform there in 2006, when only about ten of us die hard fans made it. Amazing but true that an artist of the calibre of Shane Nicholson could draw that small an audience.

In the main he’s yet to be discovered as an individual artist outside his association with his wife Kasey Chambers. He’s a better songwriter than her and has a really fine voice that is pleasing to the ear. He is also a master of several instruments and is an ace guitarist.

Bad Machines was officially released yesterday, though I acquired a copy at Port Fairy, so have given it a pretty thorough run through the player. It’s Shane in country mode, and he does country twang as splendidly as he does pop and rock.

Anyway back to the show…

Chris Altmann and his Que Paso band opened the show with a raucous set showcasing songs from the Que Paso album with a few covers from Neal Young and others. Chris is moving to Canada in May so this was one of my last chances to see him live, so despite the rather uneven sound mix of his set, I can’t complain too much as he’s one of our best local artists and will be missed .

It was aural relief when Shane Nicholson took the stage. This time he was accompanied by fiddle/mandolin player Luke Mullen (?) and bass guitarist Chris Hale, who was playing with Shane for the first time. Shane in fact did not know his surname initially and got it wrong a second time with profuse apologies ensuing.

Shane relished the chance to be “off the leash” as he puts it, performing solo shows, though he did sing one of Kasey’s songs from Rattlin’ Bones album during a solo sequence that included Once In A While and the beautiful new song The Broken Things, which simultaneously reminds me of Julie Miller’s song Broken Things and Guy Clark’s Stuff That Works, though written from a completely different stand point.

As I’ve remarked before , a Shane Nicholson solo concert is a rare pleasure to witness. I truly hope that Bad Machines brings him the acclaim he rightly deserves as a songwriter, vocalist and composer.

I didn’t get the set list this time, but noted it as follows: