There’s a mouse (or rat) in there - Cooperating cats 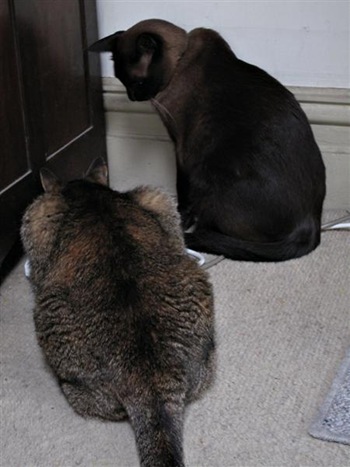 A rare photo of the cats together, in cahoots, looking for an errant rodent which one or other of them dragged in and allowed to escape.

It’s still there. Willy’s gotten bored with the whole exercise and run off, leaving Lizzie to man the fort.

It’s not in the least unusual for rodents to evade capture and run under the furniture out of reach of tooth and claw. Hopefully, it will get bored and attempt to escape and one of the watchful cats will despatch it. We’ll never know unless a corpse is left as evidence, but quite often the evidence is eaten – a bit of roughage in the diet doesn’t go astray.

while feeling sympathy for the poor mouse, whose only crime is being a mouse, I do love the cats just waiting it out.
"we kno yu in ther an we wan you bad"