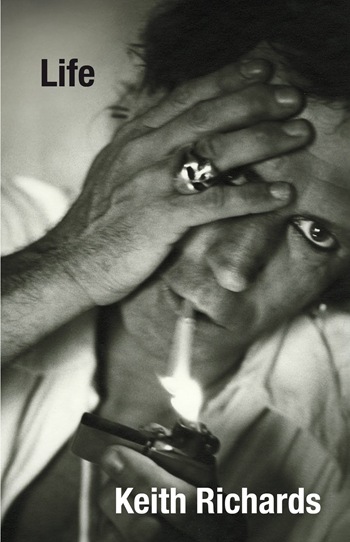 Over the past week or so I’ve been reading Keith Richards autobiography, Life, and what an amazing reading experience it has been.

I am not usually one to read celebrity bios, but I made an exception with this one as I’ve always been a great fan of the Rolling Stones, and even though my main fascination with the band centred on Mick Jagger, after reading Keith’s Life, I have become a Richards devotee. In fact after reading halfway through the book which took it up to 1972, I felt an urge to run out and buy the DVD Ladies & Gentlemen The Rolling Stones – a live recording of a concert they performed in that year. Instead of concentrating on the antics of Jagger I watched Richards this time.

Not a book for the fainthearted or the easily shocked, Life is grand tale of sex and drugs and rock and roll; indeed Keith Richards lived his life like we all imagine rock stars do.

What makes the book extraordinary as an autobiography, is the up front and personal style of the writing. You feel, reading it, that Keith Richards is talking to you directly. No expletives or details are spared, and you emerge from the book feeling you know the guy intimately. Quite an achievement!

The book traces Keith Richards life from his schooldays to the present and it’s a real page turner, engagingly vivid and interesting throughout. It describes the development of the Rolling Stones as one of the great rock ‘n roll bands, and for all you guitar aficionados, Keith explains his technique in great detail.

Keith Richards Life has gained many accolades in the press, the book being designated as "One of the greatest rock memoirs ever....” and I can only agree. Highly recommended!

the excesses were well-covered in the books by Bockris and by Hotchner, but Keef's own books highlight for me was the sweet letters he wrote to his aunt when he was 19, and how brave he is to include their gaucheness now.

also the end-papers of the book are just wonderful - it's every record we had at home at the same time.

Now I'm reading Mt Booky Wook and that is just as druggy.
wishing you peace and love

I haven't read any of the other books you mention about Keef, as I am not generally a reader of celeb bios. A friend however gave me a biography of Leonard Cohen for Chrissy, which I'll get round to reading soon.

I'm now reading a book called How to Live Safely in a Science Fiction World, not druggy at all, though quite weird all the same.

As I've already said in a response to you on my blog, I've heard great things on this book (from my friend who writes the Canberra Jazz Blog: http://canberrajazz.blogspot.com/ (Have you seen his blog??) The way Eric describes it there seems to be more to Richards than one would have assumed from the surface.