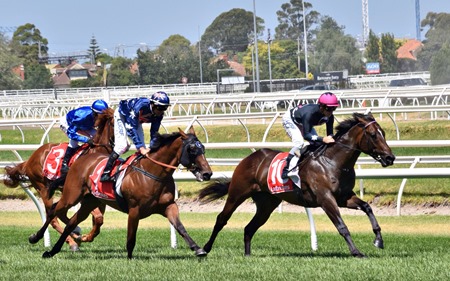 I Am Immortal – Blue Diamond Preview

This Saturday the weather is forecast to be in the mid 20s and sunny, a perfect for a day at the races.

So who will win the Blue Diamond Stakes?

Having watched all the build up races, several stand out as likely chances; colt I Am Immortal, and fillies Catch Me, Brooklyn Hustle, Lyre and Loving Gaby who was the early race favourite. It being a race for two year olds anything could happen, so one of the other four colts or five fillies could steal the show.

The first of the Group 1 races scheduled to run is the Futurity Stakes, a race over 1400 metres, comprising the usual suspects such as Hartnell, Redkirk Warrior, Land of Plenty, Le Romain and Brave Smash. Early favourite is Sydney mare Alizee who started her Autumn with an impressive win in the Group 2 Expressway Stakes. She is also favourite for the All Star Mile, the new race on the block that will be run on the 16th March at Flemington.

Speedster Nature Strip takes on a huge field in the Group 1 Oakleigh Plate that include such talented sprinters as Viddora, Eduardo and Booker.  Nature Strip looks the logical pick and should win if he has recovered from his dazzling win in the Rubiton Stakes a fortnight ago.

I intend to get to the track around 1.30 pm. Fortunately trains will be running as normal.