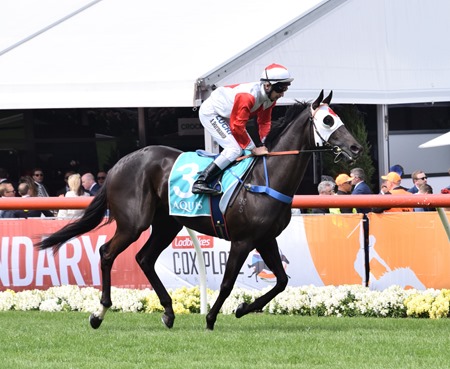 It was hard to decide which racehorse photo I would use to illustrate this post, but I settled on one of Mystic Journey as she is the most intriguing runner in the Australian Guineas field.

In the past few years (from 2015) the Randwick Guineas has been run on the same day as the Australian Guineas, so fields for each race have been diluted with several top three year olds running in one or the other of them.

This year the scheduling of the two Guineas races has reverted to the old format and the Australian Guineas can shine once more as a quality Group 1 race. It has attracted a quite wonderful field of contestants that include Extra Brut (Victoria Derby winner), Amphitrite (Thousand Guineas winner)  and other recent impressive runners such as Hawkshot, The Inevitable, Mystic Journey, Verry Elleegant and Ringerdingding.

Mystic Journey was the early favourite for this race and I can understand why. With two very good wins under her belt already this season, she has marked herself as quite an exceptional filly. If she does win the Australian Guineas she will be regarded as a potential superstar of the turf.  It’s her greatest test to date and I’ll be quietly hoping that she passes with honours.

In Sydney Winx will be racing against five of her stablemates and trusty old Happy Clapper in the Group 1 Chipping Norton Stakes.  It looks a shoe in for the mighty mare, and if she wins, she will achieve another milestone by winning 23 Group 1 races -  a world record.

The other Group 1 race on Saturday is the Surround Stakes, also at Randwick. For three year old fillies run over 1400 metres, it has a classy field that includes well performed fillies such as Oohood, Fiesta, Fundamentalist, Miss Fabulass and Nakeeta Jane to name some of the main chances.

After this weekend  there are only two more Saturdays of racing in the Melbourne autumn racing carnival – super Saturday on 9th March and the new fangled, and quite bizarre, All Star Mile on the 16th March.