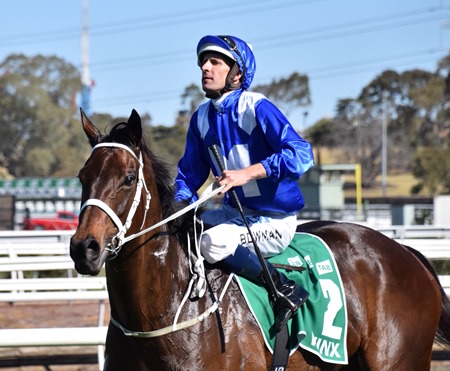 Winx returns to scale after winning the Turnbull Stakes

On Saturday blue was the predominant colour – blue skies matching Winx blue colours all over the expanses of Flemington. And Winx, of course, didn’t disappoint her many fans (who were out in force), winning her 28th successive race, not exactly with ease, but convincingly enough.

I reached Flemington at around 1.00pm and headed directly to the stalls area to see if the star attraction had arrived.

According to the racebook she was accommodated in stall 66 and the large crowd of her fans surrounding the stall made it easy to find. She looked cool and queenly as she surveyed her subjects. 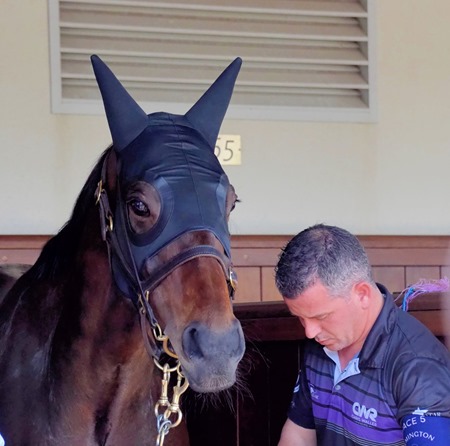 Winx in her stall

Also out and about was the other star attraction Chautauqua, present for his special farewell ceremony. 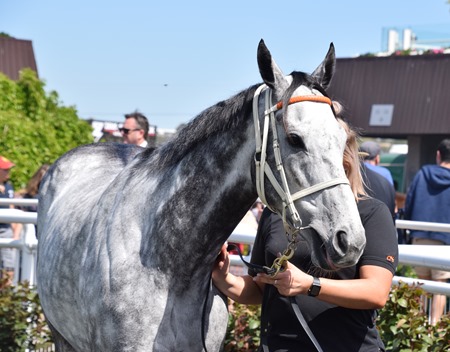 Chautauqua in the walking ring

Returning trackside I came across a pair of Winx super fans who had dressed for the occasion and obligingly posed for the following photo. 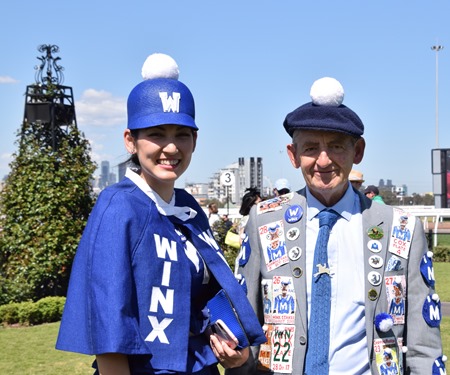 The runners for Race 3, the Paris Lane Stakes, were parading in the mounting yard led out by non other than Paris Lane himself, who along with birthday boy Might and Power, was a Living Legends special guest for the day. 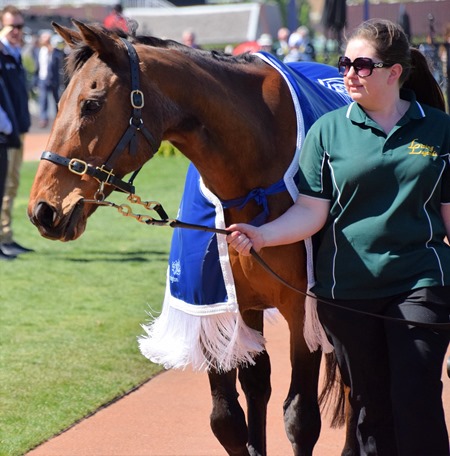 Paris Lane in the mounting yard

Unfortunately the inner rail was out by 9 metres on Saturday, which made it difficult to get rail free shots. Flemington, like Caulfield, have raised the outer fence level – a sore trial for amateur photographers in what used to be an excellent spot to capture racing action. You need to stand on a chair to circumvent the high rail, but alas chairs were hard to come by on Saturday. 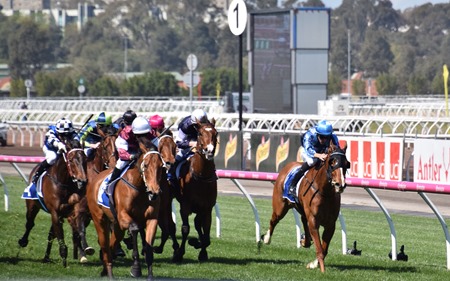 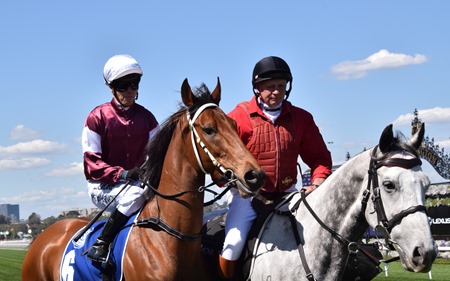 Eckstein on her way to the barriers

Truth to tell I did not pay much heed to the early races on the program as the feature races were scheduled later in the day, with the eagerly awaited Turnbull Stakes set to run at 3.00pm as Race 5.

Therefore after the Paris Lane Stakes there was one more race to watch before the big event.

Before that occurred, the grey flash Chautauqua paraded in the mounting yard, as his illustrious racing career was recapped on the big screen and he was farewelled in style to cheers from the crowd. 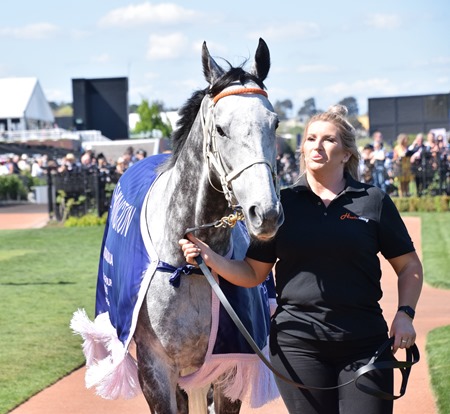 Chautauqua parading in the mounting yard

Race 4 was the UCI Stakes run over 1800 metres. Extra Brut proved the outstanding winner, prevailing over Sikorsky by over a length. The favourite Savoie finished third.

The excitement was building as the time ticked down to the start of the Turnbull Stakes, and I was hoping as ever to get some good photos of Winx, and took a great many as she made her way to the barriers. 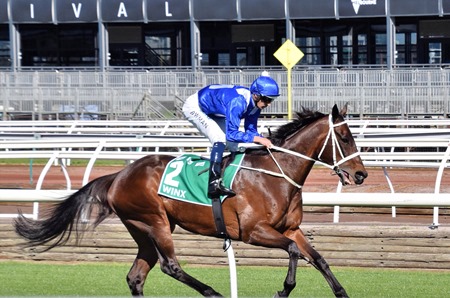 Winx on her way to the starting gates

The race itself has been written of substantially and was as usual fascinating to watch. I’m sure I’m not the only person to think that Hugh Bowman had stuffed up, when Winx was trapped on the inside and needed a gap to break through, as the race leaders Trap For Fools and Divine Unicorn appeared to be getting further ahead.  The gap came and Winx caught up, unleashing her extraordinary acceleration in the closing stages to win by a length from her stablemate Youngstar with Kings Will Dream running third. 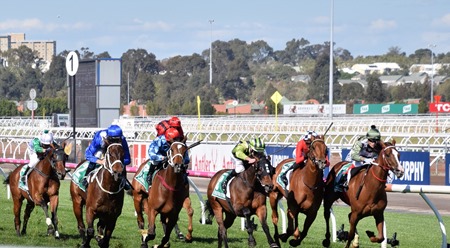 Turnbull Stakes approaching the finish line – Winx about to accelerate 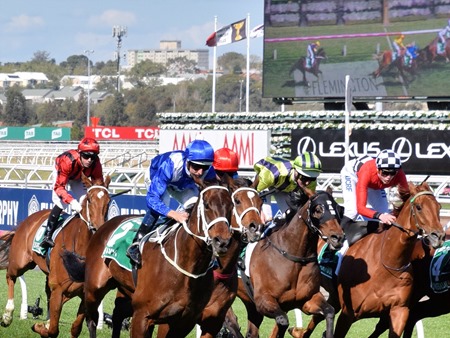 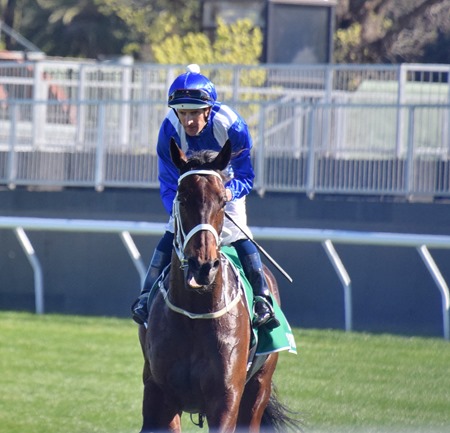 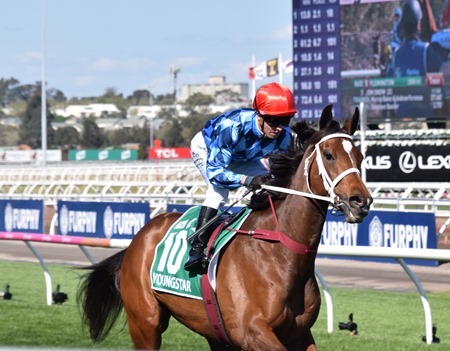 Youngstar on her way to the barriers 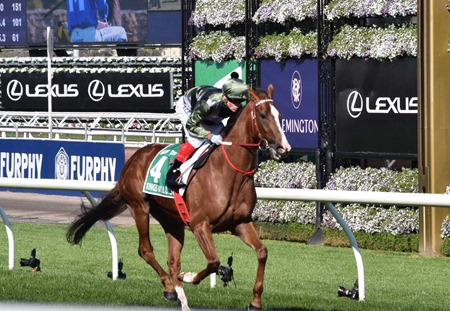 Kings Will Dream on his way to the barriers

After the Turnbull Stakes I decided to see if my strategy of last year would work again, when hoping to get Chris Waller’s signature in my racebook I waylaid him as he returned from the presentation to the stalls area. Alas, that didn’t happen this year. Never mind there will opportunities aplenty at Caulfield next Saturday.

Winx wasn’t in her stall, having left the course shortly after the race, though a large crowd of fans still hung around hoping for a glimpse.

Having missed race six with all this loitering around, we returned to our spot on the fence for The Bart Cummings.

It was apt that a horse now trained by James Cummings won the race named for his famous grandfather. Avilius, a handsome beast, started as the favourite and won narrowly from Jaameh with whom he fought out the finish down the straight. Yogi finished third a length behind the leading pair. 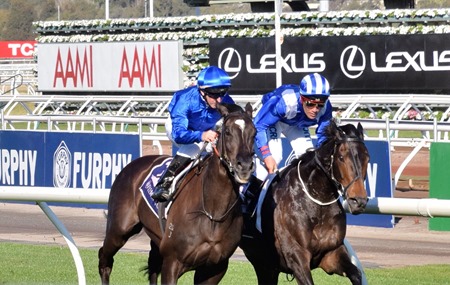 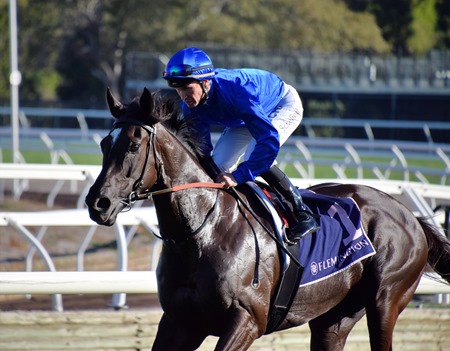 With The Bart Cummings run and won I headed to the station and home.

It had been a splendid afternoon weather wise, and stirring to see Winx win her 28th consecutive race and 21st at Group 1 level.

Her next race is the Cox Plate in three weeks time, where we all hope she wins the race for a fourth time, a feat never before achieved in Cox Plate history.

In the meantime, there is a great line up of races next Saturday at Caulfield with four Group 1 contests and a constellation of equine stars participating in them.