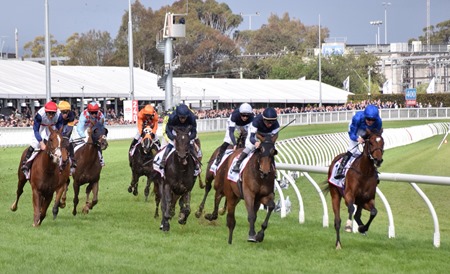 The Caulfield Cup has gone the same way as the Melbourne Cup, with the bulk of the field made up of International horses, and very few locals even getting a run.

Such was the case last Saturday where the field of 18 starters was comprised of six Internationals having their first start in Australia,  seven acclimatised Imported stayers and five Australian & New Zealand bred contenders.

Last year local breds took out the quinella (first & second) and only one International ran a place.

Not so this year, as Internationals Best Solution and Thecliffsofmoher filled first and third places, with the imported Homesman splitting them. The local hopes ended way back, Youngstar finishing the best in 7th place.

As there were no must see rare white fillies racing last week, so I took my time getting to Caulfield, arriving in plenty of time for the fourth race, the Alinghi Stakes, a sprint for fillies and mares over 1100 metres.

From Within took the lead shortly after the start and held on, despite being challenged by Working From Home, to beat her by over a length, with Soothing running third close behind. 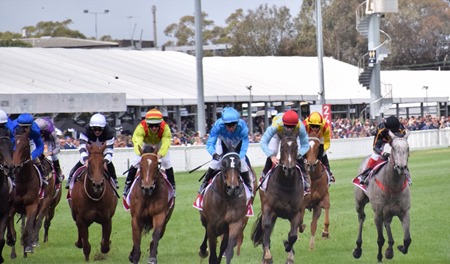 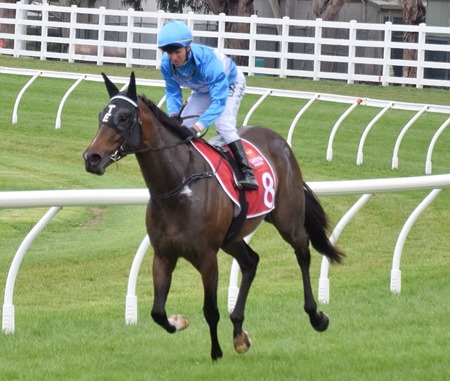 From Within returns to scale 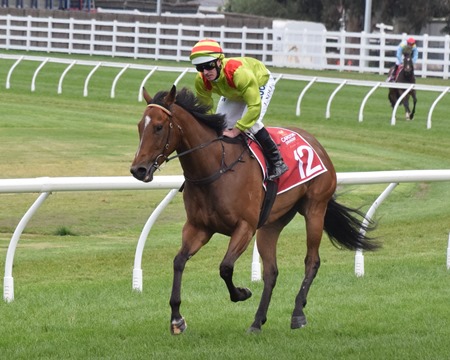 Working From Home returns to scale 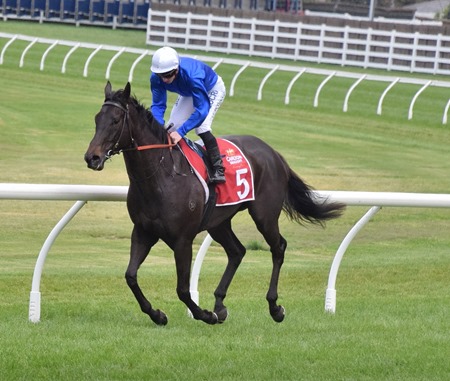 The weather on Saturday was in stark contrast to the Guineas meeting, Melbourne waking to heavy rain, which cleared around midday.  The Caulfield track was rated a Soft 6 and the rail was out 6 metres. It rained on and off throughout the afternoon, sending the party crowds scuttling for cover. I’m glad I had dressed for the weather, unlike many young things who must have been cold in their flimsy finery.

Oaks bound fillies contested Race 5, the Group 3 Ethereal Stakes, which is run over 2000 metres, and hot favourite Verry Elleegant didn’t disappoint her fans, winning by half a length from Aristia with Sizzleme running third. Verry Elleegant is now warm favourite for the Crown Oaks. 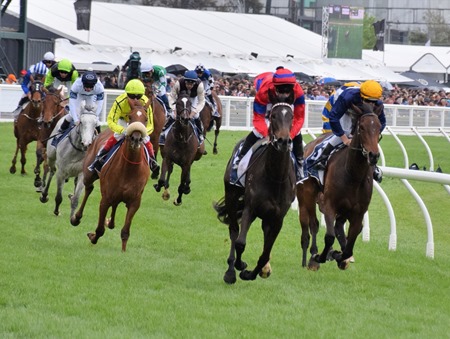 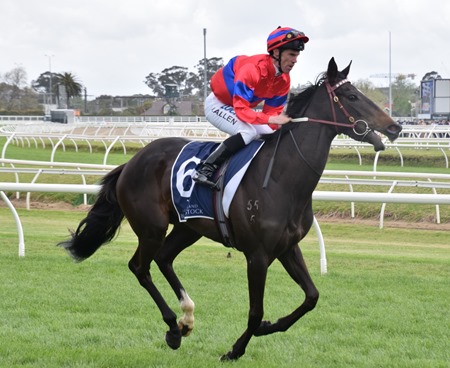 Verry Elleegant on her way to the barriers 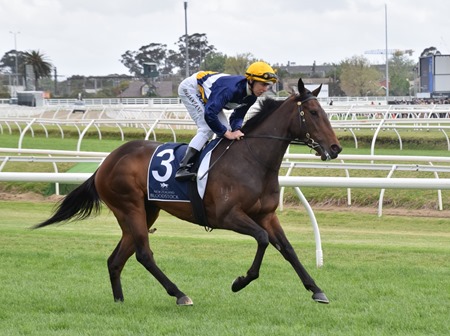 Aristia on her way to the barriers 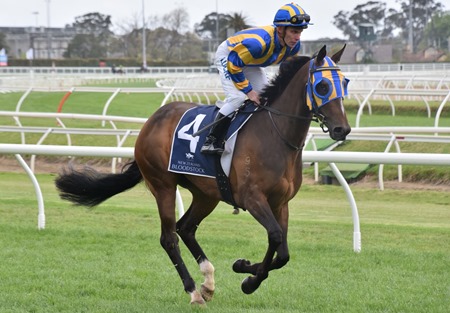 Sizzleme on her way to the barriers

The colts and geldings version of the Ethereal Stakes, the Group 3 Caulfield Classic was won impressively by the Gai Waterhouse trained Thinkin’ Big, leading from start to finish to defeat Chapada by three lengths with Sikorsky a further two and half lengths behind in third place. 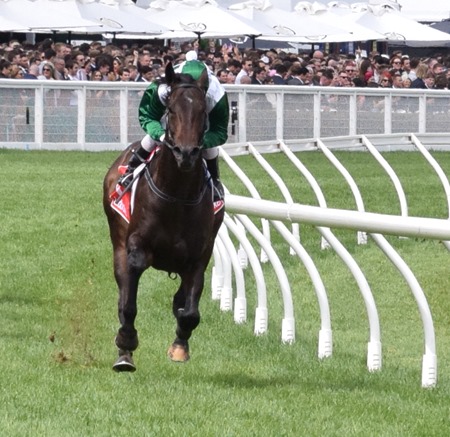 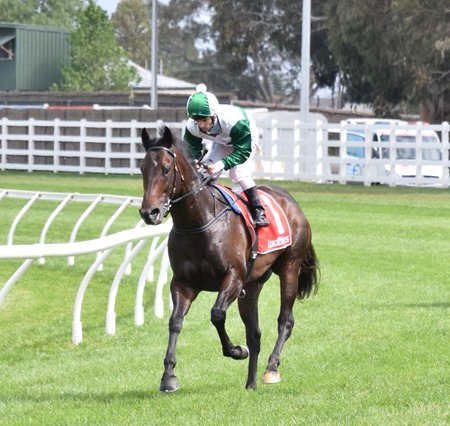 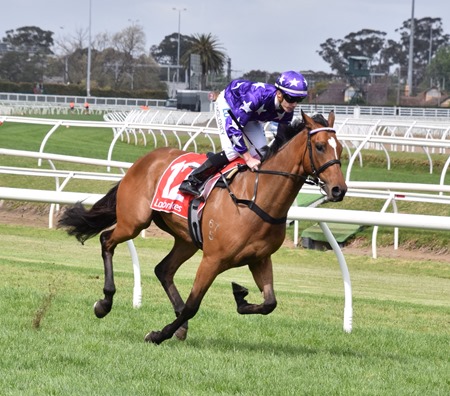 Chapada on his way to the barriers

A rare dead heat was the result of Race 7, the Group 3  Coongy Cup, when Mask of Time and Best of Days fought out a thriller down the straight to the finish and hit the line together.  Life Less Ordinary finished third a length and a half behind. 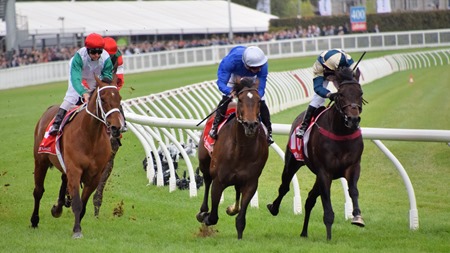 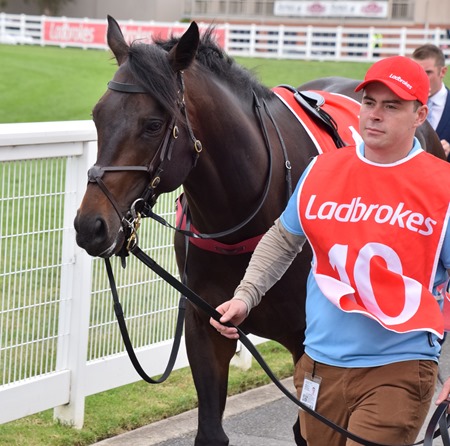 Mask of Time heading to the mounting yard 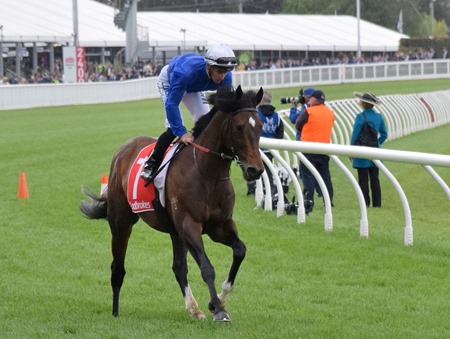 Best of Days on his way to the barriers

The weather had deteriorated and it started to rain again after Race 7, and looked as if it would set in for the Caulfield Cup which was the next race on the program. Luckily it cleared, so I was able to grab my favourite spot well before the race was run and managed to get photos of the runners as they headed from the pre-parade ring to the mounting yard.

Here are some of the main contenders… 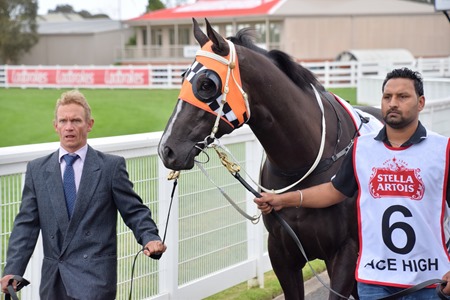 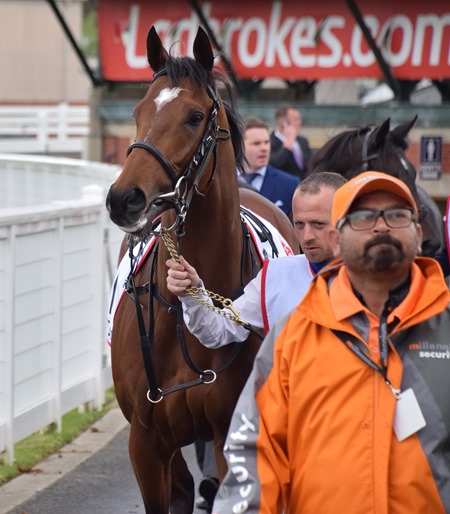 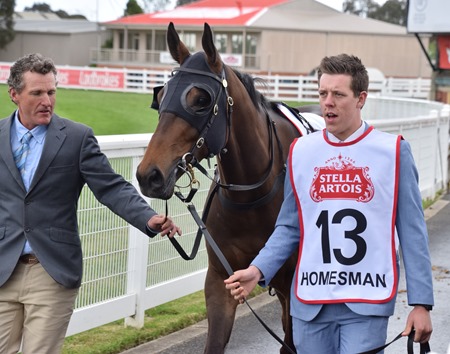 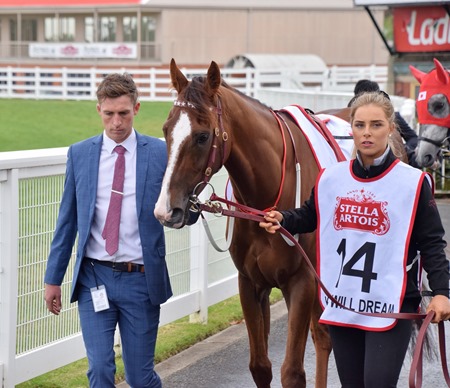 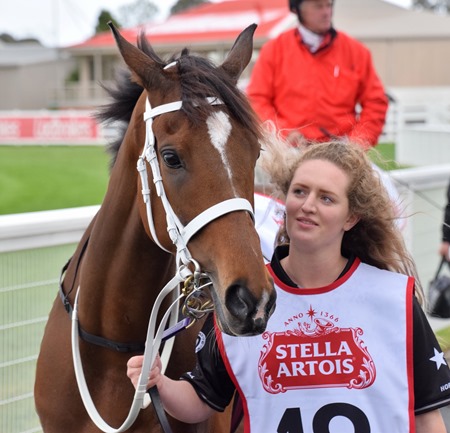 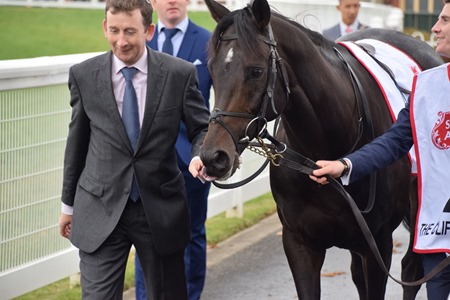 The usual pomp and ceremony preceded the race with the National Athem being sung by some young person I didn’t recognise, followed by a parade of colours down the straight to the mounting yard. 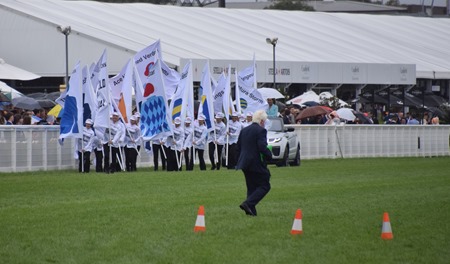 Rugby star Billy Slater got to deliver the Cup… 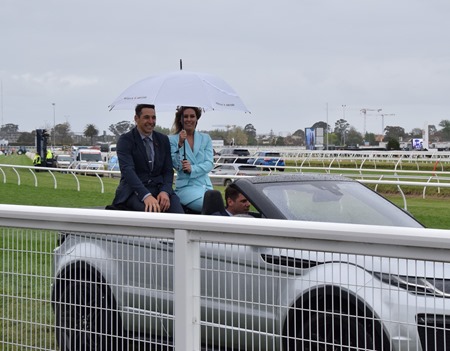 …and then the horses were filing onto the track and heading for the starting gates half way up the straight. 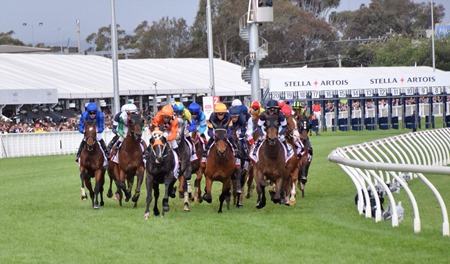 Just after the start to the first corner Again it was a hard fought race, this time between Best Solution and Homesman down the straight, with Best Solution prevailing by a whisker, with Thecliffsofmoher finishing almost two lengths behind the leading pair. 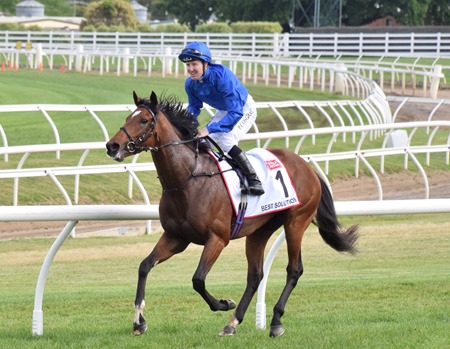 Thankfully it had not been a long day at the track, but it had grown chilly by the time the Caulfield Cup had run, so I headed for home, and didn’t stay for the final two races.

I’m keenly antipating, yet also dreading, attending the Cox Plate next Saturday.  It’s a sell out again, so Moonee Valley will be jam packed with Winx fans. I intend to get there early in order to snaffle a spot on the fence, as good if not better than we, my friend Rebecca and I,  managed to secure last year.