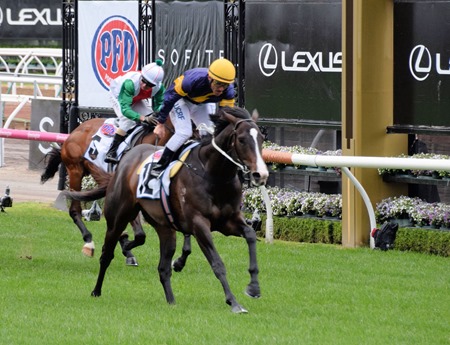 It’s probably fortunate that over this first winter in Ivanhoe I have learned to endure the cold.  Being of a stoical nature, this stood me in good stead on Saturday at the Flemington races, where truly awful weather was the bane of the afternoon. It was cold. It was windy. It rained.

As racing  continues as scheduled, mostly regardless of the weather, you basically have to endure the capricious Spring conditions if you want to witness first class racing.

The O’Reilly boys of the title of this post are Grunt and Brutal, both sired by the New Zealand stallion  O’Reilly by different dams and trained by Mick Price (Grunt) and  the Hawkes (Brutal). Curiously enough both won their respective races on Saturday, and it’s interesting that both have really macho names. They are both very striking young fellows also.

I reached Flemington at around 1.40 pm, in time to witness the running of Race 3, the Listed The Sofitel (registered as the Tontonan Stakes) a race over 1400 metres. 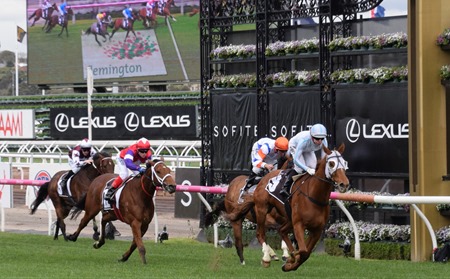 Brutal’s race, the Antler Luggage Plate was next to jump, but before that I cruised through the Stalls area, snapping a photo of the Makybe Diva statue on my way there. 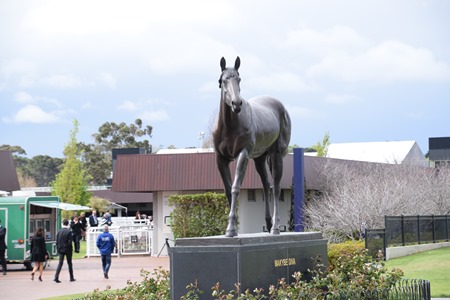 Living Legends Paris Lane and Brew were the special guests for the meeting. 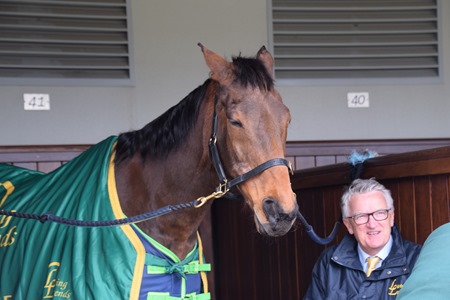 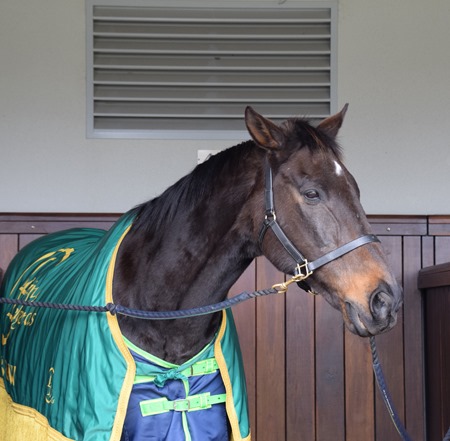 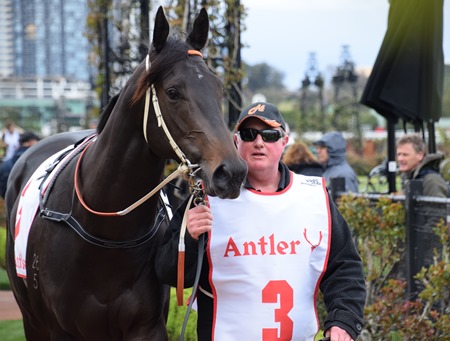 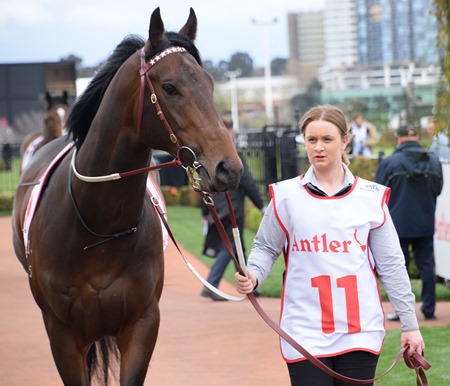 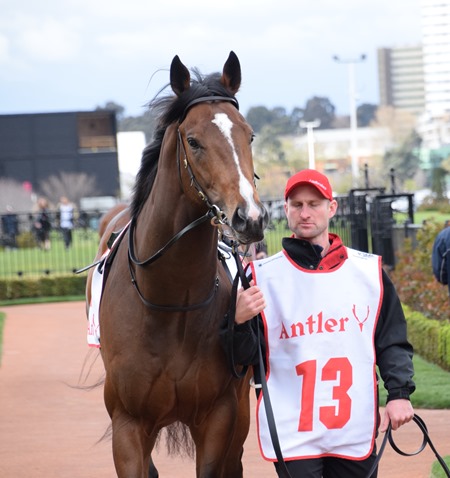 The race itself was exciting with Brutal leading from the start to the finish with Leonardo Da Hinchi challenging him most of the way. The lead changed several times as the two colts fought out the finish with Brutal toughening it out to win by a nose. Good N Fast ran third a length behind the leading pair. 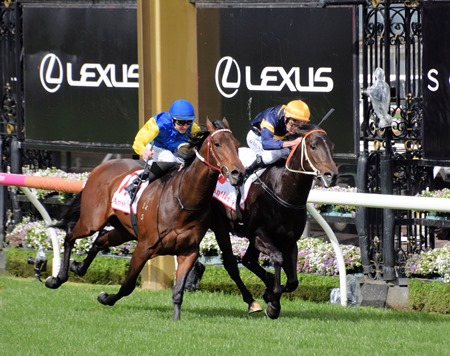 Brutal (inside) & Leonardo Da Hinchi cross the line together 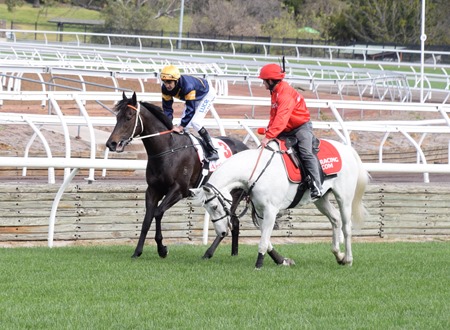 Needless to say, taking photos was challenging with the wind and the rain. Early in the afternoon the sun occasionally popped out from the clouds, but as the afternoon advanced the light worsened.

Race 5 was the Group 2 Bobbie Lewis Quality, a sprint over 1200 metres. Thankfully the field didn’t split, but raced down the centre of the straight. The Sydney based Dothraki, now 8 years old, was the eventual winner, with First Among Equals, missing out by nose, running second with former Japanese sprinter Kemono filling third place. The photo below of the finish is deceptive due the angle of shot (diagonal pov). 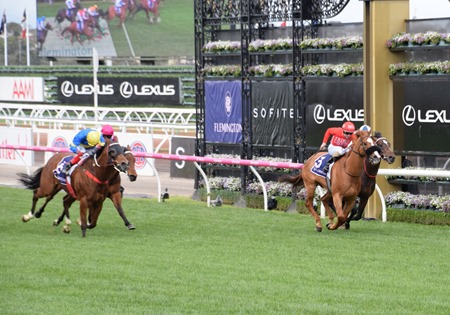 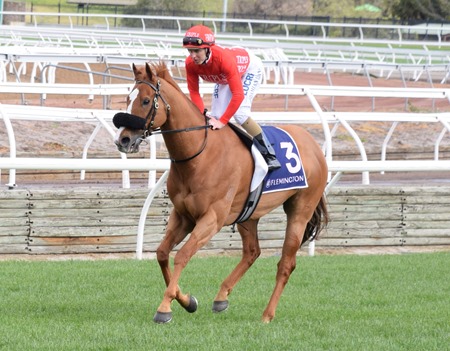 As Winx’s race in Sydney was scheduled to start at 3.10pm I found a place to sit down across from the big screen to watch it. 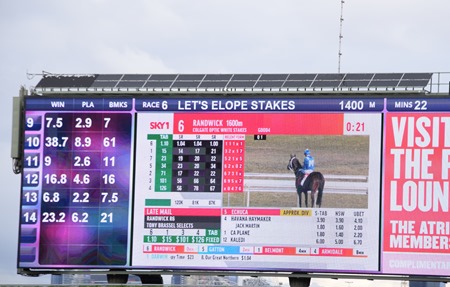 Naturally Winx won easily, as usual giving the field a head start by racing at the tail  before rounding them up and drawing level with the game Le Romain who had taken the lead shortly after the turn into the straight. Winx passed him in a flash and she went on to win by five lengths. That was her 27th consecutive win, 20th Group 1 win and third consecutive George Main Stakes victory.  She is simply amazing!

It started to rain as the mares were parading in the mounting yard preparatory to running in the Group 2 Let’s Elope Stakes, hence the less than perfect photos hereafter. 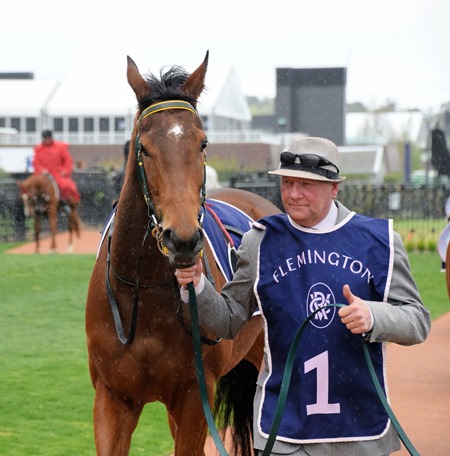 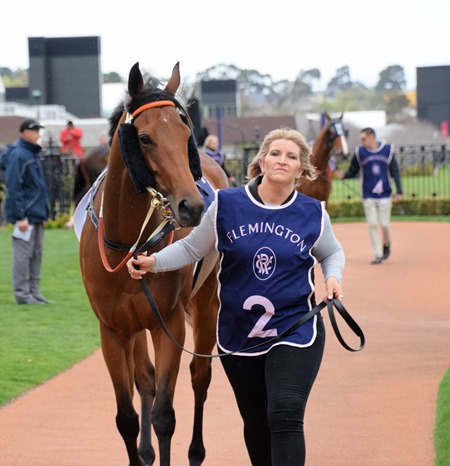 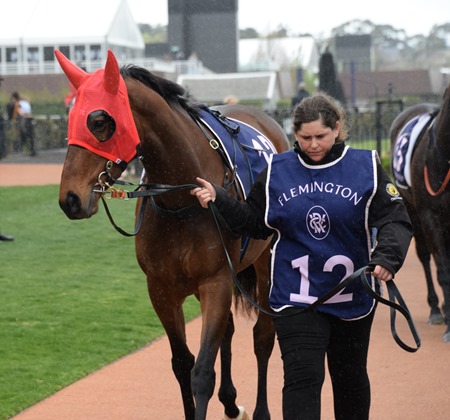 Once again it was a closely fought finish up the straight, this time between I am A Star and Bella Martini where I Am A Star won by the narrowest of margins. Sheezdashing finished third. The rain was was pelting down as the race was run, the mares, like all the previous runners, facing a stiff breeze in the straight. 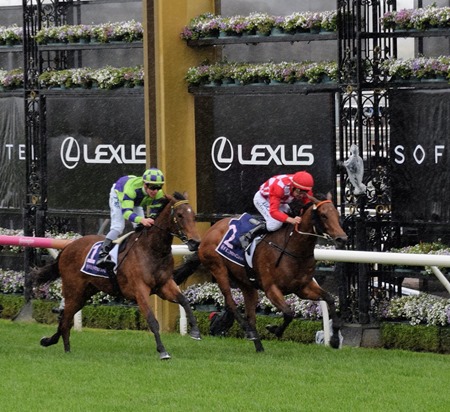 Bella Martini & I Am A Star cross the finish line together

Typical of Flemington racing, very few favourites won on the day, most of the winners paying double figure odds.

And such was the case with the feature Makybe Diva Stakes. I must admit I had lost faith in Grunt after his previous two disappointing runs this season at Caulfield. He obviously likes Flemington as he absolutely flew in the closing stages of the Makybe Diva Stakes, emerging from mid field to overtake the leaders and win by two lengths from Kings Will Dream and Jon Snow. 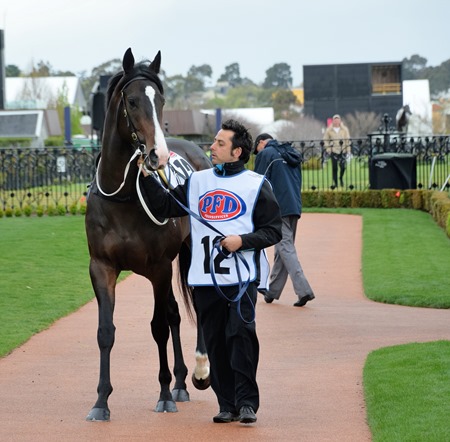 Grunt in the mounting yard 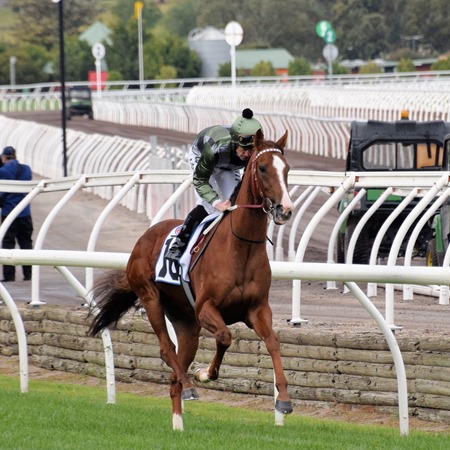 Kings Will Dream on his way to the barriers 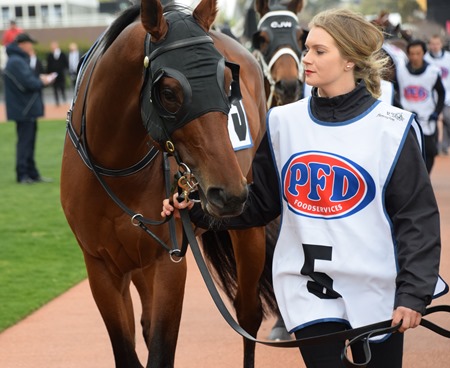 Jon Snow in the mounting yard

I did not stay for the Danehill Stakes even though it had a super field of aspirant Guineas contenders. The blue blood Encryption (Lonhro / Guelph) won it at big odds from Thorondor and Tavisan.

Next weekend the Group 1 action is at Caulfield for the Sir Rupert Clark Stakes, and in Sydney at Rosehill, the Group 1 Golden Rose is the feature race.

Winx’s next appearance to all intents and purposes will be at Flemington in the Group 1 Turnbull Stakes on 6 October. Can’t wait!