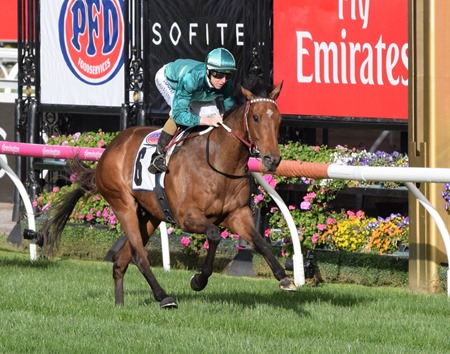 Group 1 racing returns to Flemington this Saturday with the running of the Group 1 Makybe Diva Stakes, and at Randwick in Sydney, superstar Winx continues her progress towards the Cox Plate in the Group 1 George Main Stakes the day after her 7th birthday.

So there’s lots of action as the Spring racing carnival gathers pace.

Much as I’d like to be in Sydney to watch Winx race, I’ll be attending the Flemington meeting. It is very likely that Winx will contest the Turnbull Stakes at Flemington in early October, so I’ll be content to wait until then to see her in the flesh in what may be her last racing season.

It all depends on the train timetable at which time I will reach Flemington, but I hope to be there in plenty of time to watch Race 4, the Listed Antler Luggage Plate where the handsome Brutal will be aiming to keep his so far unbeaten run intact.  His main opponents are The August, Good ‘n’ Fast, Crockett and Declarationofheart.

Besides the Makybe Diva Stakes, there’s a solid support card with three Group 2 races, the first to run being the Bobby Lewis Quality, a sprint over 1200 metres. Hey Doc, who disappointed at Moonee Valley at his last start will probably start as favourite.  The rest of the field is not much chop, the best being Rich Charm, Grand Rosso and Crack Me Up.

The Let’s Elope Stakes has attracted a nice field of well performed mares that include I Am A Star, La Bella Diosa, Miss Gunpowder, Merriest, Bella Martini and Kenedna returning after a long break.

As the Makybe Diva Stakes has not been consecutively won by the same horse since the 1950s, can last year’s winner Humidor achieve this rare double?  He surprised at big odds winning the Memsie Stakes at his second start for spring 2018.  Half of the 12 strong field that contested the Memsie Stakes have accepted for the Makybe Diva.  Added to the usual suspects – Happy Clapper, Humidor, Kementari et al  are the in form Comin’ Through, New Zealander Jon Snow and  Western Australian Pounamu.  Other than the aforementioned the romantically named Kings Wiil Dream looks top pick having won over the distance at Flemington previously.

Run after the Makybe Diva Stakes, the third of the Group 2 races is the Danehill Stakes for three year olds run over 1200 metres. Top chances are Native Soldier, Tavisan and Ef Troop. I probably won’t witness it first hand as I plan to leave Flemington after the feature race.

The must see race of the day is of course the George Main Stakes where Winx will be facing seven rivals, four of them her stablemates Who Shot Thebarman, Religify, Egg Tart and Unforgotten. Unforgotten won the Chelmsford Stakes at her last start, a race won by Winx the previous year. Though not likely to beat the invincible Winx, she is very likely to run second. 2017 Victorian Derby winner Ace High and three time Group 1 winner Le Romain are also not without place claims.

There are also some quality Group 2 races at Randwick, The Shorts for instance, a sprint over 1100 metres that pits three The Everest stakeholders against each other, namely Redzel, Brave Smash and Invincible Star. It looks a doozy of a race.

Though it is warm and sunny in Melbourne today, the weather is forecast to be cold and wet tomorrow. Hopefully it will not be as bad as predicted.  It seems that each weekend of this spring racing season the weather alternates between one extreme and the other – sunny and soggy.