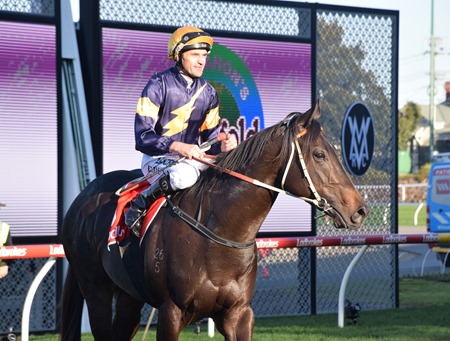 Brutal returns to scale after winning the McKenzie Stakes

One of the star attractions for me at Moonee Valley last Saturday was to see the hyped colt Brutal run the second race of his career. He had won his first start at Caulfield back in July by 5 lengths, so there was a great deal of interest in seeing how he’d fare in his second, and whether he would live up to expectations.

Though he didn’t win the Listed McKenzie Stakes by as great a margin, it was a tougher competition and he prevailed, overtaking race leader Tavisan for a gritty hard fought win.

He’s a very pretty young fellow, quite an eye catcher in fact. I noticed him in the parade ring early in the afternoon and he had a distinct air, that stood him out from other horses circumambulating at the same time.

The McKenzie Stakes was run as Race 7 in late afternoon, but I reached Moonee Valley around 1.45pm, and just caught the end of Race 3, the MSC Signs Plate, which Michelle Payne won on Sweet Rockette, a filly she also trains, upstaging the race favourite Multaja. Quite an achievement!

Getting to Moonee Valley from Ivanhoe is pretty easy with a number of public transport options. I chose this time to catch the 510 Ivanhoe to Essendon bus, which links to a connecting tram near Pascoe Vale Road. This I caught  to Moonee Ponds Junction, the whole journey taking about 45 minutes all up. 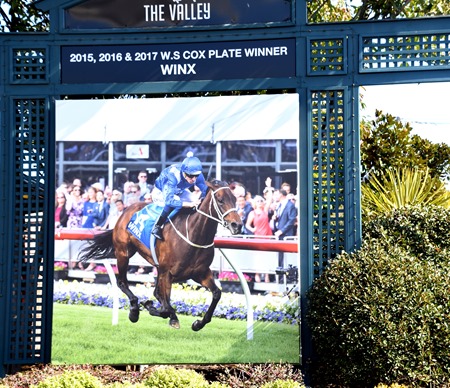 I didn’t manage to get any photos of Race 3, so sauntered around the stalls area to kill time until the next race. I was hoping to get photos of Brutal and Hey Doc, but neither were in their stalls at that time.

Returning later I snapped this photo of Brutal in his stall 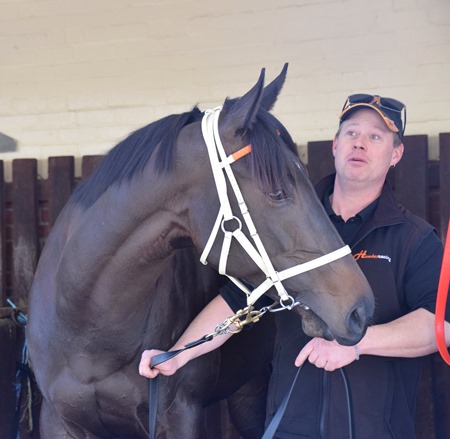 Brutal in his stall

A woman standing by asked the strapper if Brutal was a biter. The strapper admitted he was a biter, but having a large over bite didn’t cause too much damage.

Back trackside on the public lawn I watched Race 4, the Woodside Park Handicap, run  over 2500 metres.  Starting favourite Tiffany’s Lass led from start to finish and won by 1¼ lengths from Fontein Lad, with French import Zilbiyr running third. 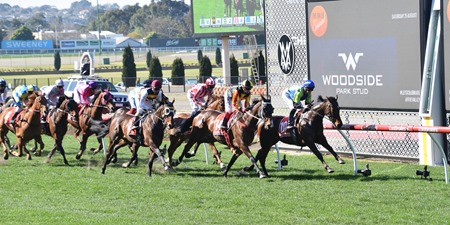 Tiffany’s Lass leads down the straight to the finish line 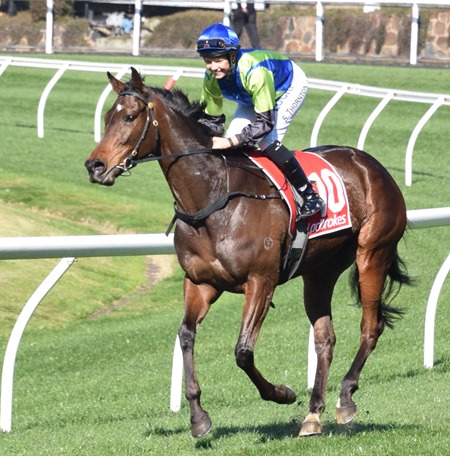 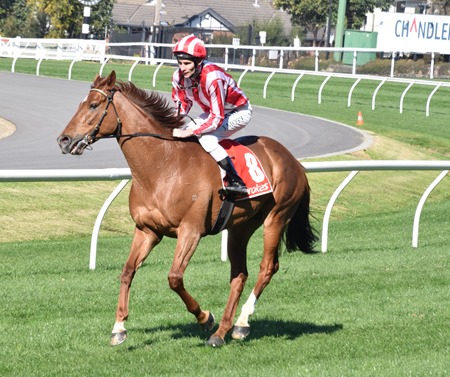 As you can see from the above photos the afternoon was sunny for a change and good for taking photos. Though it remained sunny out the back in the stalls area, as the afternoon progressed the shadow of the grandstand gradually overlay the the track.

Race 5 was the Dr Sheahan Plate, a race for mares over 1200 metres.  The Chris Waller trained Our Malambo won, with Mamzelle Tess running second and Chiavari third.

Our Malambo has a good lead down the straight

By the time Race 6 was run the shadows had lengthened over the track, which made photography somewhat tricky, so these photos of the finish are somewhat dark.

Trap For Fools, another who led from start to finish on the pace favoured track, won the I Print Handicap (race 6) from Our Venus Beach and Sikanderabad. 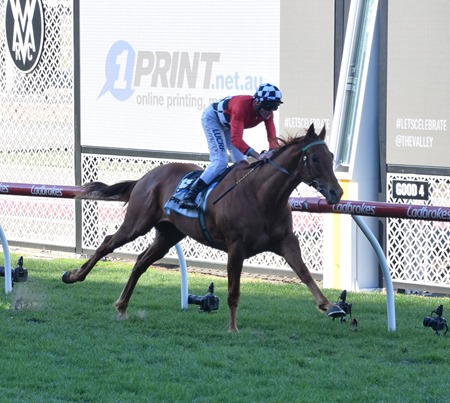 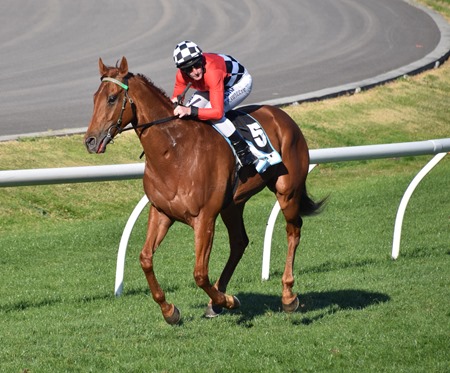 Trap For Fools returns to scale

Moonee Valley recently installed a new finishing post, doing away with the old display that required a couple of blokes to change the sponser names after each race… 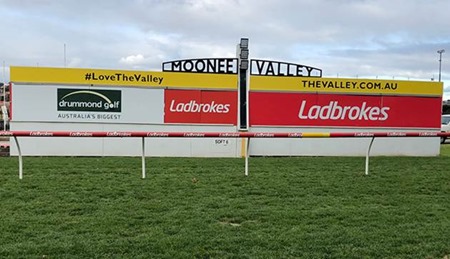 …to a new snazzy digital display. 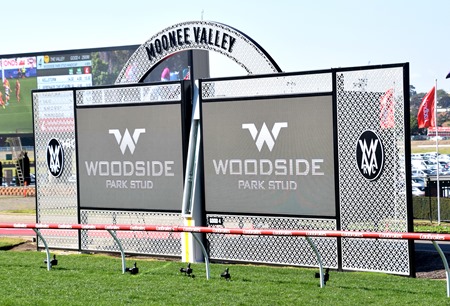 Throughout the afternoon I’d mostly watched the races from the east side of the course, but by the time the feature Mckenzie Stakes was run, the track was shadowed up to and beyond the finishing post, so I moved back to the public lawn for the remainder of the afternoon. 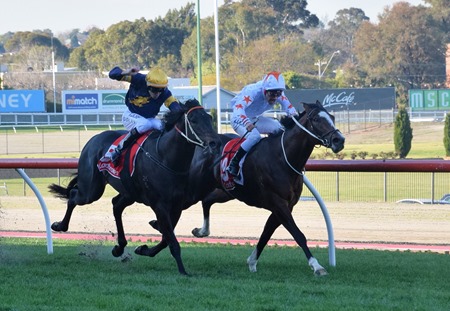 I stayed for Race 8, the Carlyon Stakes a sprint over 1100 metres. Dual Group 1 winner Hey Doc was the favourite, but he only managed to finish 5th. The race was run at a blistering pace, close to the track record, and the globetrotting Faatinah won the bickies from race leader Sunday Escape with Mr Sneaky running third. 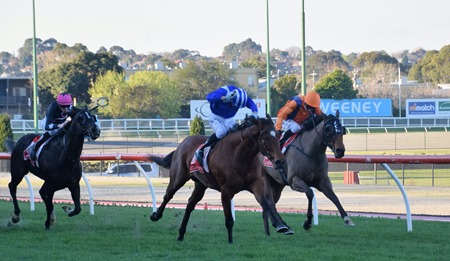 Up the straight, Faatinah (blue silks) is about to overtake Sunday Escape with Mr Sneaky trailing behind

I called it quits after the Carlyon Stakes and headed for the bus terminal at Moonee Ponds Junction, just managing to catch the 504 Moonee Ponds to Clifton Hill bus.

It was pleasant being back at Moonee Valley it being one of my favourite race courses, and generally excellent for taking action photos.

It’s not every day that you come across a unicycling juggler, so I couldn’t resist getting a photo of this friendly bloke, who was only too pleased to pose for it. 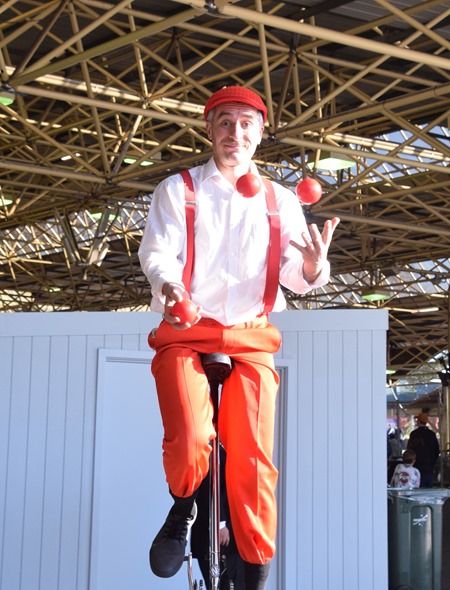 Next Saturday the racing returns to Caulfield where the Group 1 Memsie Stakes is the feature race, with an interesting support card. Black Caviar’s second foal, a colt named Prince of Caviar, is nominated for the Group 3 HDF McNeil Stakes, so I hope he is part of the field at acceptance time, as I’ve yet to see him in the flesh.