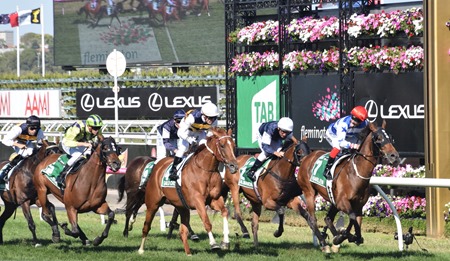 The training team of David and Ben Hayes and Tom Dabernig certainly had a good day last Saturday, winning both Group 1 races with imported horses.

Redkirk Warrior accomplished a rare consecutive win of the Newmarket Handicap and Harlem, unfancied in the betting, won the Australian Cup at big odds of 60/1.

Despite the extreme heat of the day, it was worth making the effort to attend, though it seemed to me to be a long drawn out afternoon, and it was with relief that I climbed onto the train after the running of the Australian Cup.

Being obliged by train timetables – the last Flemington train was at 12.30pm – I arrived at the course as horses engaged in Race 2 were filing onto the track.  I didn’t bother photographing the action, but noted that Kings Will Dream notched up his fifth win in succession.

I headed for the stalls and dallied there, missing  Race 3 as well, as it didn’t strike me as all that interesting. It was almost impossible to get photos of the horses in their stalls owing to the rampant roses, and besides many of the Group 1 runners had not yet arrived. 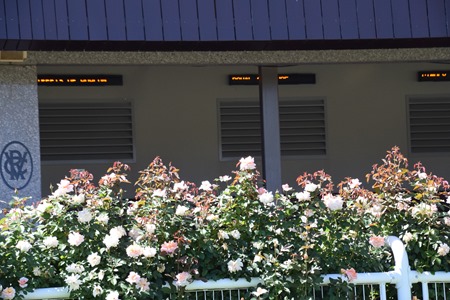 Rose hedge around the stalls

Might and Power and Efficient were the special guests from Living Legends so I did manage to snap a shot of old fave Efficient. 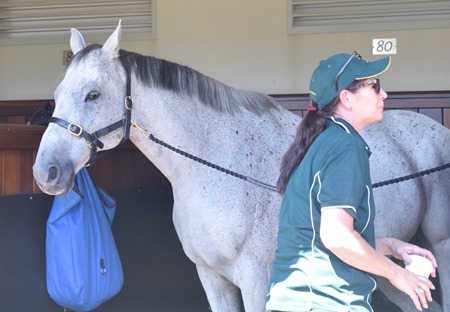 The Group 2 Sires Produce Stakes was the fourth race on the card, so I trudged up the public lawn to my favourite spot at the access gate on the west lawn. As the rail was out 4 metres, it was difficult to get shots without the outer rail intruding. I’d normally move further up the west lawn to get clear photos of horses going to the barriers, but this area was blocked off by a wine and food pop up facility.

A race for two year olds over 1400 metres, it was won by the unfancied Not A Single Cent, having only his second start.  Favourite Seberate ran second with Akkadian running third. 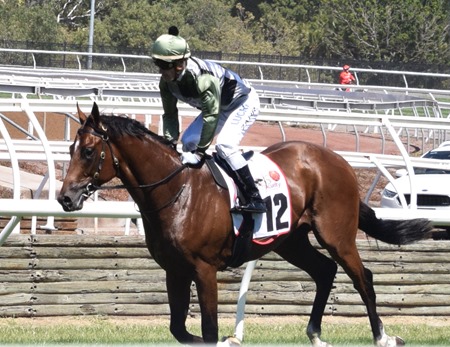 Not A Single Cent returns to scale

As it was far too hot in the sun, between races I sought out shade in various spots around the public lawn, and only returned to the access gate when the runners in the next race were leaving the mounting yard for the track. I don’t know why I bothered taking photos with the rail being a problem, but I suppose it was a distraction from the relentless sunshine.

Race 5 was the Group 2 Kewney Stakes for three year old fillies and is run over 1400 metres.  The so far unbeaten Summer Sham was the starting favourite and led for most of the race, but she was outclassed over the distance and finished well back in eighth place.  The winner Bella Martini raced just off the speed in third place and toughed it out to beat Shokora and Palazzo Vecchio. 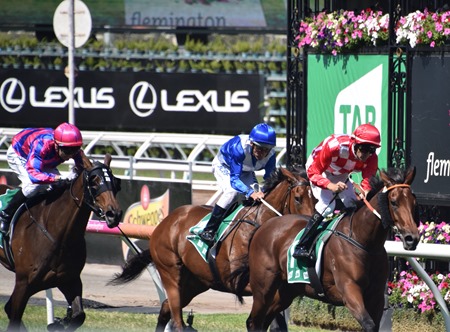 The Newmarket Handicap was the next race to jump, so I pegged out a rose free spot on the mounting yard fence for the pre-race parade.

Here are some of the main contenders. 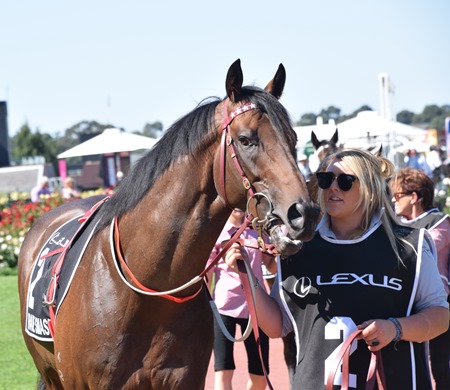 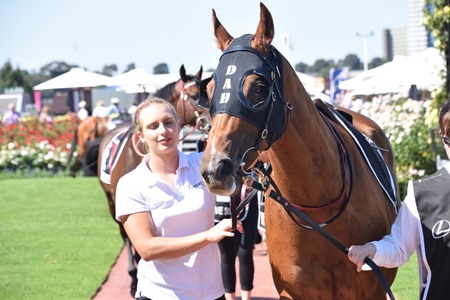 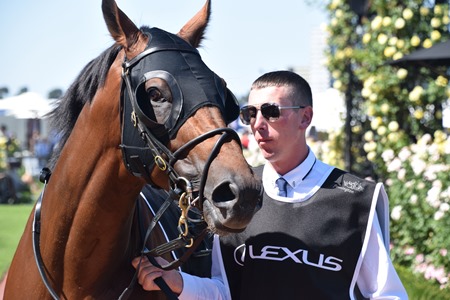 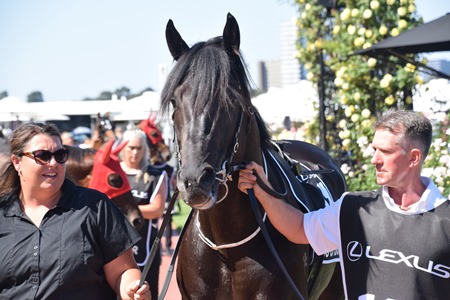 As is the norm in sprints down the long Flemington straight, the field split into two, one on the inner rail and the other on the outer. As a result, Redkirk Warrior who was brushing the roses on the outer fence, defeated Brave Smash on the inner fence by a half head, with Merchant Navy running third. 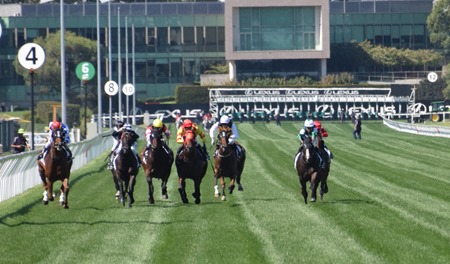 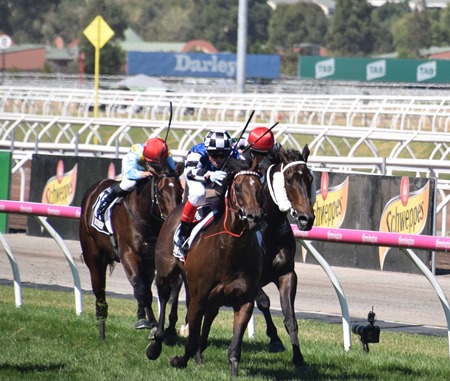 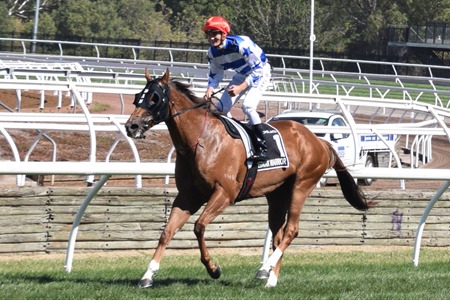 The first of the Group 1 races at Randwick, the Canterbury Stakes,  was scheduled shortly after the running of the Newmarket Handicap, so I sauntered closer to the big screen to watch it and found a place to sit down, albeit in the sun.

The rose hedge was splendidly in full bloom… 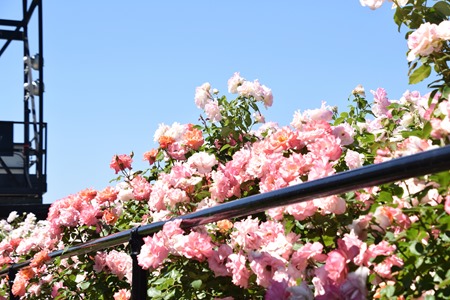 Anyway, the Canterbury Stakes resulted in a win for Happy Clapper with Global Glamour running second and Invincible Gem third.

Back at Flemington, Race 7 was the Group 3 Schweppervescence Trophy, a race for fillies and mares over 1600 metres. Spanish Reef was one of the few favourites to win at Flemington on Saturday. She defeated Samovare by three quarters of a length with Jester Halo two lengths back running third. 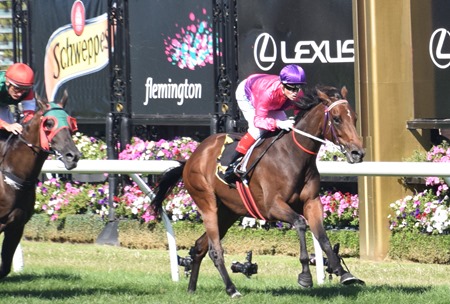 As I was fed up with trying to get rail free photos, I decided to go back to a spot opposite the finish line where the horses returning to scale enter the path to the mounting yard. It’s not a bad spot for taking photos from a different angle, with the bonus of the winning post in the background. 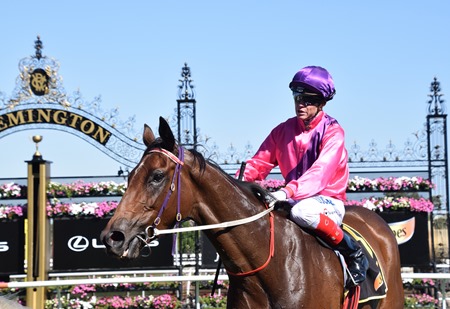 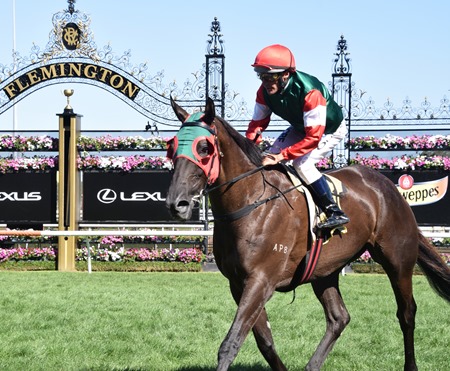 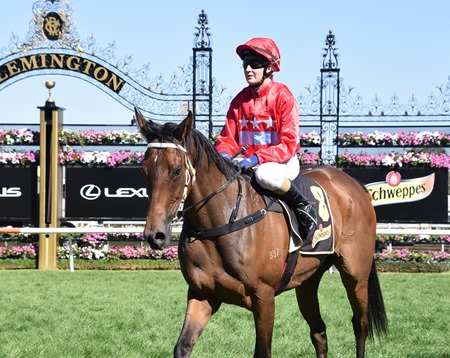 Before the Australian Cup field assembled in the mounting yard, I watched the Randwick Guineas on the big screen. Kementari was the outstanding winner.  Pierata ran second and Trapeze Artist third.

I’d been at Flemington for four hours, so I was thankful the feature race was finally ready to race.

Here are some of the major contenders in the mounting yard… 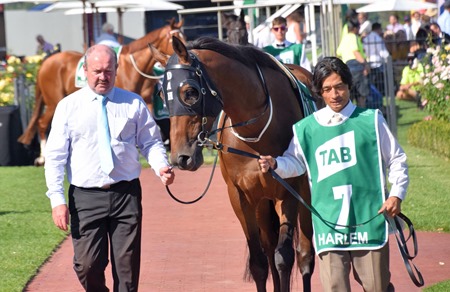 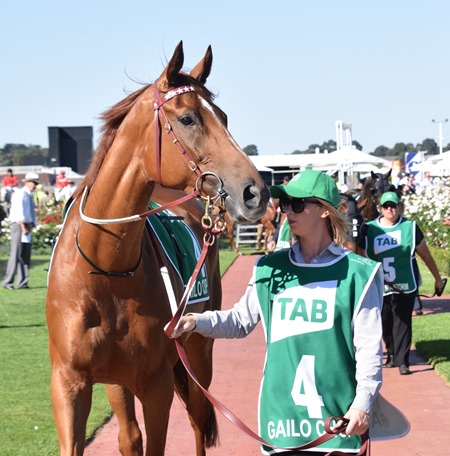 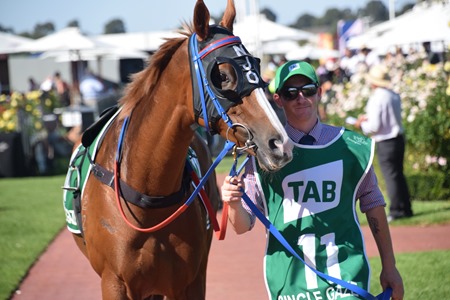 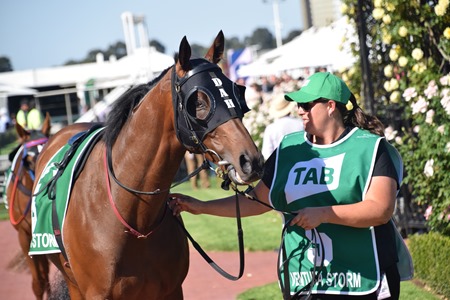 It was reported in the racing press that Lloyd Williams, who had three horses entered in the Australian Cup (Almandin, The Taj Mahal and Homesman)  had advised that he would recommend that The Taj Mahal and Homesman be ridden positively (i.e. on the speed) and Almandin ridden quietly. This all sounded as if he was using the former two horses as pacemakers for Almandin, and a challenge for Gailo Chop who likes to lead.

That plan unravelled when The Taj Mahal and the Gai Waterhouse trained Supply and Demand fought out the lead for most of the race, only to fade and finish well back. Harlem raced handy in fourth spot on the fence, then was blocked for a run, but he found a gap and went on to beat Gailo Chop by half a length with Ventura Storm another length back running third. Almandin ended up running fourth. 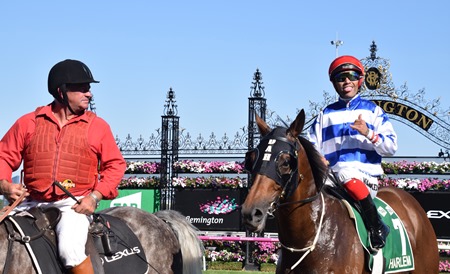 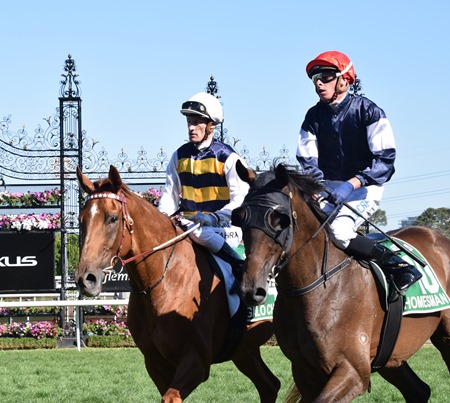 And that was another Australian Cup run and won.

I was contemplating going to the Blamey Stakes meeting at Flemington next Saturday ostensibly to see 2017 Melbourne Cup winner Rekindling who was nominated for the feature race, but owner Lloyd Williams has decided not to run him this autumn after all.

Anyway, next Saturday is forecast to be as hot as the previous one, so I’m glad not to attend.

As for Melbourne’s autumn carnival, as I’ve mentioned before, it has been underwhelming with very few highlights that I can think of, though of course I can say I saw Redkirk Warrior win both the Lightning Stakes and Newmarket Handicap.

Group 1 racing continues on in Sydney and we have Winx next race to look forward to on 24 March.