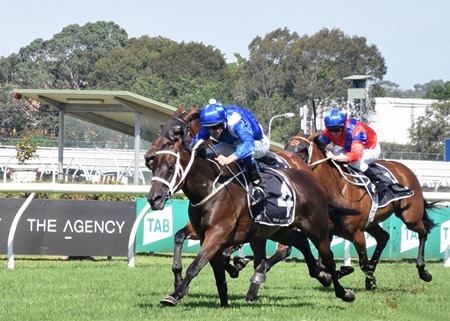 Unlike the last time I went to Sydney for the Queen Elizabeth Stakes, on this occasion the only travel hitch was the plane from Melbourne to Sydney, which took off a hour after the scheduled departure time.

So I got to Sydney around 12.30pm, but everything proceeded smoothly from then on. Stowing my carry on case at a storage facility at Central Station took only a few minutes, so I was on a train to Rosehill by 12.40 pm.

As it’s quite a long trip out to Rosehill, it was fortunate the train was a limited express, and took approximately half an hour to reach Clyde, where you were obliged to change to a train heading to Rosehill. It was not a long wait between trains and I arrived at Rosehill shortly before the running of Race 3, the N E Manion Cup, a Group 3 race for stayers run over 2400 metres. After purchasing racebooks and Golden Slipper pins, I headed trackside and easily found a spot on the fence near the mounting yard to practice photography.

The mounting yard view is limited for general admission patrons, so I concentrated on getting photos of horses leaving the yard and proceeding under the Yellow Rose Arch to the track, and action shots of the races, as the fence is quite low and you can get rail free shots. 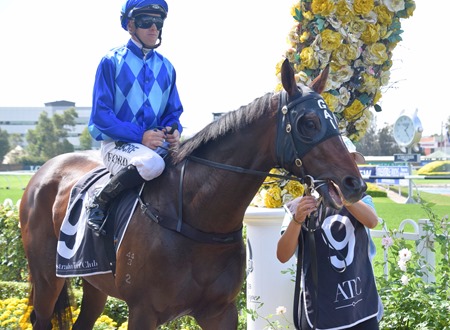 Alward (who ran second) heading to the track from the mounting yard.

The race was won by the Darren Weir trained Master of Arts, with Alward a narrow second and race leader Peribsen hanging on for third.

Master of Arts leads the field to the finish line 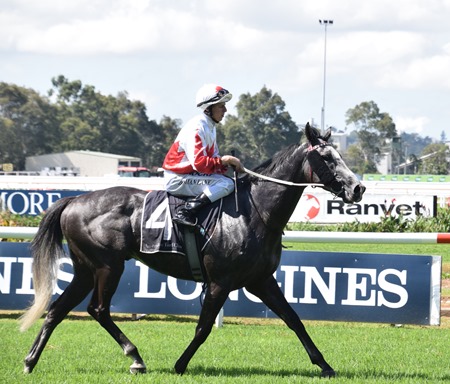 Master of Arts returns to scale

I killed time until the next race by visiting the stalls area, and found Winx there. As usual there was a crowd outside her stall, but nothing like the throngs that surrounded her stall at Moonee Valley on Cox Plate day last year. 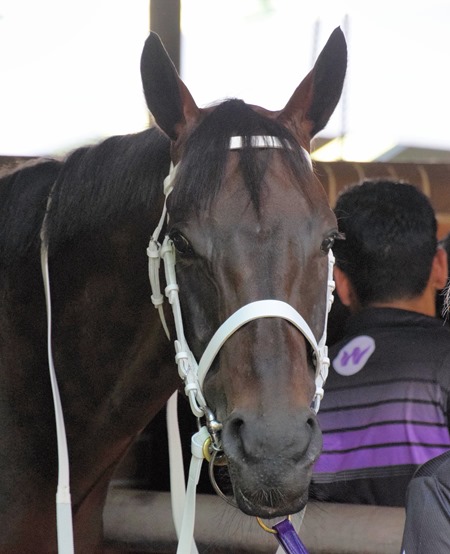 Winx in her stall

Nearby was star three year old colt Kementari, a beautiful black son of Lonhro, who is  said to be the spitting image of his famous sire. 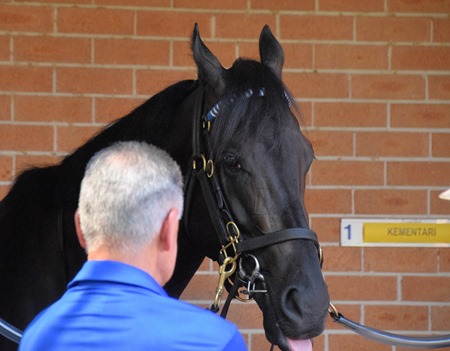 The first of the Group 1 races was up next, the Ranvet Stakes, and the Darren Weir trained Gailo Chop was the starting favourite and didn’t disappoint, winning the Ranvet by three lengths from the game Single Gaze, with Prized Icon running third. 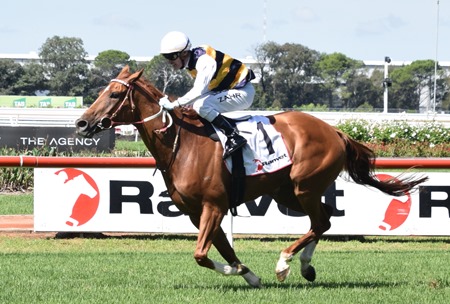 Gailo Chop streets ahead charging to the finish line 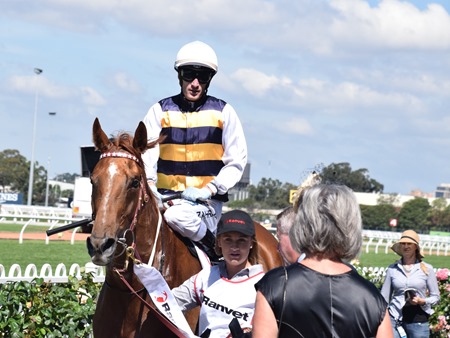 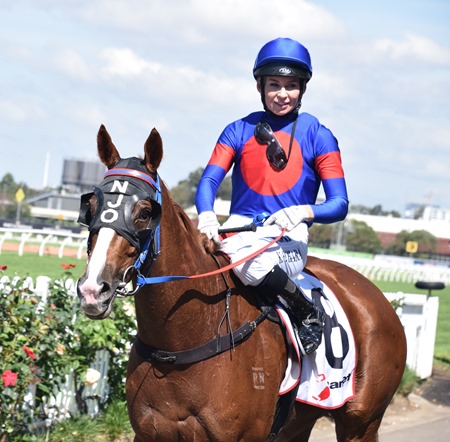 As the George Ryder Stakes was next to run, I stayed where I was to be sure of getting a good spot to watch Winx. A lot of other people had the same idea and soon fence positions were scarce. Winx flags fluttered from hands along the fence and an air of sharp anticipation rippled through the course.

The small field proceeded along the path to the mounting yard, but everyone had eyes only for the star attraction. 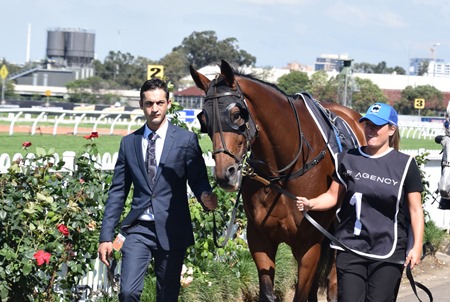 Happy Clapper on his way to the mounting yard 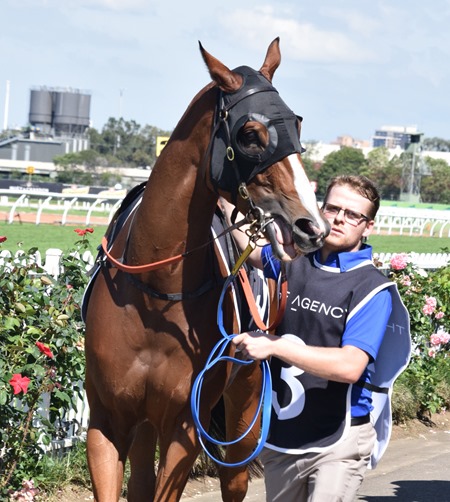 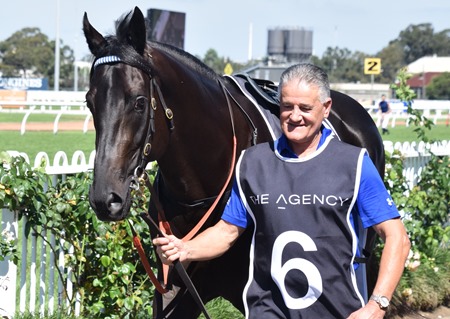 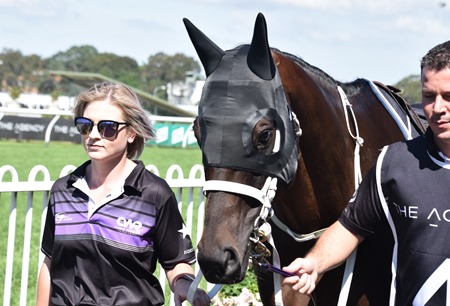 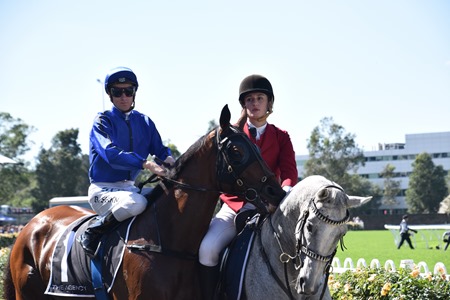 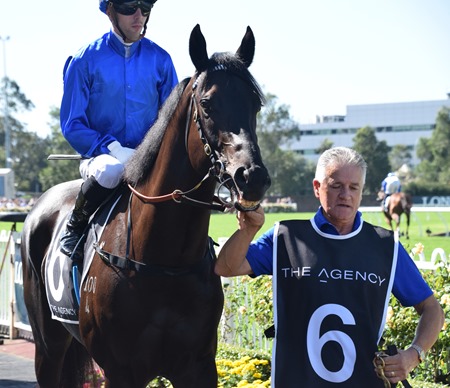 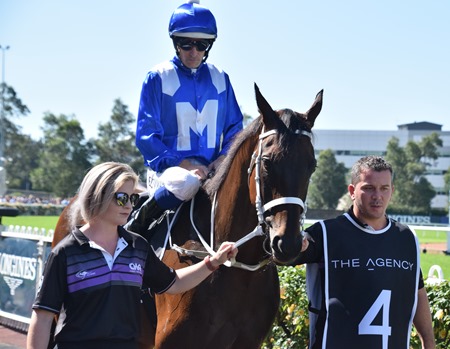 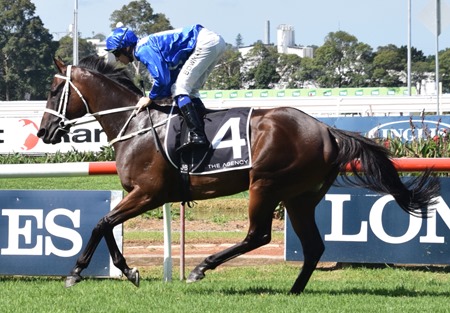 Winx on her way to the barriers – glowing with health

Any race Winx contests is always of the utmost interest, and even though you expect her to win, there’s the question of how she will accomplish it and by how much of a margin to the second horse. Winx’s first race this autumn saw her win by 7 lengths. This time she had a fight on her hooves with Happy Clapper putting up a challenge down the straight. Winx ran the fastest last 600 metres section of the day and prevailed over Happy Clapper by almost a length. Kementari did well to run third 1.5 lengths behind.

Winx has now won 24 consecutive races and a record breaking 17 at Group 1 level. She is set to equal Black Caviar’s unbeaten winning sequence of 25 in the Queen Elizabeth Stakes on 14 April and will possibly surpass the great sprinting mare’s tally either overseas (now thankfully off the agenda), or next Spring, which will hopefully include a 4th Cox Plate.

If we lived in extraordinary times during Black Caviar’s racing career, racing fans are now enjoying  an even more awesome champion of the turf in Winx, perhaps the best ever. 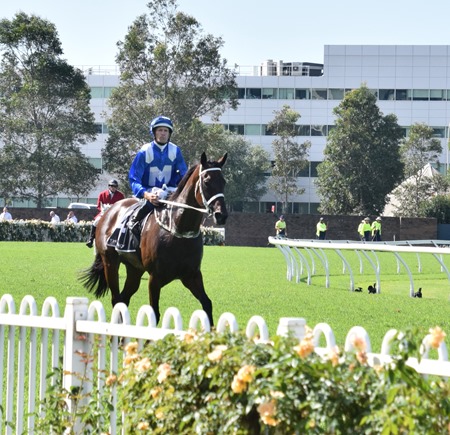 Rosehill is a pleasant little race course, much the same size as Moonee Valley, and I was glad to be back there again. There were obviously no restrictions on taking photos or the focal size of lenses. There were several other amateur photographers near where I was standing, including a guy with an enormous lens that blocked everyone else’s views.

After the Ryder Stakes I decided to go and get a drink from the nearest bar in the JR Fleming Stand, which meant standing in a queue for quite a while before being served.  I visited the stalls after that to see if Chris Waller was around and willing to sign my racebook. There was no sign of him, but Winx was resting in her stall, looking bright and beautiful despite just running a race.

As a consequence of all this dillying and dallying I missed the Rosehill Guineas and arrived back trackside as the winner, D’Argento, was returning to scale, an elated Hugh Bowman on his back. Hugh had reason to be cheerful having just won a Group 1  double. 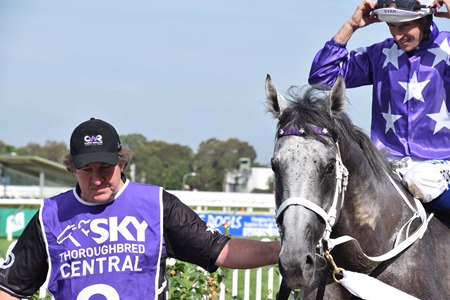 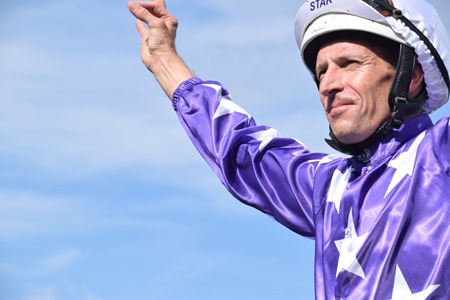 As the Golden Slipper Stakes was up next, I figured it was time to peg out a spot on the fence to watch it.  Unlike Moonee Valley on Cox Plate day last year, where we had to guard our spot on the fence for over four hours, at Rosehill it was amazingly easy to find a good position. The Rosehill outdoor public area is tiered, with several steps going up from ground level, so just about everyone gets a good view of the racing action.

This was the first time I had attended a Golden Slipper meeting and watched the famous (and richest) race for two year olds in person, though I have religiously watched it over the years on TV. So it was a bit of thrill to be at Rosehill for the 2018 edition.

I was particulary keen to get photos of Sunlight, the winner of the Magic Millions Two Year Classic, and I got quite few, such as the one below 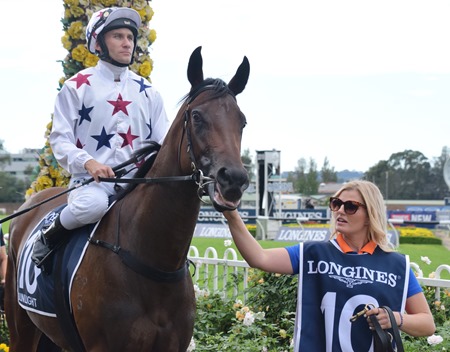 Sunlight leaves the mounting yard for the track 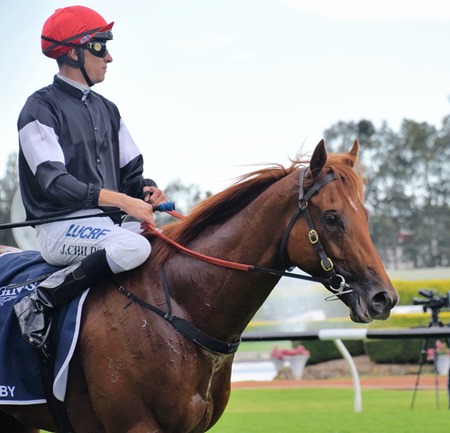 Anyway before the race was run, there was a bit of pomp and ceremony, starting with a line of 16 girls bearing name banners for each horse in the race. They marched up the path to the mounting yard, and stood around colourfully while the Golden Slipper jockeys were introduced one by one. 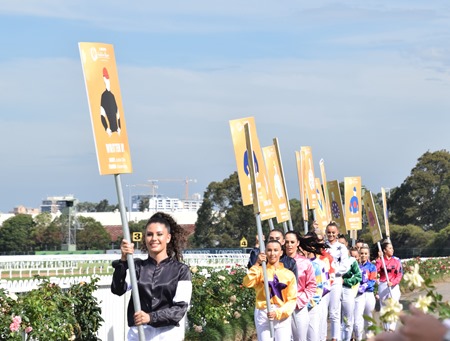 Then the field started assembling in the mounting yard, and shortly afterwards proceeding to the track.

The weather looked threatening with a dark cloud moving over the course, but the rain held off until after the race was run and won.

Unfortunately my photos of the race finish turned out too dark to use, but I got lots of photographs of Estijaab returning to scale after her thrilling victory. She led from the start to the finish, and had enough in the tank to hold off Oohood who finished second, and Sunlight who ran third. So it was a fillies trifecta, with Written By officially fourth. 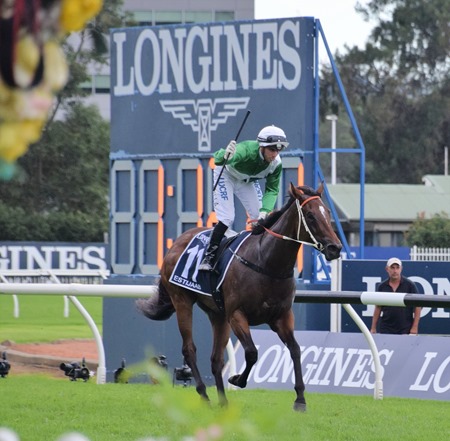 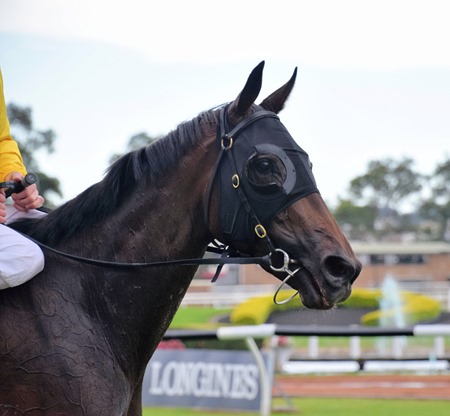 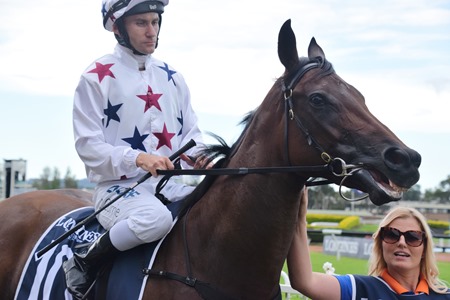 Though the final Group 1, the Galaxy was yet to run, I decided to call it quits after the Golden Slipper and head back to the city, as I was feeling weary after a long day on my feet.

On the train back to the city a couple of guys were sitting near me all dressed up and ready to party. They obliged me by posing for the following photograph – Sydney personified! 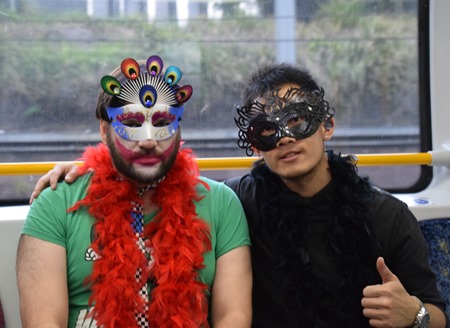 Once back in the CBD I collected my bag from the storage place and headed for my hotel, where I dined in the Bistro and retired early to my room.

I had to get up at 5.00 am the next morning to catch a 7.00 am plane to Melbourne. This flight departed only ten minutes late and I got back to Melbourne well before midday after an uneventful flight.

By the time I finally made it home, I had travelled by train to Sydney airport, by plane to Melbourne airport, by bus to Southern Cross station, from where I caught a train to Clifton Hill, then a bus to Ivanhoe Station and walked the rest of the way.

So that was my weekend.

Though tiring, it was worth the effort and I’d do it again, now that I’ve sorted out all the contingencies involved.