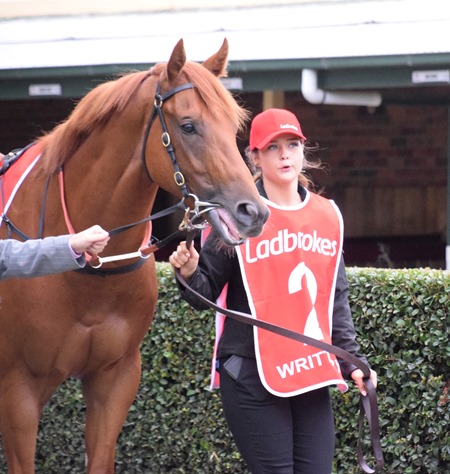 Written By – can he win the Blue Diamond / Golden Slipper double?

As I’ve previously mentioned the Melbourne autumn racing season was disappointing overall, but in Sydney this weekend the race card at Rosehill looks excellent by contrast.

It’s Golden Slipper Day and it features five Group 1 races that include wonder mare Winx in the George Ryder Stakes.

As I had a concert to attend on this coming Saturday night, I originally planned not to attend the Golden Slipper meeting. That’s all changed as B, who was attending the concert with me, decided he didn’t want to go as getting to the venue (Palais Theatre in St Kilda) would be difficult in the extreme. With all the roadworks in progress between the northern and southern suburbs, it would be a pain to drive through. I have seen the artist Jason Isbell several times before, so don’t really mind missing the show. I sold the tickets on Gumtree in no time flat as the seats were actually very good.

Anyway, with the concert no longer an obligation, I decided I’d  go to Sydney for the Golden Slipper after all. So I’m Sydney bound again and hope things go more smoothly than the last time I travelled there.

Besides the Golden Slipper and George Ryder Stakes, there is also the Rosehill Guineas, Ranvet Stakes and Galaxy, all attracting quality fields, so it promises to be excellent in terms of good racing.

Winx faces five rivals in the George Ryder Stakes,  and should win it easily, especially as the track is likely to be on the slow side.  Her biggest threats are Happy Clapper and three year old star colt Kementari.  Hopefully the unthinkable will not happen and that Winx will clock up her 24th win in succession and 17th Group 1 victory. Go Winx!

The Golden Slipper has a field of 16 runners and comprise equal numbers of colts and fillies. Top picks of the colts are Blue Diamond Stakes winner Written By who is yet to be beaten having won his four starts, Santos and Aylmerton who have both won their last two races, and the Chris Waller trained Performer who was the early Golden Slipper favourite.

Of the fillies the standout is Sunlight who has a picket fence of five wins from her last five starts against her name, winning the Magic Millions Two Year Old Classic back in January , and the Group 2  Silver Slipper Stakes and Group 3 Magic Night Stakes at her last two starts. She certainly looks special. Other fillies with a chance are Enbihaar, Estijaab and Seabrook. As it’s a race for two year olds, anything can happen and often does.

The Ranvet Stakes (2000 metres) is the first of the Group 1 events and has a small field of familiar contestants that include the 2018 Australian Cup trifecta  Harlem, Gailo Chop and Ventura Storm along with Single Gaze and The Taj Mahal and 2016 Victoria Derby winner Prized Icon. The last mare to win the Ranvet Stakes was Silent Achiever back in 2014 , the only time before next weekend that I  have been to Rosehill. Does that bode well for the honest Single Gaze?

As for the Rosehill Guineas eight of the eigthteen strong field are New Zealanders with good NZ form and it’s understandable that NZ trainers would send their young stayers to Sydney in the autumn, as quite few Kiwis have won the Rosehill Guineas and Sydney Derby.  Last year Gingernuts won the Rosehill Guineas, and before him there was  Volkstok ‘n’ Barrell (2015) and It’s a Dundeel (2013). My sentimental pick is Ace High, so I hope he wins, but he’ll have to beat New Zealand Derby winner Vin De Dance, trained by the canny Murray Baker, and the in form Cliff’s Edge among several other challengers.

Sydney weather on Saturday is forecast to be partly cloudy and 28°C, though as it has rained there over the past few days, the track should be rated soft, which will suit the mighty mare.

Anyway, here’s hoping for good fortune in Sydney on Saturday and that I am not cursed by public transport, as I was yesterday when I went to Victoria Market and chose to catch the 250 Bus. Just near Rushall Station (my old stamping ground) the bus driver advised that he had been ordered to terminate the bus trip. So I plodded to Rushall Station and caught the train for the rest of my journey to the city.