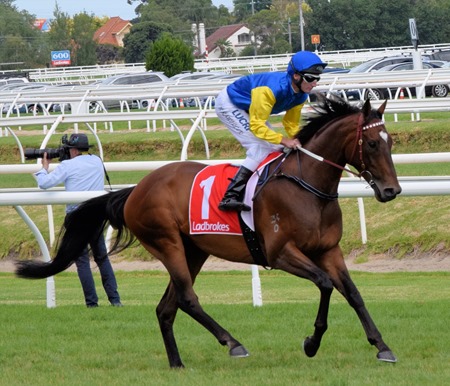 The Orr Stakes is scheduled as Race 8, so it’s going to be a long afternoon in the sun at Caulfield Racecourse.

Fortunately there are a plethora of interesting races before the feature event, starting with the two Blue Diamond Preludes as race 2 and 3.

The fillies Prelude is run first and is classed as a Group 2, whereas the colts version is Group 3, even though the prize money and distance (1100 metres) is identical.

A great field of 13 fillies have accepted for the girls race, headed by the more experienced Oohood and Crossing The Abbey who ran second and third to Lady Horseowner in the Blue Diamond Preview. Other top chances on form are Al Naifa, Pure Elation and Downloads, the latter two also contesting the BD Preview.  I’m interested in seeing Angel, the half sister to 2013 Blue Diamond Stakes winner Miracles of Life, who won her only start in a maiden race in Geelong in early January. Can Angel emulate her big sister and  win in the Blue Diamond?

Fourteen colts will be contesting the boys Blue Diamond Prelude, the main chances being Ollivander and Run Naan along with Written By, Plague Stone and Native Soldier. Four in the field are having their first start, so who knows what chance they have.

Race 4 is the Carlyon Cup for middle distance/stayers run over 1600 metres. It’s not that interesting as races go, so I won’t preview it, however Race 5, the Kevin Hayes Stakes sees the return of smart fillies Shoals and Tulip to the track. Shoals won the Group 1 Myer Classic at Flemington  at her last start in Spring last year so is the class filly in the field.

The Group 2 Rubiton Stakes, a sprint over 1100 metres, has a top field and remarkably the barrier draw matched each horse’s saddlecloth number – a rarity. Whether the  field will finish in that order remains to be seen.

Horse number 1 is Rich Charm who has an excellent chance of winning, having been successful at Caulfield on three previous occasions, the most recently on Caulfield Cup day where he won a Listed sprint.

He will however have to beat classy colt Merchant Navy who won the Group 1 Coolmore Stud Stakes at his last start.  Others with a chance are Super Cash, Prezado and mystery New Zealand colt Ardrossan, now with the Mick Price stable,  having his first start in Australia.

The Orr Stakes is worth the wait having attracted a really interesting field with six Group 1 winners out of thirteen runners.  One of the main chances is Hartnell, cursed during the Spring racing carnival, winning only one race. At his best he’s too good to overlook. Then there’s Tosen Stardom, the former Japanese galloper who won the Group 1 Toorak Handicap and Emirates Stakes in Spring and the other Japanese horse Brave Smash who ran third in The Everest.

Several mares have won the Orr Stakes in recent times, Suavito in 2016 and Black Caviar in 2012, and any of the four mares in the field could be a serious contender, particulary Single Gaze who always runs an honest race and Shillelagh who won the Cantala Stakes in Spring.

The last three year old to win the race was Black Caviar’s little brother All Too Hard in 2013. Whether Caulfield Guineas winner Mighty Boss can repeat this feat is doubtful, but his weight advantage could be useful.

In Winx news, she will now kick off her autumn in the Chipping Norton Stakes on 3 March, due to a careless riding suspension incurred by her regular jockey  Hugh Bowman that prevented him riding the champion mare in the Apollo Stakes on 17 February. For one dizzying moment there was talk of running Winx in the Futurity Stakes at Caulfield on Blue Diamond Stakes Day, but alas for us Melbourne fans, the Chipping Norton option was decided upon.

And it was pleasing to read that Gingernuts, who sustained a serious injury on Emirates Stakes Day last year, has now returned to New Zealand in good condition, where, even if he never races again, he will  be cherished to the end of his days.