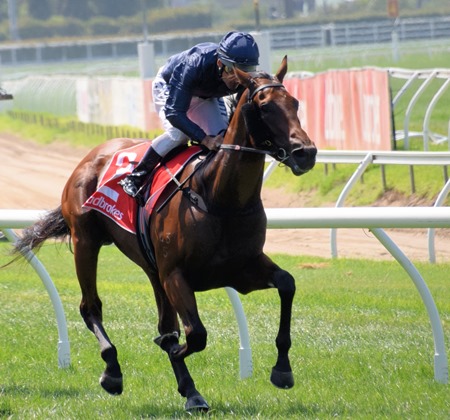 The Blue Diamond Stakes is the feature race next Saturday at Caufield and it has to be one of the most open competitions for years, with no real standout colts or fillies. Even Long Leaf, the current favourite is $7.00 on the tote and several others share second favouritism, priced between $8.00 and $10.00.

As usual a full field of sixteen will be competing for the prize and most of the them have (on form) the ability to win the 1200 metre dash.

Of the colts, Long Leaf, Written By, Prairie Fire and Plague Stone have all been prominent in the build up races, as have fillies Enbihaar, Kinky Boom, Lady Horseowner, Ennis Hill and Oohood.

As Saturday afternoon is forecast to be showery,  this could favour those runners who appreciate a bit of give in the ground.

Whatever the outcome, it looks a doozy of a race.

There are two other Group 1 events at Caulfield on Saturday – Futurity Stakes and Oakleigh Plate, which have both attracted excellent fields, the Oakleigh Plate in particular.

The Futurity Stakes  run over 1400 metres is the first of the Group 1 events to run and the field of  11 contestants is similar to the Orr Stakes; in fact eight of the runners contested the Orr Stakes. Black Heart Bart won the Futurity Stakes last year, but he is out of action for autumn.  2018 Orr Stakes winner, Hartnell  is not in the field, though will be running later in the afternoon in the Group 2 Peter Young Stakes. Fresh starters include Humidor and Sovereign Nation.  Top chances are Tosen Stardom, Brave Smash and the three year olds Mighty Boss and Showtime.

As the Group 1 races are scheduled as races 6,7 and 8, I can take my time getting to Caulfield and shan’t mind the delays in public transport caused by railway track updates.

Anyway I’m looking forward to seeing the action at Caulfield even though I suspect that my favourite spot on the hill above the stalls will be reserved for Young Members.