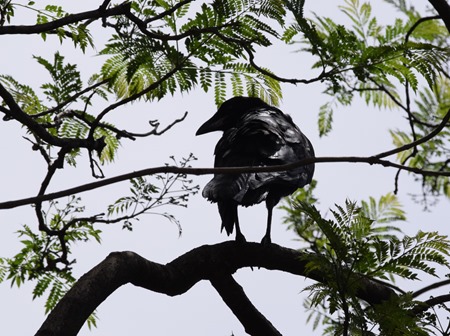 Raven in the Jacaranda Tree next door

Back when we lived in Northcote, the predominant sounds were the South Morang train screeching around the corner to the Rushall Station, and a hum of traffic from High Street, along with the usual barking of dogs, shrieks of lorikeets and buzz of lawn mowers.

Here in Ivanhoe, in the background there are coos and caws from the local pigeon and raven tribes, but apart from the weekend, when house and garden proud neighbours fire up their mowers and leaf blowers, it’s pretty quiet.

We have now been in the new house for two and a half months and have pretty well settled in, though I still have 19 boxes of books to unpack, having not got around to organising new shelving as yet.

As for the cats, they are both used to their new kingdom, though Talya took longer than Bingo to acclimatise.

The first night we spent here, I woke the next morning sandwiched between two cats under the covers. This was something Talya had never done before, and has repeated at various times when there is disruption in the form of workmen installing security doors, alarms etc.  And Bingo still irritates her intensely, though they have been observed (and photographed) snuggled together on Talya’s bed several times when the weather has been nippy. 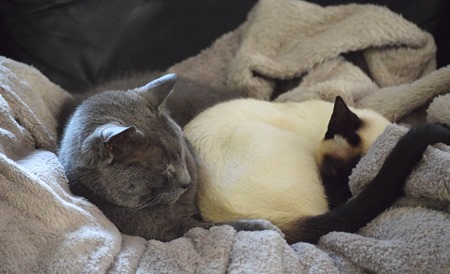 Bingo didn’t seem stressed at all. As long as his human slaves were willing to feed him, he was happy. He loves food with a passion, but doesn’t beg for it during the day, a snack of some kind involving zucchini staves off the hunger pangs.

He is a few days shy of his first birthday and is almost full grown. A small cat, he’s perfectly formed and a stunner to look at.

But he’s bad to the bone when he’s bored or hungry. We still have to lock him away when we’re eating or cooking, or else he’ll try and steal what he can while our backs are turned. And he’s a terrible distraction if you’re on the computer, running across the keyboard and executing keyboard shortcuts you never knew existed.

Typical of Siamese cats, he’s very vocal with a range of different meows – squeaks, chirrups, trills and yowls. You can have a conversation with him, though heaven knows what he’s saying. It reminds me of a story by Spencer Holst called The Language of Cats, wherein a guy learns to speak cat language from his Siamese Cat, with disastrous consequences. 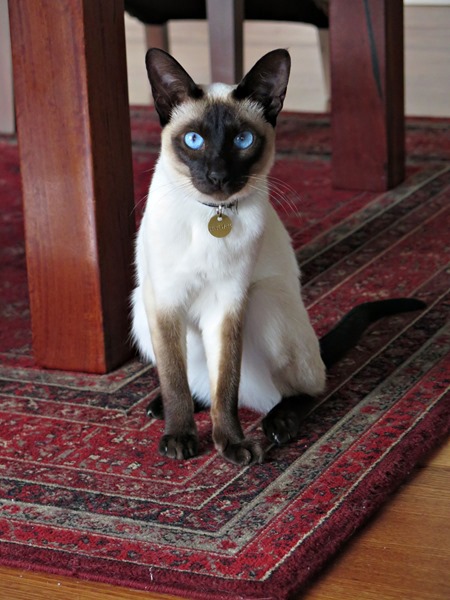 Bingo in the living room 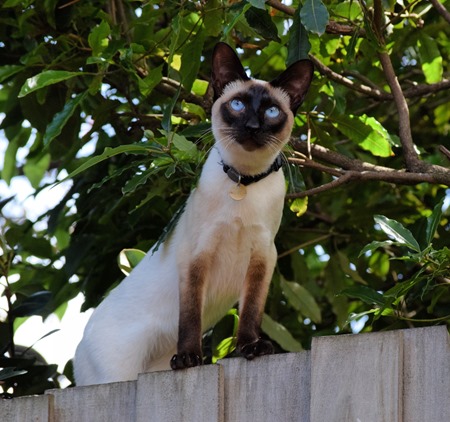 There don’t appear to be any neighbouring cats in the street, so the cats are spared the trauma of staking a claim on their territory from a prior claimant. I’ve only seen one other cat, a street away, a friendly British short hair who greets you as you pass by its place.

The neighbours on one side are bird lovers and feed the pigeons every evening. Other birds obviously get in on the act, the raven family for instance. There are four of them – two adults and their grown up chicks. I’d be more inclined to feed ravens than pigeons myself.

These particular neighbours also keep chooks, a source of fascination for young Bingo, who registered his first kill a couple of weeks ago. Not a chook, but unfortunately a fledgling lorikeet. Luckily the neighbours didn’t see this atrocity and we certainly didn’t tell them about it.

We are quite close to the Ivanhoe Shopping Village, but it took me some time to get used to the walk down there, it being much farther than I was accustomed to in Northcote. Your brain and body adjust after a time and it doesn’t seem as onerous these days as it was originally, though the words “it’s a long way to the shop if you want a sausage roll”, still run through my head as I plod up and down the three long streets to Ivanhoe Village.

The Ivanhoe house is a comfortable dwelling with ample storage in every room, cupboards that go up to the ceiling being part of the decor.  There are also picture rails everywhere so that all the old framed pictures I’ve been hoarding for years can now be hung in view. 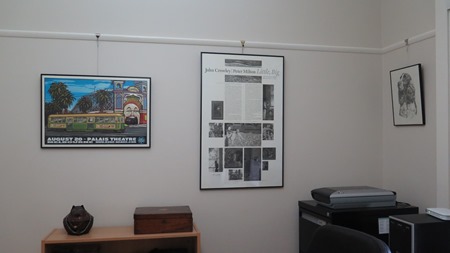 Pictures on the wall in the computer room – Ryan Adams concert poster from 2007,  John Crowley Little, Big print test and a Springer Spaniel drawing inherited from my deceased older brother.

I needed to get a few frames mended– one to replace the frame backing, the other to replace the glass that broke during the move, so I took them both to Ivanhoe Picture Framing,who fixed them both in a day for a reasonable price. The husband and wife team who run Ivanhoe Picture Framing are lovely people and certainly know their profession, as well as being interesting to talk to.

It made me want to take more stuff to be framed, so yesterday I went back and got some digital prints of three of my Winx Cox Plate photos (2015,2016 &2017). They were excellent prints and only cost a $1.00 each.  I’ll now get them framed with a Winx flag, to complement the Sunline signed photo I have hanging on the right hand side of the window, and take along a signed print of Black Caviar to be framed as well.

So my impressions of Ivanhoe Village are positive and I enjoy exploring the many shops and services it offers.

Oh I envy you your picture rail Anne. I think some new homes now have modern ones. A great feature.

And Bingo sure is a fine looking cat though he wouldn't be popular here if he caught any birds! Give us dogs any day, I'm afraid!

It's the first house I have lived in that contained picture rails. They're in every room and down the hall, so plenty of places to hang pictures. A pity the wall space is not sufficient for more book cases.