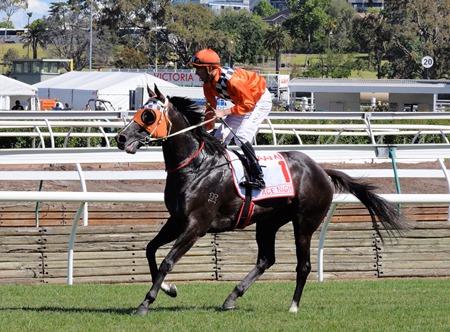 Ace High returning to scale after winning the Victoria Derby

I’m writing this review of Derby Day while waiting for the Melbourne Cup to run, and truth to tell it’s the first chance I’ve had to write it.

As anticipated I arrived at Flemington on Derby Day at around 1.15pm and caught up with my friend Rebecca in the stalls area. From there we waded through the teeming crowd to our favourite position on the access gate just past the finishing post to watch the running of the Group 2 Lexus Stakes.

The winner of this race, which is run over 2500 metres, gains automatic entry into the Melbourne Cup, and ten aspirants were in the running for the chance of a place in the big race. 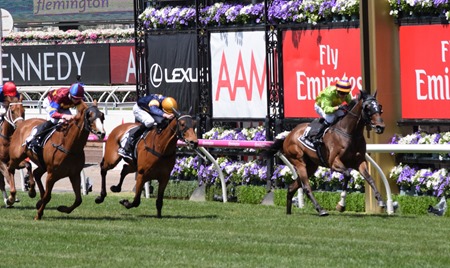 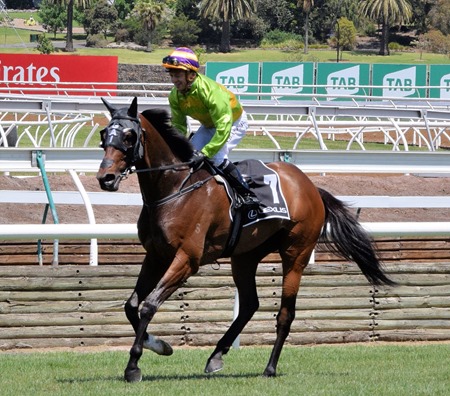 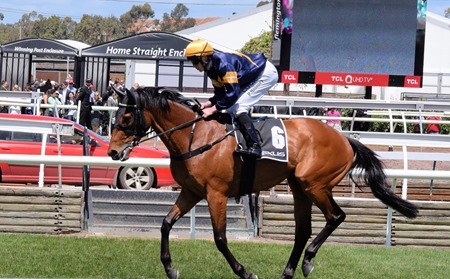 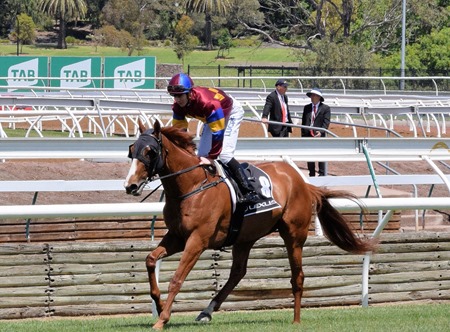 Discovering that we would have no trouble regaining our prime spot, we ploughed through the throng once more back to the Stalls area, hoping to find Chris Waller in attendance. I’d brought my 2017 Cox Plate and 2017 Queen Elizabeth Stakes racebooks with me in the hope of getting them signed, and Rebecca likewise had a couple as well. Chris Waller was checking out his runners – a large contingent – in the back stalls, and obligingly signed our race books when we attracted his attention. He’s a very nice man I must say.

Whilst in the stalls area I got a few photos of key runners, for instance Ace High. Ace High in his stall 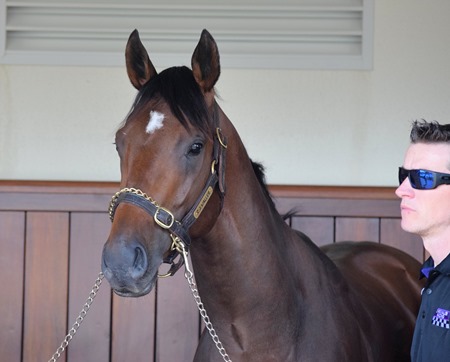 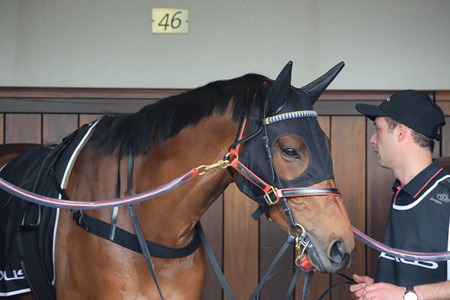 After getting Chris Waller’s signature we made our way arduously back to our spot on the access gate and stayed there for the rest of the day and didn’t bother with mounting yard photos. You couldn’t get near them anyway.

Race 5 was the first of the Group 1 events, the Coolmore Stud Stakes where a super field of three year olds had accepted to run. Any one of them could have won, but the prize went to the unfancied Merchant Navy who stole the show from leader Invincible Star by creeping up on the inside and winning by a neck, with Formality running third. 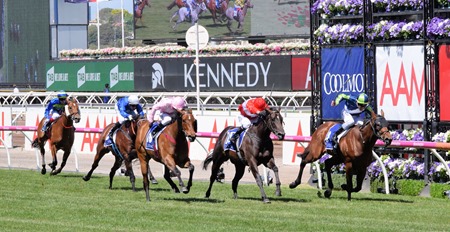 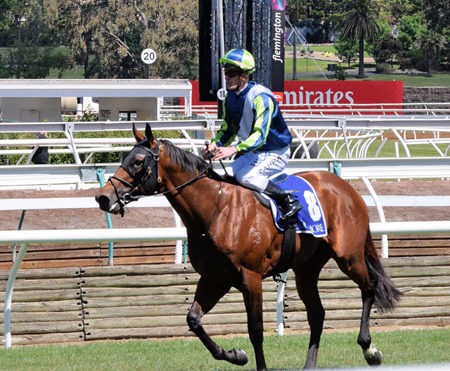 Up next was the Myer Classic where Global Glamour was the favourite. She led for most of the race but was overrun by Shoals, Eckstein and Dixie Blossoms and ended up finishing 9th.

Shoals became the second filly in a row to win from the mares, her lightweight (50kg) a distinct advantage as it was for I Am A Star last year. 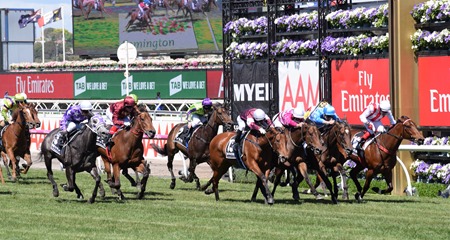 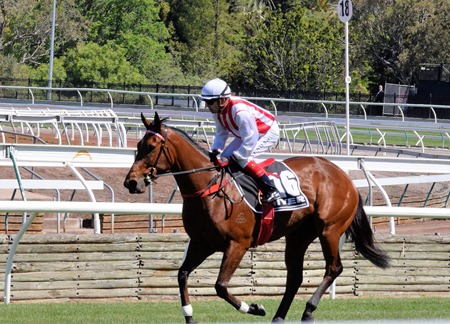 Eckstein on her way to the barriers 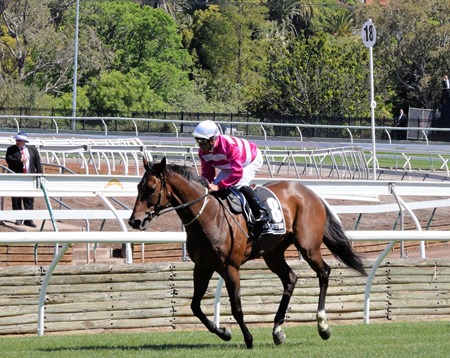 Ace High started as the favourite in the Victorian Derby and delivered an astonishing win. He was forced to race wide throughout most of the race, but charged to the front in the straight to win by two lengths from Sully and Astoria. He’s a son of High Chaparral who has sired quite a few Derby winners – Shoot Out, Dundeel and Monaco Consul to name three -  and a young stayer to watch for come Autumn. 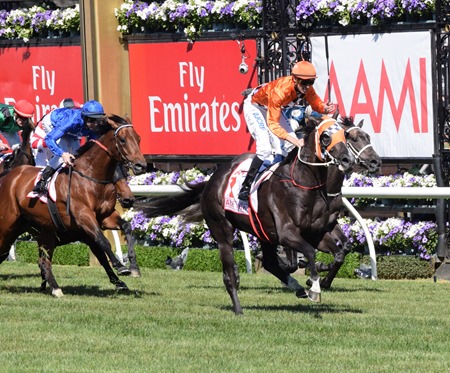 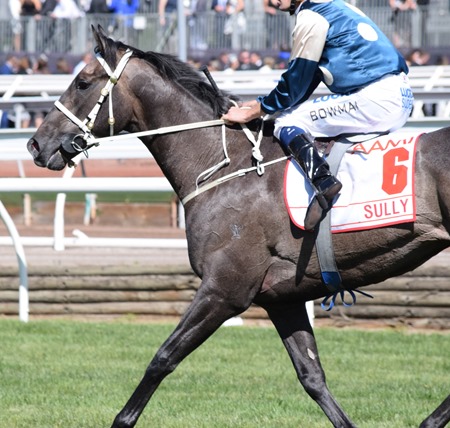 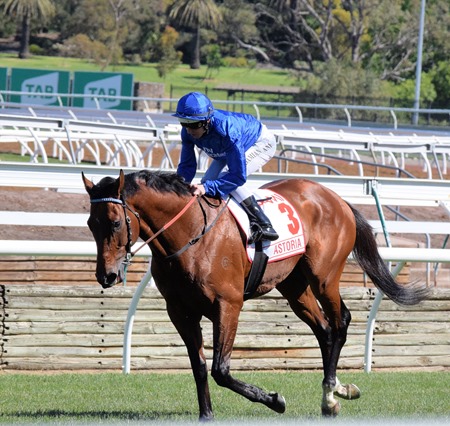 The final Group 1 of the afternoon was the Kennedy Mile and the Chris Waller mare Shillelagh won at big odds (12/1) from the eternal bridesmaid Tom Melbourne.  40/1 shot Wyndspelle ran third. 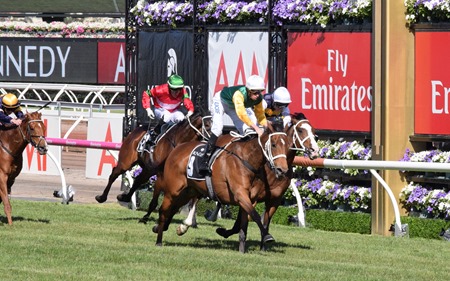 Shillelagh (outside) & Tom Melbourne fight out the finish. 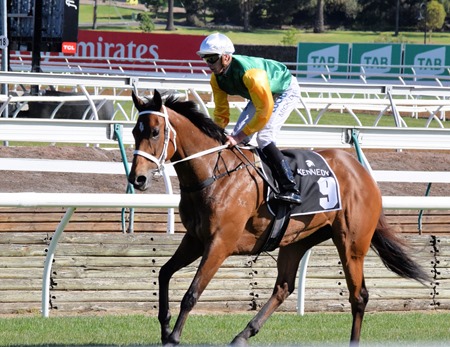 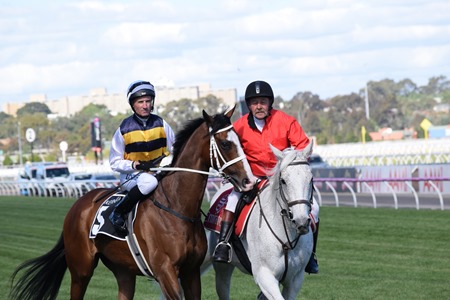 Tom Melbourne on his way to the barriers 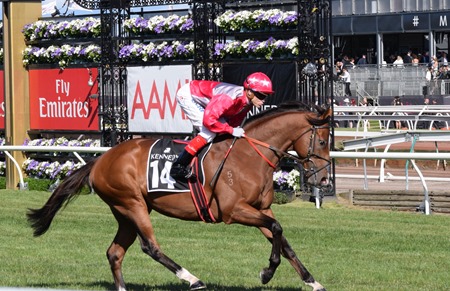 Wyndspelle on his way to the barriers

I headed to the station after the Kennedy Mile and reached home without any hassles, unlike patrons who left later who were stranded on a train between Kensington and Newmarket.

On the train I saw New Zealand trainer Murray Baker who was sitting behind me with I assume his wife. Nice to see he’s not living high on the hog and travels modestly.

I’ll probably go to Oaks Day on Thursday, then the Grand Final of the Melbourne Spring Racing Carnival on Saturday. Winx will not be starring in the Emirates Stakes, her connections deciding to give her a spell. Well done them.

Just watched the Melbourne Cup and am thrilled to bits that Rekindling won - one of my Astrological picks came in!  And another, Max Dynamite, ran third. Johannes Vermeer was second

I ended up having $5.00 each way bets on Almandin, Marmelo, Red Cardinal, Wall of  Fire and Rekindling and the latter’s payout covered my outlay and also yielded a profit.

Interestingly, Rekindling is also a son of High Chaparral