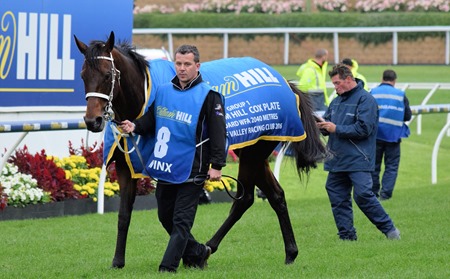 The 2017 Cox Plate promises to be an historic event with Winx becoming only the second horse to win it three times in succession. Kingston Town accomplished this feat in 1980, 1981 and 1982.

General Admission tickets have sold out,  for the first time ever, so I expect it will be crowded to the rafters.  Hopefully I can snaffle a good spot on the fence near the finish line. I am willing to stand for hours if I achieve this.

Winx will face eight rivals in the Cox Plate, none of them likely to steal the show, with recent Group 1 winners  Happy Clapper, Humidor and Gailo Chop in the running for second place, worth $440,000. That is if they are not upstaged by the lightweighted three year old Royal Symphony.

Hopefully there will not be a boilover as has been the pattern this Spring.

The Moonee Valley mini Spring Carnival occurs as usual over a night and a day with the Manikato Stakes being the feature race on Friday night. Can the grey flash Chautauqua repeat history and win it a second time? His previous win was in 2015 and was a spectacular last to first dash.  Last year Rebel Dane caused a boilover winning at big odds.

A younger generation of crack sprinters will be aiming to spoil his party, notably Vega Magic who narrowly missed winning The Everest , but prior to that won the Group 1 Memsie Stakes.

Others with a chance are Malaguerra, Hey Doc and speedy mares English, In Her Time, Viddora and Super Cash.

I will not be attending the Manikato Stakes,  but should have no trouble getting to Moonee Valley on Saturday. My intention is to arrive early – around mid day with any luck.

The weather for Saturday is forecast to be overcast and a mild 21°C with some rain expected, hopefully around 3.00pm if I miss out on a spot on the fence earlier.

Last year it was relatively easy to get a good spot with frequent spates of rain driving the crowd to take shelter.

No doubt it will be a memorable day, and hopefully one where Winx triumphs again.