Bingo Progress Report 6 –After the Snip 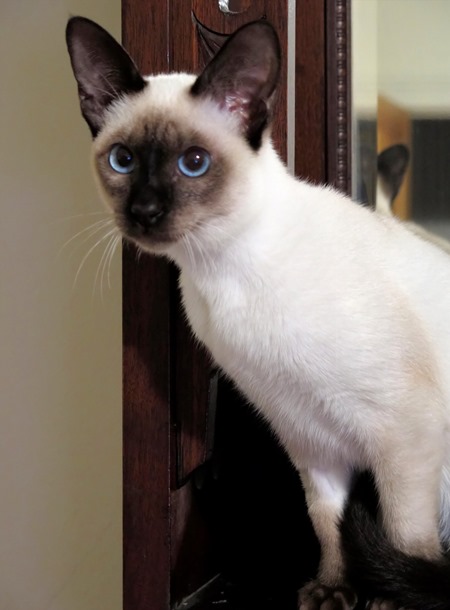 Bingo is now six months old and  grown quite a bit since my last report, and has been desexed into the bargain.

He was back to his mischievous ways  the day after his op, and as he has grown so has his scope for wickedness.

The state of affairs between Bingo and Talya is pretty much the same – he teases her and she retaliates, though with claws sheathed.

Sometimes it seems that she is playing chasing games with him until he gets too close and sparks fly again. They both get tetchy when they’re hungry, so when I’m doling food into their separate bowls there’s growling on Talya’s part as Bingo takes advantage of her distraction and tries to goose her, by tapping her back leg and darting away.

As is the case with most kittens, when they see birds in a tree they think they are easy pickings, Bingo has been sighted up one or other of the trees in the backyard going after birds.  The birds are wise to this and mock his efforts to reach them, perching temptingly close on a twig, whilst he chatters at them and vainly tries to find an easy way to bridge the gap. We’ve seen a blackbird teasing him, and a bunch of lorikeets as well, shrieking their amusement at his predicament.

Bingo is terribly interested in everything that happens and follows us around in a dog like fashion. Recently I washed the floor and guess who trailed me from room to room, but Bingo, fascinated by the mop and of course running over the newly washed floors.

He’s irrepressible and bad as bad can be when he’s in a lively mood. No sooner do you open a cupboard, than he’s in, ditto with drawers. He climbs into the toilet and jumps on the seat when you’re about to sit down. His table manners are non existant and you often find a kitten sitting on your shoulder as you munch a piece of toast, a hopeful paw reaching for the plate. He disconnects electrical cords and claws screens, not to mention running across the keyboard and opening multiple browser windows.

Despite all this he is very endearing and exceptionally pretty.

Considering that we got him to fill the gap left by Willy’s  death, Bingo has filled it to bursting.