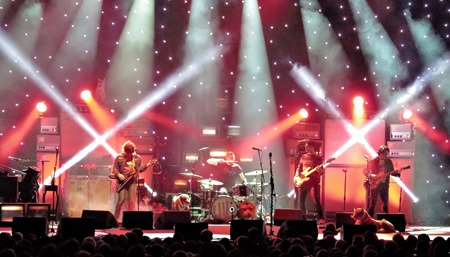 Margaret Court Arena is the little sister stadium to Rod Laver Arena and named to honour Australian Tennis star Margaret Court. It will probably be renamed after the said famous tennis star recently expressed homophobic views in a letter to the West Australian newspaper, stating that she would no longer fly with Qantas Airlines owing to  the Qantas CEO ‘s support for same sex marriage.

Ryan Adams, the star of Friday night’s stellar show remarked on twitter that as a Pagan he strongly supports marriage equality and  has since dubbed the venue Marriage Equality Arena. Ryan Adams has never been one for political comment, but since the advent of Trump he, like many other artists, has become more vocal on current social and political issues.

A sign of the New World dystopia in which we live these days, and as a reaction to recent terrorist attacks, there was a long queue at the approach to the entry doors of the arena, where every concert goer was individually searched and scanned before they could enter. This led to a delay in the evening’s time table, not necessarily affecting the support act, The Middle Kids, but causing the Ryan Adams’ set to start later than scheduled. At least that’s what Ryan Adams said at the end of his two hour performance; due to a curfew, rushing through the last two songs in lieu of an encore.

Anyway, on to the concert…

After enduring the security screening on entering the arena, my friend B and I, after a brief visit to the Merchandise Table,  found our seats and discovered that they weren’t too bad at all, a centre spot on the lower level that provided an excellent view of the stage, but a bit far away for decent non noisy photos. It was my first time at Margaret Court Arena, so I was not sure what to expect. As stadiums go, it was quite intimate in vibe and has a capacity for about 6,500 to 7000 people.

I did not take much heed to the support act other than to note that they were very loud. We basically caught the last half of their set by the time we took our seats.

After watching the roadies set up the stage for Ryan Adams, it was about an hour’s wait for the main act. I’m glad I opted for seated tickets, and didn’t envy the general admission standing crowd. At my age I don’t think I could stand for however many hours they were obliged to.

Favouring a low tech set, Ryan Adams decorates the stage with big amplifiers and banks of TV screens, and stuffed toy cats - three tigers, what appeared to be an ocelot, and a cardboard cut out of a cat perched on one the amplifiers.

Stage being set up

So it was approaching 9.30pm before Ryan Adams and The Unknown Band took the stage and launched into the first song of the set, Do You Still Love Me?,  the opening track on Ryan Adams latest album Prisoner, then followed with the second  track on Heartbreaker – Ryan’s first solo recording of 2000 – To Be Young.

Prisoner is a really likeable album that grows on you the more you play it, so it was no trial to be treated to quite a few songs from the record – Outbound Train, Prisoner, Doomsday and To Be Without You (my favourite song on Prisoner) – interspersed with older tunes from Ryan Adams 15 album back catalogue.

The Unknown Band sounded great for most of the songs, though I found myself longing for Ryan’s former band The Cardinals when they played songs from that era (2005-2009), ie Magnolia Mountain, Let It Ride etc., still vividly recalling the concert at the Forum in January 2009 – one of the best concerts I’ve ever seen. The arrangements seemed strange and somewhat clunky to me who has heard better versions in the past. 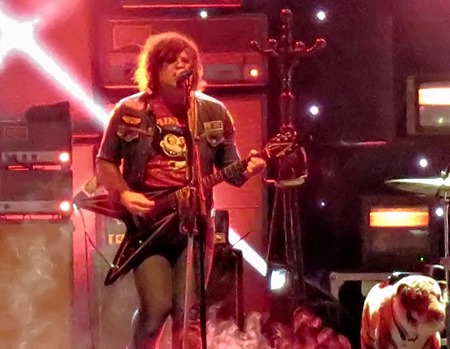 Ryan Adams rocking out (with tiger)

There was very little chit chat from Ryan during the concert, the songs being performed in fast sequence with hardly a pause, Ryan occasionally performing solo in the midst of what was a predominantly rock n roll set, his beautiful voice as always carrying clearly across the expanse of the arena.

The Melbourne audience was, as is generally the case, quietly appreciative and I did not witness any bad behaviour,  acknowleged by Ryan, referring to his recent show at Byron Bay which was spoiled by disinterested attendees who chatted loudly throughout his set.

This may be the last time that Ryan Adams will visit Australia, so I’m glad I got to see him perform live one more time.  Ryan Adams suffers from Meniere's disease, a chronic disorder of the inner ear that is exacerbated by long distance flights.

He’s a real trooper of a performer who gives his all in concerts despite his disability. 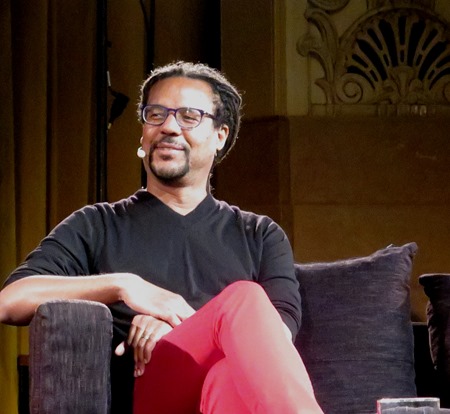 Colson Whitehead is the author of  six novels covering a variety of topics, and has recently attained fame and glory with his most recent novel, The Underground Railroad, which was championed by Oprah Winfrey and won the 2016 National Book Award and 2017 Pulitzer Prize.

A near full house was present at Northcote Town Hall on Wednesday night to see Colson Whitehead in conversation with Wheeler Centre Director Michael Williams. 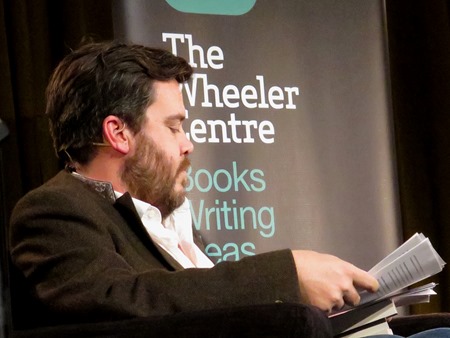 Colson Whitehead looks a cool guy and came across as unaffected and amiable, not making any big deal of being an American of black descent, though the conversation primarily  centred on that issue.

This focus was understandable in light of the subject matter of The Underground Railroad, it being about black slavery in America’s shameful past.

It was an interesting conversation as Colson Whitehead explained how he came to write the novel. He said that he had been thinking of it for many years before he finally wrote it, and that it took several years for it to be finished to his satisfaction.

He was astonished by the reception the novel received, particularly when he was obliged to appear on Oprah’s Book Club show. 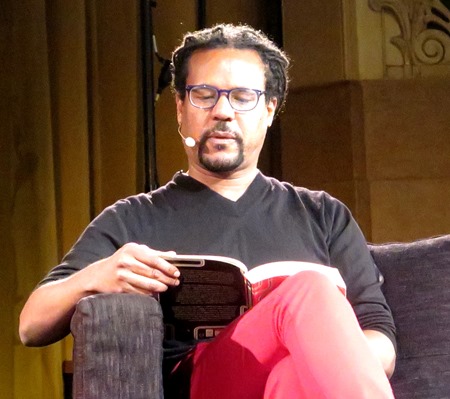 Colson Whitehead reads an excerpt from The Underground Railroad

I noticed that the event was filmed, but the podcast is now available to listen to here .

Posted by Anne S at 3:11 pm No comments: Links to this post 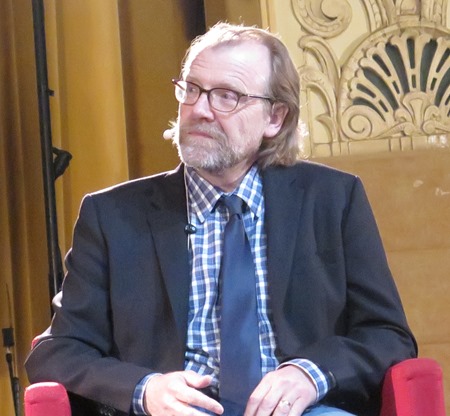 It has been a few years since I last attended a Literary event, the last being in 2015 when I had the pleasure of seeing David Mitchell and Jonathan Lethem.

I’ve never actually been inside Northcote Town Hall before, despite living in the neighbourhood for over 30 years. A grand classical edifice on the outside, the interior features genuine Art Deco motifs – very classy.

The evening took the form of a conversation between noted Australian writer and commentator, Don Watson and the special guest. 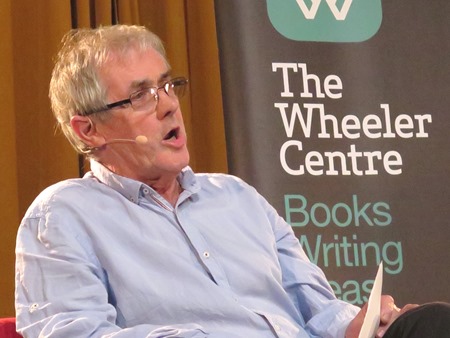 George Saunders came across as a genial chap, interesting and funny.

My ambivalence to his novel Lincoln in the Bardo was turned around after seeing him speak about it.

The novel  is not really suitably set up for reading on a Kindle as I found the layout confusing and at times illegible when the font abruptly changed to italics set at a smaller point. This in turn detracted from the experience of reading the book.

It is undoubtedly a clever novel and passing strange, set as it is in a dead zone – the Bardo - inhabited by an extraordinary collection of ghosts, all with unique voices.

The evening’s discussion naturally centred on Lincoln in the Bardo and also touched on the present state of America under the Trump presidency in contrast to the America of Abraham Lincoln who has been regarded as an American hero throughout the nation’s history. 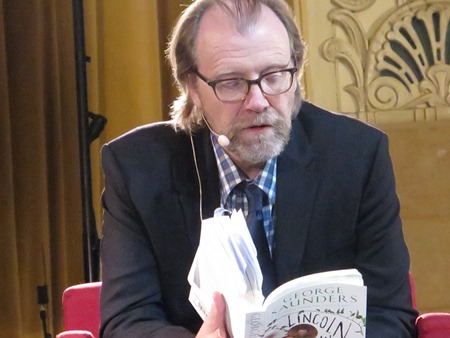 George Saunders reads an excerpt from Lincoln in the Bardo

George Saunders also was asked about his writing methods, to which he responded that rigorous revision was the key ingredient of his development of plot.

He read a short excerpt from Lincoln in the Bardo, including the source references.  Ninety percent of these references are drawn from actual historical snippets, the rest are fictional.  George Saunders would not say which were real or which made up.

It was an illuminating evening and a privilege to see George Saunders in person.

Podcast can be listened to here.

Posted by Anne S at 2:55 pm No comments: Links to this post

But before it really hits Melbourne, I have several interesting events to attend by the end of May, that involve literature and music.

I could include art in that, but I’m holding off on the Vincent Van Gogh exhibition at the National Gallery of Victoria for a month or so, and plan to visit when the crowds have died down.

The Wheeler Centre is having a mini literature festival this May and two of the International writers who will be visiting Melbourne at the time are of interest to me, so I’ve booked tickets to see them at local venue, Northcote Town Hall.

So seeing both these authors soon, George Saunders on 21 May and Colson Whitehead on 24 May, will be interesting to say the least.

I have noted that Irish author Anne Enright is also part of the mini literary carnival, but have eschewed attending her event as I hated her Booker winning novel The Gathering and consequently felt no desire to read any of her other books.

It will be a busy week as far as events are concerned for the long awaited and highly anticipated concert of my all time favourite singer songwriter, Ryan Adams is on 26 May at Margaret Court Arena.

That will be the icing on the cultural cake as far as I’m concerned. 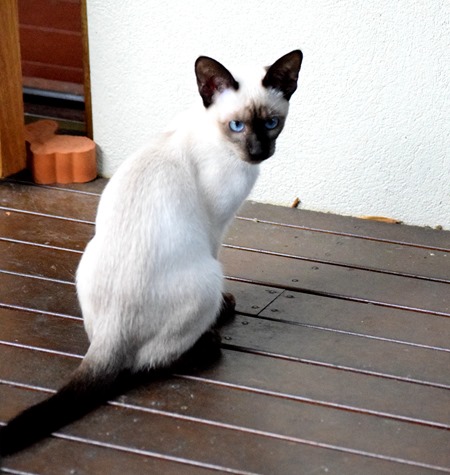 Bingo is now 5 months old and has grown quite a bit since my last report, though is still considerably smaller than the Russian Princess who really finds him annoying, as do we.

The last kitten we had was Willy thirteen years ago, which is sufficient time to forget -  no matter how cute and comical -  how tiresome kitten antics can be at times.

Bingo is full of energy and mischief when he’s not sleeping, and trashes the place in the blink of an eye. Cat toys are scattered throughout the house, some mysteriously missing in action, only to reappear several days later.

He wakes me in the morning, after his breakfast, dumping one of his toys near my head wanting to play fetch. He can be as persistent as those dogs who beg you to throw a ball. Fortunately cats don’t slobber all over their toys, so it’s less unpleasant to pick up the object (a small catnip cushion mostly) and throw it over and over again – as often as he brings it back.

Talya, as previously mentioned, is not feeling any more kindly towards him, and no wonder. Bingo just won’t give up hassling and stalking her and stands his ground when she inevitably reacts violently. 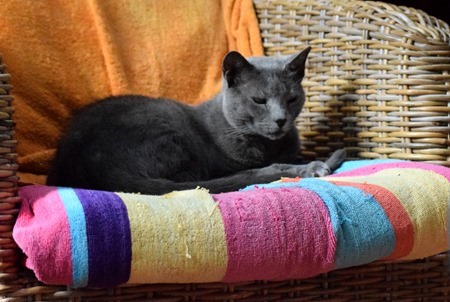 The above photo shows Talya sitting in the cane armchair in the backyard studio, where she retreats during the day to avoid Bingo. That is until he finds her and of course sets about annoying her, jumping on the arm of the chair and climbing over the back to the opposite arm rest, while Talya watches in nervous astonishment.

Bingo has finally worked out the ins and outs of the cat door, though unlike Willy is not insistent on staying outdoors most of the time, seeming to prefer our company indoors.

Of late, one of his endearing, though messy, habits is dragging in dried plane tree leaves and presenting them as a gift, dropping them in your lap as you sit in front of the computer.

He’s still intact so we have to get him desexed in the near future. Perhaps that will moderate his behaviour towards Talya and make him kinder towards her, though I’m not holding my breath on it.