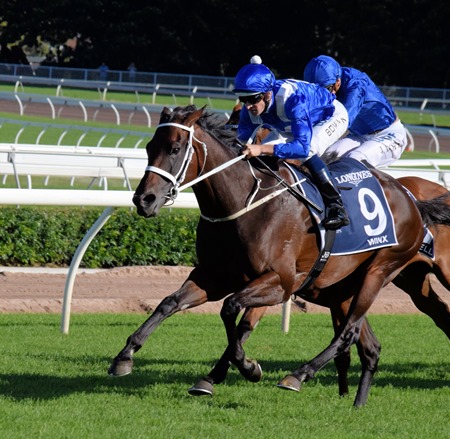 You may well ask was it worth the tedium of waiting around in  airports for delayed flights, the confusion of finding a bus that went to Randwick, and don’t mention Sydney’s Myki Card equivalent Opal when topping it up for the trip back to Sydney Airport.

The best laid plans fall into disarray when the curse of public transport strikes at inopportune times.

I know I should have booked a flight to Sydney an hour or so earlier than I decided on at the time of booking, but them’s the breaks. You have to accept the limitations placed on yourself by a foolish lack of forethought.

Anyway, it was with some relief that I arrived at Randwick Racecourse shortly after 2.00pm, though too late to buy a racebook, which had sold out.

The day was mild and sunny, perfect weather for a day at the races, and I was thankful that I had dressed for a warm day rather than a cool one.

I was in plenty of time to watch the first of the Group 1 races, the Australian Oaks no less, and I found a spot easily on the public lawn up towards the end of the straight to watch and photograph the races, where it was relatively uncrowded.

Taking photos was problematic, however, owing to the double rails surrounding the track in all of the public access lawn areas, so a great many of my photos are cropped to eliminate the rail.

Lasqueti Spirit, as expected, took the lead shortly after the start and drew several lengths ahead of the rest of the field, trying the same trick that won her the Victorian Oaks. But the other jockeys are wise to her habit these days, so the gap closed as they raced up the straight, with New Zealand filly Bonneval demonstrating her obvious class to seize the lead shortly before the finish line, and win by 4.5 lengths from Perfect Rhyme, the first to challenge Lasqueti Spirit, who ended up running third. 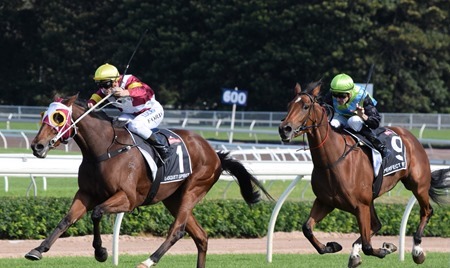 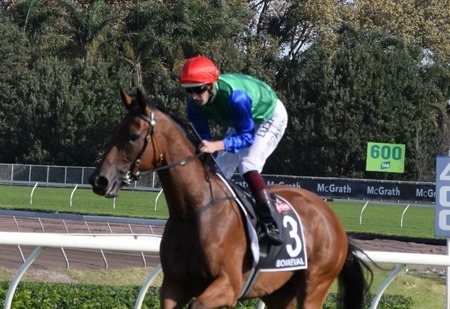 Bonneval on her way to the starting gates

Throughout the afternoon I kept coming across groups of young men who all wanted their photo taken.

As this group were pleasant young guys, I promised I’d put the following photo on my blog for Jake, Vaughan, Eric, Donald, Kieran & Craig to download. Who knows who is who and one is missing from the photo. 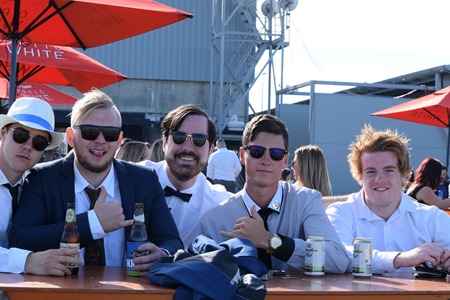 As I had been unable to buy a racebook, I thought I’d do a cruise through the crowds and see if I could find an abandoned book. I ended up with three at the end of the afternoon.  I was also keen to get a Winx flag or two, and they were easy to find lying abandoned on the ground all over the place and remarkably hadn’t been trampled.

A note on the racebooks; they were a very shoddy production with the ink on the cover rubbing off with little use and the interior falling apart if stressed too much.  Obviously the ATC save money on racebooks to pump into the ridiculously high prize money of The Championships.

Speaking of Winx, the only reason I was at Randwick, her race, the Queen Elizabeth Stakes was next to run.

As races in Sydney are run clockwise there were no opportunities from where I was standing to photograph the runners heading to the barriers.

I commandeered a chair to stand on to give me a rail free view of the field as they turned the corner into the straight. 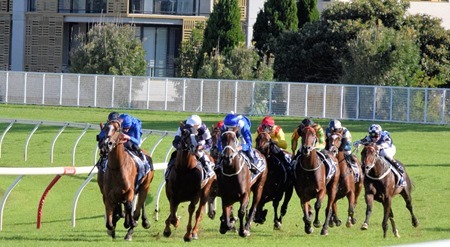 The QE Stakes field turns for the home straight – Winx is about to overtake Hartnell who leads at this point.

Winx of course won easily, relegating Hartnell once more to second place by a margin of 5.3  lengths, with Special Occasion running third.

Winx steams away down the straight leaving Hartnell & The United States in her wake. 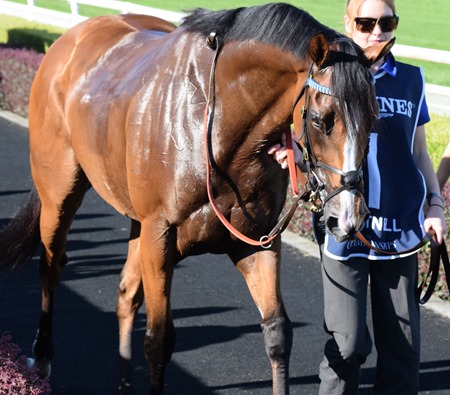 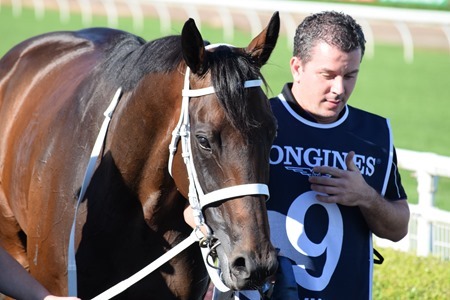 Winx returns to the stalls after her 17th successive win

The Sydney Cup ended up being called a non race after Almoonqith broke down shortly after passing the finishing post for the first time.

His fall upset Who Shot Thebarman, who dislodged his jockey and raced riderless, doing two laps of the course before being caught.

I am glad that I was far away from this accident and didn’t witness it, but I was aware that something had happened as the field turned into the straight and only half the field appeared to be fighting out the finish with the riderless Who Shot Thebarman among them, and the remainder tailing in cautiously at walking pace.

Unfortunately Almoonqith was euthanised, but Who Shot Thebarman survived unhurt. 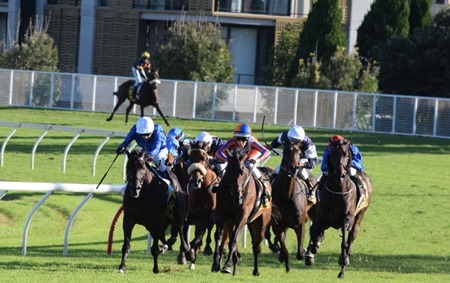 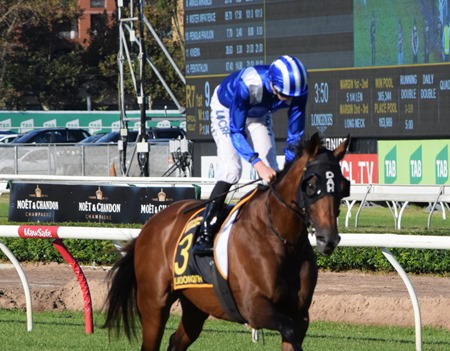 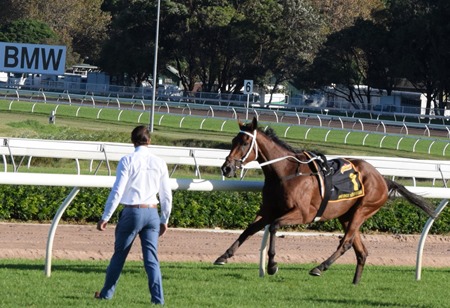 A track hand tries to stop Who Shot Thebarman as he careers down the straight.

As there were several hours to go before I had to head back to the airport, I stayed for the final Group 1 race of the afternoon. This was the Coolmore Legacy Stakes.

I’m glad I remained as the news came yesterday that First Seal (one of the few horses to have beaten Winx) has been retired, and she was one of the mares I was looking forward to seeing again. So I’m pleased I got the opportunity to photograph her one last time. 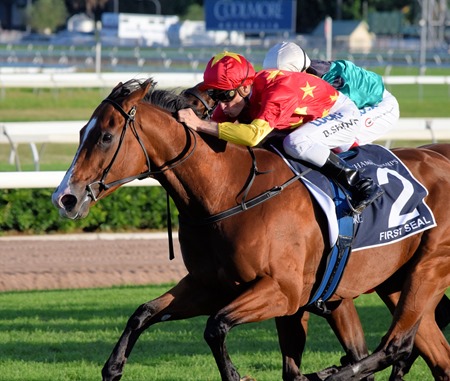 First Seal – leading the Legacy Stakes field down the straight

The Legacy Stakes field turn into the straight

I did not stay for the last race and made it back to Central Station, exiting Randwick Racecourse straight onto the express bus.

Admittedly I was a bit vague on the uses of the Opal travel card, even though it is similar to Melbourne’s Myki Card which I have been using for years.

There was no way to buy a ticket back to airport over the counter at Central Station. You had to queue up at a machine to top up. Silly me didn’t take a debit or credit card with me to Sydney, so I had to top up with cash. The first machine wouldn’t accept notes, only coins, so I had to find somewhere that could change $20.00 into coins, and succeeded in doing that.

Finally, after a lot stuffing round I had the Opal card topped up with sufficient funds to get me to the airport.

It was a long wait at the airport for my flight which was scheduled to take off at 8.25pm. However, a storm in Melbourne delayed the arrival of the plane I was supposed to catch, and the time for take off was moved to 9.00pm.  Sigh...

Luckily I had my Kindle and got through a good half of the book I was reading before the flight finally departed Sydney Airport.

I eventually got home at 12.45am, catching the Skybus from Melbourne Airport to Southern Cross Station, from where I trammed it the rest of the way.

Compared with the Spring Racing Carnival in Melbourne where crowd numbers are huge, Randwick didn’t seem all that packed. It was a bigger course than Rosehill but not a patch on the wide open rose enhanced spaces of Flemington.

I wasn’t impressed with the so called “Theatre of the Horse” it reminding me of the mounting yard at Moonee Valley, which I generally give a miss, preferring to observe the runners in the parade ring. It’s like an ampitheatre with tiered rows descending to ground level – vertiginous.

Anyway, despite the transport hiccups, it was an interesting and out of the ordinary day at the races and I’m glad I went, even if I don’t think I’d repeat the experience without plenty of forethought.

And it was a thrill to see Winx win her 17th race in succession and 12th Group 1. She appears unbeatable and her winning a third Cox Plate come Spring is practically a foregone conclusion.  Kingston Town is the only horse to have accomplished this in its 95 year history, and Winx will join the greats, if she hasn’t already,  of Australian Racing History and be long remembered into the future.

As a racing fan I count myself lucky to have seen several great racing mares, particularly Sunline, Makybe Diva, Black Caviar and Winx all in the space of the last 20 years.