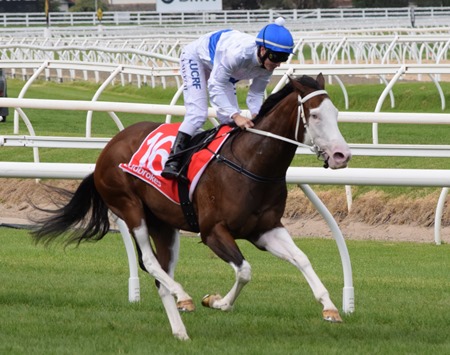 Ostensibly I went along to the Easter Cup race meeting at Caulfield on Saturday for acclaimed race caller, Greg Miles, farewell and final call, and also to touch base with Rebecca, my photographer friend, to give her the booty I managed to score at Randwick, i.e. Winx flags and race books.

It turned out to be surprisingly interesting afternoon at the races, where several runners whom I vaguely follow were running in one or other of the races scheduled on the big 10 race program.

I intended to arrive in time to catch Race 3, and managed to do so despite just missing a train that would have got me there earlier.

The unusually marked and distinctive Miss Vista, a crowd favourite, and one of the horses I had come to see, was the star attraction in Race 3, the Bert Bryant Handicap, a race over 1000 metres.

Miss Vista, now a four year old mare, romped home to score a narrow win over the fast finishing Grey Street and Chase The Horizon. That was her fourth win in five starts. 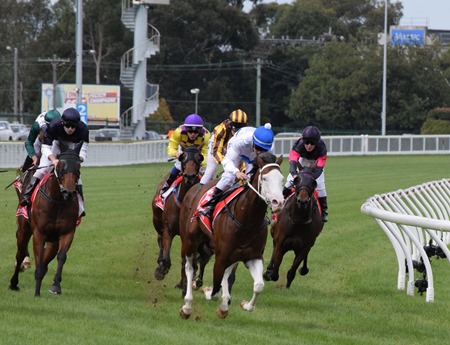 Miss Vista turns the corner after the finishing post after winning the Bert Bryant Handicap. 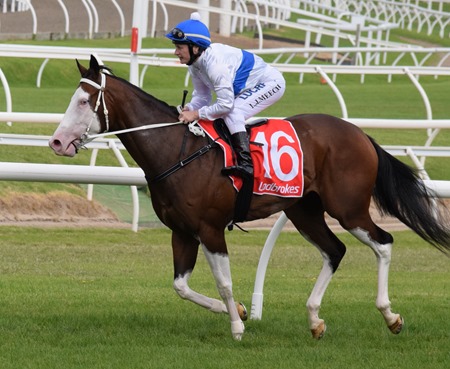 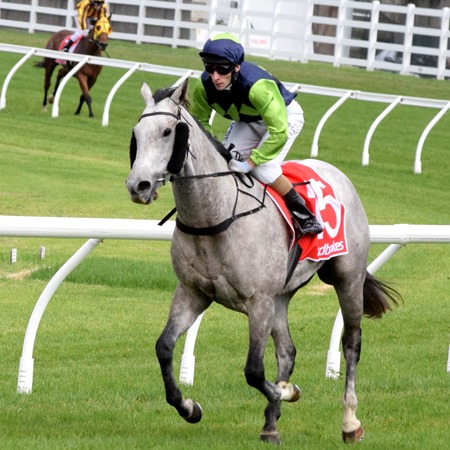 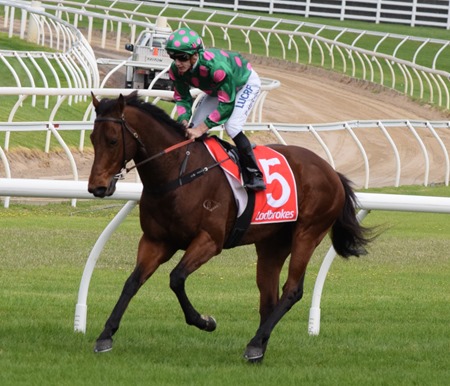 Chase The Horizon returns to scale

The above photos were taken from my preferred spot on the hill above the stalls area, but I thought I’d give the public lawn another go for Race 4, the Spicer Thoroughbreds Handicap, a 1400 metres race for three year olds.

Despite the hedge being clipped, I still was unable to get a clear shot over the fence, so my photos from that position were a dismal failure.

The race resulted in a dead heat for first between Plenty To Like and Waterloo Sunset, with So Poysed running third.

So it was back to the hill for the rest of the afternoon.

In the Geoff Murphy Handicap, race 5 on the program, I was interested to see how Merriest would go. I’d seen her defeat the highly regarded WA filly Whispering Brook in the Atlantic Jewel Stakes at Moonee Valley last September and thought she looked promising then. 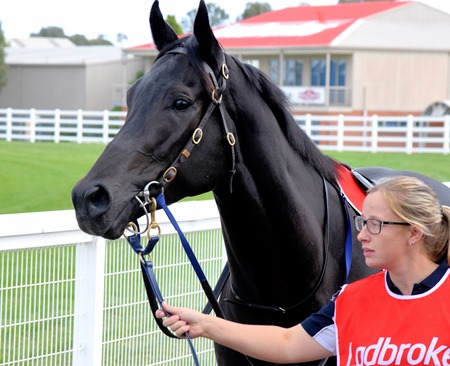 She justified the promise with a good win in the Geoff Murphy Handicap overtaking raceleader Snitty Kitty to win by half a length.  Selenia ran third. 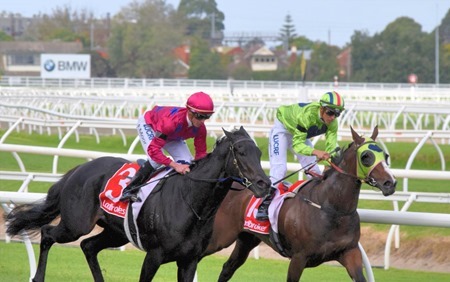 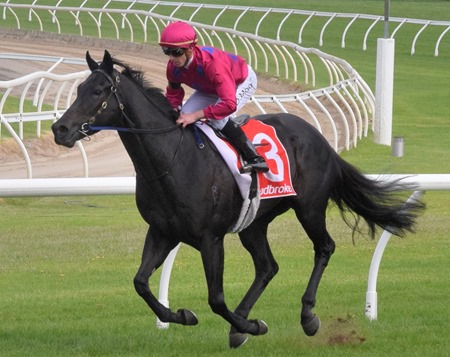 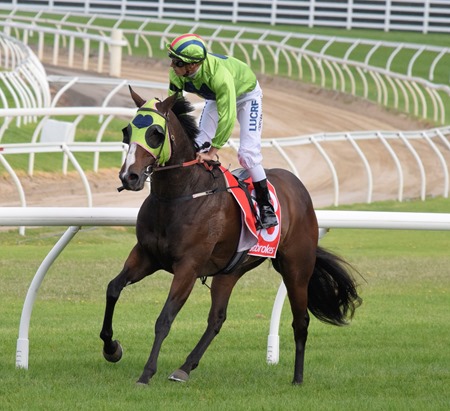 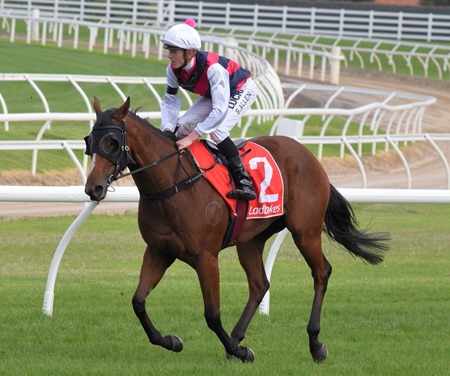 Run over 2425 metres, race 6, the Robert Taranto Handicap was dominated by Boom Time who led from the start to the finish and was never headed. He won by 2¼ lengths from De Little Engine and Hans Holbein.

Boom Time is certainly a good stayer, and is entered to run in the rescheduled Sydney Cup next Saturday. 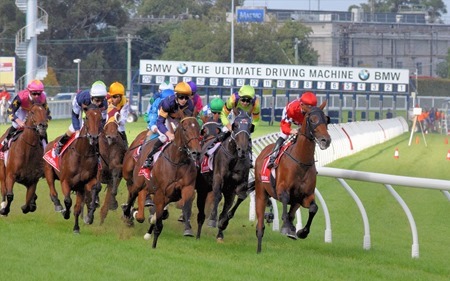 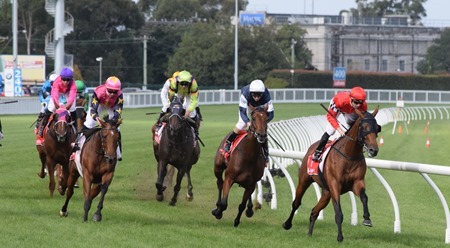 Just past the post at the finish – Boom Time still leads 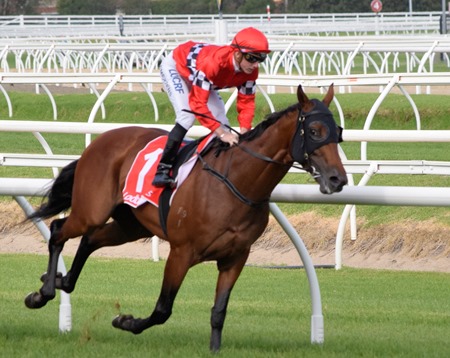 Both Rebecca and I were interested to see Miss Gunpowder in the next race, the M&D Dillon Constructions Handicap, a sprint over 1200 metres. She has recently changed trainers, formerly with Adelaide trainer Phillip Stokes, and now with David Hayes and Tom Dabernig.

The change has obviously done her good, though in the past she has acquitted herself well against some classy fillies, including Jameka.

This race was an open handicap and Miss Gunpowder started as second favourite. She won the race comfortably by ¾ length from race leader Boomwaa, with Heza Ripper running third. 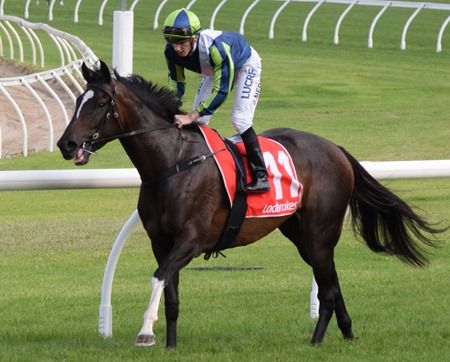 The feature race of the day was the Group 3 Easter Cup, scheduled as race 9, so there was one more race to be run before it was due.

This was the Group 3 My Punter Com Victoria Handicap, a race over 1400 metres.

It had a good field that included former European stallion Arod, Charmed Harmony and Hooked, for whom I have a soft spot after winning some money on him on Cox Plate Day 2014.

Hooked hadn’t won a race since September 2015, so it was pleasing to see him take out the Victoria Handicap, fighting out a close finish with Charmed Harmony, with Turbo Miss third 2.7 lengths behind them. 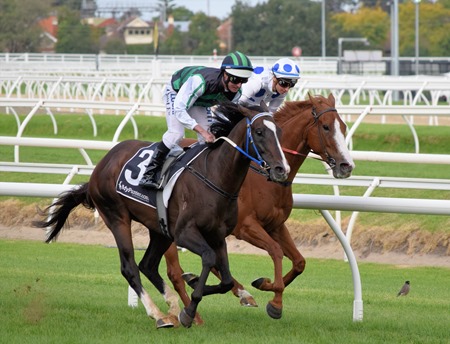 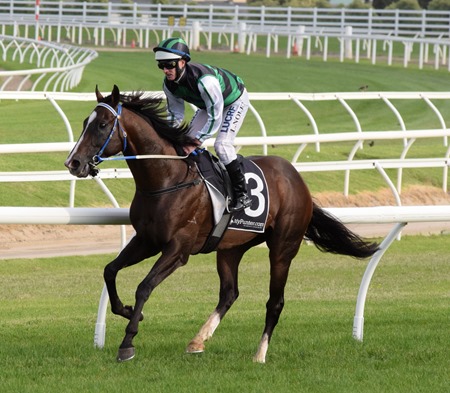 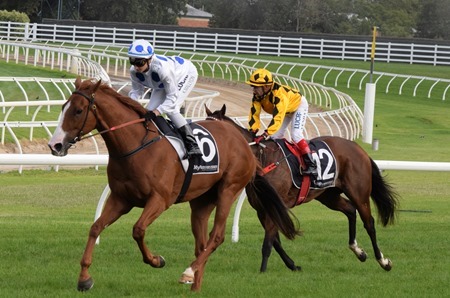 Throughout the afternoon, the familiar voice of Greg Miles calling half the meeting, alternating with new race caller Matt Hill, reminded us that Greg was quitting on that day. He was a great race caller, easy to hear and distinct in anunciation. Races were described accurately and in detail, and you knew where each horse was running. I was however impressed with his replacement, Matt Hill,  who’ll obviously fill Greg Miles shoes without any worries on the part of the listener.

At last it was time for the Easter Cup.

By which time, the afternoon was drawing in, the light becoming unsuitable for photographs, not to mention getting chilly at the end of a pleasantly mild, slightly overcast day.

Run over 2000 metres, the Easter Cup was won by Observational from Second Bullet and Double Bluff. 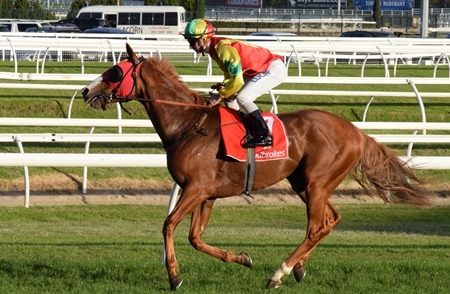 I didn’t stay for the last race, named in honour of Greg Miles, Bravo Greg Miles, and thus missed the official farewell, which would probably have dragged on for ages.

Next weekend the Sydney Cup will be rerun at Randwick. Let’s hope it runs without mishap this time.

As for my Saturday afternoons at the races, it is now the off season and I won’t be attending many between now and springtime.