Reasons To Be Cheerful

Global power may currently be in the hands of a scary three year old in the body of a grown man, a sinister former member of the KGB and an ambitious inscrutable oriental power,  but I try not to let that bother me overmuch.

What can you do?

My answer is to find things that make you cheerful and take your mind off the dire new world – world war three  will happen, or then again, it may not.

I have several pleasant things to look forward to in books, music and horse racing. 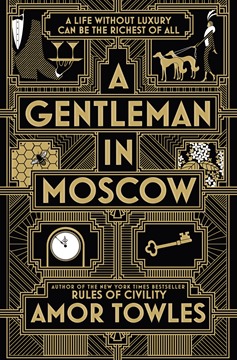 Firstly, books.  I was pretty underwhelmed by the literature on offer at the start of 2016, but I did find some gems published last year after it was almost over.

I’m currently reading A Gentleman In Moscow by American writer Amor Towles, an author unfamiliar to me, even though he has one other novel, The Rules of Civility, published in 2011.

A Gentleman In Moscow is a real find; a charming and thoroughly enjoyable novel set in Moscow, covering the years 1922 through to the 1950s.

Though  the novel is set in Moscow in the period following the Russian Revolution,  it is mostly confined to the grand old Hotel Metropol where the novel’s protagonist, Count Alexander Rostov, is detained under house arrest.

It’s a novel to be enjoyed for its elegant and witty prose style, rather than page turning action.  However, there is plenty to keep the reader amused and beguiled as Count Rostov settles into his prison and adapts to its limitations. He’s a likeable character, a man with good taste and manners -  a true gentleman- who enjoys the good things life has to offer in his confinement, and treasures the friends he makes along the way.

Events outside the Metropol are not ignored; the tumultuous events of post revolutionary Russia  intrude on the charmed lives of the Hotel Metropol residents every so often.

Other 2016 published novels I was taken with are Margaret Atwood’s wicked take on Shakespeare’s The Tempest Hagseed, and Moonglow, a fictional biography by Michael Chabon, wonderfully written as you’d expect. I also read some super short story collections, Joan Aiken’s The People In The Castle, Get In Trouble by Kelly Link and Children of The New World by Alexander Weinstein.

This year’s fiction offerings are far more promising with novels by favourite authors Neal Stephenson (The Rise and Fall of D.O.D.O), Nick Harkaway (Gnomen), Phillip Pullman (The Book of Dust) and John Crowley (Ka: Dar Oakley in the Ruin of Ymr)  all to be published this year.

As for music, I have three concerts to attend in the next few months, with the Dixie Chicks on April 2 at Rod Laver Arena. My all time favourite artist Ryan Adams will be performing live in May at Margaret Court Arena. In July I’m off to see America, the 1970s band, best known for the song “Horse With No Name”, at Hamer Hall.

Having been awed by the amazing performance of Winx in the George Ryder Stakes last weekend, I had an overwhelming urge to go and see her in her final race for autumn, in three weeks time at Randwick, in the Queen Elizabeth Stakes. I have decided to fly to Sydney for the day and have booked my flight and purchased a ticket to the event, which also covers public transport fares to Randwick Racecourse.  So a sort of mini adventure is on the cards for Saturday 8 April. I don’t care what the weather is like – rain or shine will suit me either way.

Rebecca, if you’re reading this, I can get you a race book (can’t promise to get it signed, but I’ll try) and hopefully a Winx flag. Send me an email at pollycatster@gmail.com if interested.

If you’re wondering at my folly, check out this video of Winx winning the 2017 George Ryder Stakes last Saturday.  Be mindful that the track was a heavy 10 (Heaviest category track, very wet, towards saturation). All the racing fraternity are lost for words at her latest win, but I can’t help but rejoice that a racehorse of her calibre is back with us again so soon after Black Caviar stole our hearts away.