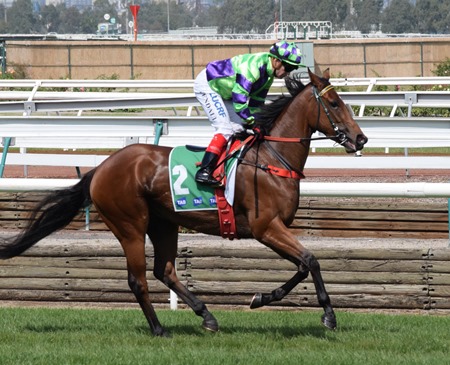 I Am A Star – can she emulate Sunline and win the Doncaster Handicap at her tender age?

Doncaster – Derby Day at Randwick is one of the great days on the Australian racing calendar.  A few years back the two main events were run on different Saturdays, but these days they are featured along with the T J Smith Stakes and the Inglis Sires.

There’s something for everyone – a first class sprint (T J Smith), a race for two year olds (Sires), a middle distance nail biter (Doncaster Mile) won by many champions in the past, most recently by wonder mare Winx, and the ATC Derby for three year old stayers.

The first to run is the Inglis Sires, which is run over 1400 metres, where a full field of 16 runners have accepted. Quite a few of the contestants ran in the Golden Slipper with varying results. Slipper winner She Will Reign is not in the field, but the runner up Frolic and third placed Tulip are top chances.

Melbourne based horses have been very successful in Sydney this autumn season, so they could dominate again, for instance Sircconi who won the Group 2 VRC Sires Produce Stakes at his last start.

New Zealanders are often successful during the Sydney autumn racing season, so it would be unwise to ignore Summer Passage, who won a Group 1 race in New Zealand at his last start.

Two New Zealand stayers are entered in the ATC Derby, Gingernuts and Jon Snow, both recent winners in Sydney, the former winning the Group 1 Rosehill Guineas, the latter victorious in the Group 2 Tulloch Stakes. Both have competed against each other across the Tasman with Gingernuts getting the better of Jon Snow in the New Zealand Derby.

Of the locals Prized Icon, Inference, Anaheim and So Si Bon have the best chance of defeating the Kiwis.

The grey flash Chautauqua has a chance to redeem his reputation and make history by winning the T J Smith Stakes for the third time in succession, a feat never before accomplished in its twenty years of running.

He’s sort of back to his old self, and back to his favourite distance of 1200 metres after finishing a distant third in the George Ryder Stakes which of course was won by Winx.

As previously mentioned the Doncaster Handicap is a race for champions. You aren’t anyone in the annals of middle distance racing until you’ve won it. You only have to look at the list of previous winners to see what a prestigious race it is. Sunline won it twice as did Super Impose and Sacred Falls. Other top class milers who’ve won it are More Joyous, Haradasun, Private Steer and of course Winx.

This year’s edition has a super field with a good mix of quality milers and three year old aspirants. Of the older contestants, the top chances are Le Romain, Redkirk Warrior, Tosen Stardom, Happy Clapper and Palentino, whilst talented youngsters like I Am A Star and Hey Doc might well challenge their elders, having a weight advantage in the handicap conditions and with a bit of luck in the running.

For a change the Randwick track may not be as heavy as the recent Rosehill race meetings, with little rain falling this week in Sydney. It might even make it the better side of slow, though the aftermath of Cyclone Debbie that devastated North Queensland looks to be headed south and may rain on Sydney’s parade.

The undoubted star of the day was the grey flash Chautauqua, winning the T J Smith Stakes with a stunning finishing sprint from a no win position. We’ve see it all before, so it was great to witness the big grey back to his best and make history into the bargain, becoming the first horse to win the T J Smith three years in succession. He won by a neck to English, with Fell Swoop running third not far behind.

Favourites failed to feature in all the Group 1 events of the afternoon, even Chautauqua paying $6.00, unheard of odds a year ago.

The Inglis Sires trifecta was taken out by the boys and the highly fancied fillies were missing in action. Invader won, upstaging New Zealand colt Summer Passage and Trapeze Artist ran third.

And the Doncaster Mile was taken out by 40/1 shot It’s Somewhat who beat Happy Clapper with 50/1 longshot, Sense of Occasion running third.

Next week is the Group 1 Sydney Cup, Queen Elizabeth Stakes, Australian Oaks and Queen of the Turf Stakes, which, god willing, I will be present to witness in person.