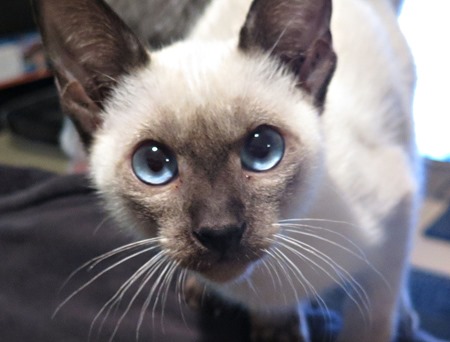 It is now the fifth day that Bingo has been living with us and we’ve got to know him better, and he, us.

As I write he is asleep under the bed covers, the weather in Melbourne having turned decidedly nippy over the past two days.  This is a change as he’d normally be pestering me for attention, but then again he’s probably digesting the chicken neck he devoured for breakfast.

There’s certainly nothing wrong with his appetite; in fact he’s voracious. He’ll eat practically anything we feed him – tinned food, raw meat and zucchinis. The only food he shows no interest in eating is dried cat food, which to my mind is a good thing.

Willy was addicted to dried cat food and you had to give him a handful with his normal food to get him started. This addiction I think was what caused him to gain so much weight as he grew older and could well  have contributed to the illness that ended his life.

One of the vets at the Northcote Veterinary Surgery told us about feeding cats zucchini, to control the weight of excessively hungry cats. It is calorie free and fibre rich, so cats can eat as much of it as they want without gaining weight.

So I’ve started Bingo early on zucchini, and he eats it straight without me having to mix it with other food.

As for the cat political situation with Talya, it appears to be settling down into some kind of acceptance. Last night Bingo pranced past her – at a distance – without blood being spilt. She hopefully realises that he’s not a threat. He is very small after all.

She has been very aggrieved by his arrival and refused to talk to us for several days, but she is showing a softening of attitude.

It’s still too early to tell how it will all turn out, but there are promising signs that a detente between the cats will eventually be reached.

His little cat face is saying that he still isn't sure what is going on here.
Because I once crunched by mistake on a piece of dry catfood I can tell you they are 100% SALT. Bingo is a smart boy.

He's actually saying "Why are you pointing that thing at me". He has us figured and will soon be running the house.