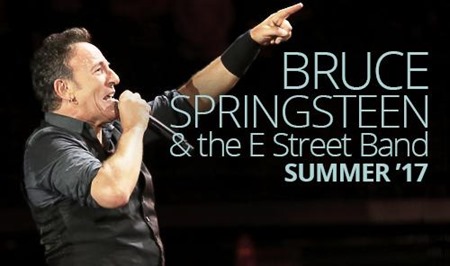 Last night (4/2/17) I had the thrill of seeing Bruce Springsteen and the E Street Band perform live in Melbourne.

The venue, the relatively new AAMI Park, is one I have not been to before, but is a football stadium (soccer and rugby) that is also used as a live music venue every so often.  It has a distinctive rectangular design and the roof, that partially covers the arena, looks like a bunch of soccer balls loaded one on top each other, shrouds the structure.

The concert began in broad daylight (doors opened at 4.00pm) with two support acts entertaining the early arrivals, before Bruce Springsteen kicked off his show at around 7.45pm.

As we had reserved seats, we took our time getting there, dining first at the Corner Hotel in Swan Street, Richmond.

From there is was only a short walk to the stadium in Olympic Boulevard, and we caught some of support act, Jet’s show, from our seats on the floor, a fair way back from the stage.

Cameras were forbidden so I didn’t mind being at a remove,  watching the show on the big screens, to the left and right and above centre stage.

Bruce Springsteen is renowned as one of the best live acts in the world, and I can appreciate why. He was indefatigable, practically playing non stop over three hours, ably supported by the wonderful E Street Band who comprised:

Springsteen is adored by his fans and he reciprocates the devotion warmly, interacting personally with them, shaking hands and allowing certain lucky fans to climb on stage for a five minutes of fame song and/or dance.  Banners seem to be the go if you’re down the front in mosh pit; the camera catching the signs requesting songs, or wishes to sing or dance with Bruce and the band.

It was high powered set encompassing 27 songs, with rockers and slower ballads in the mix.

As daylight faded to night, above the open air arena you could see fruit bats flying over and white birds wheeling above. And towards the end of the show fireworks were detonated off to the side outside the arena with sparks and streaks of light appearing above the top edge of the stadium.

As this was the first time I’d seen Bruce Springsteen live, I was impressed and enjoyed hearing old classics such as Born To Run, Dancing In The Dark , Hungry Heart, Glory Days in person.

3. My Love Will Not Let You Down

4. Out in the Street

14. Death to My Hometown

ooeee! CatPol I am so happy for you. Bruce Thrillsteen. not called The Boss for nothing. He is clearly aware that his wealth comes from the adoring thousands out in the stadium and gives back the love. I can remember how exciting it was to hear that first play of his earliest albums. Went to see his first ever West Coast gig in 76 or 77 at Santa Monica Civic Auditorium and he was supporting Dr John. Had Row D tickets and god it was LOUD. powerful visceral loud.
We love you Bruce. I hope your happy buzz lasts for weeks.

One of the early E Street Band videoclips has Courtney 'Friends' Cox as the 'lucky' girl pulled out of the mosh pit [obviously a fix by her agent].
Did you mention Patti Scialfa? now I have to read again ...

Annie, Lucky you seeing The Boss so early in the piece, his "glory days" so to speak. I too had his early records, but never got around to seeing him live until now.

He looked in good nick for his age. Patti Scialfa could have been part of the band - there were a lot of them - but I was too far away to get a good look at the band personnel, having to rely on what the screen chose to show.