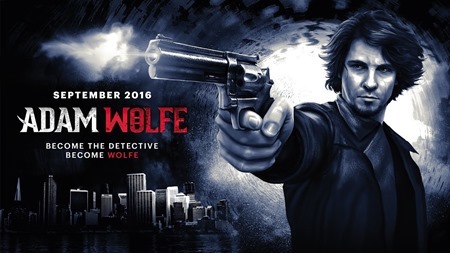 I’ve mentioned before that I’m a fan of computer games and I generally have one on the go most of the time, to fill in the lazy hours of leisure that is part and parcel with being retired from work.

My preference is for Adventure games, but occasionally I will play hidden object games (HOGS) when I run out of good adventures, or feel like something new.

A great many HOGS are the same old stuff, fantasy or supernatural horror – take your pick - and are generally amusing to play if you like solving puzzles. But it often seems that you’re playing the same game over and over again,  the titles all vanishing from your mind as soon as you finish playing.

So I was pleasantly surprised when I came across a HOG called Adam Wolfe, the brain child of Mad Head Games, and started to play the first episode and was blown away by its originality.

It’s like no other hidden object game I’ve ever played, being more of an action adventure interactive movie that sweeps you into its world from the get go.

The game is set in a dystopian San Francisco and you play Adam Wolfe, paranormal detective, who is seeking his missing younger sister Allie, who disappeared two years before the story opens.

Adam’s search takes him to some dark places and pits him against evil sects and time lords over four episodes. It’s a fast moving game, and very engaging to play.

You are sucked in and become involved in no time flat. There are puzzles to solve and hidden object scenes that integrate smoothly with the story line. You even get to shoot a gun and fight with the baddies every so often – unencountered in other HOGS!

The graphics are beautifully rendered and the sound (an essential component) is suitably edgy and moody. Plot driven, the story is interesting and unpredictable.

Scene from the game

I’ve played all four episodes and I must say it has been a while since I  enjoyed a game as much, and a HOG at that. I didn’t want it to end and plan to play the game again shortly.