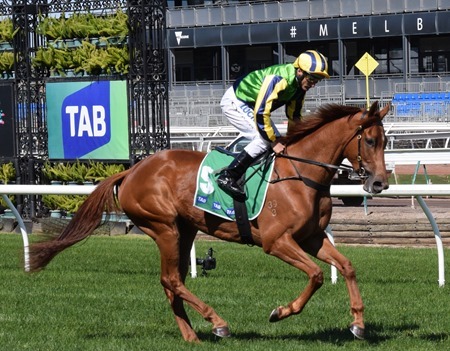 With the Melbourne Cup being run and won, it’s time to turn our attention to the next Group 1 race in the Spring Racing Carnival, the Crown Oaks, for three year old staying fillies run over 2500 metres.

With my calf muscle now back in walking order I intend to go to the Oaks meeting at Flemington tomorrow, ostensibly for the feature event as two of my favourite fillies will be competing in the event.

Yankee Rose will understandably start as favourite, her earlier exploits in classy company making her the top pick.  Her win in the Group 1 Spring Champion Stakes against the boys, including Victoria Derby winner Prized Icon, marked her as a filly of extraordinary ability. Her third placing in the Cox Plate was also full of merit.

I’m very torn between Yankee Rose and her main competitor in the Crown Oaks, Eleonora, and can see either of them winning.

Eleonora has the superior breeding for the race distance and her win in the Group 3 Ethereal Stakes, where she beat subsequent Wakeful Stakes winner Tiamo Grace, was impressive. Tiamo Grace is not in the Oaks field, but Wakeful Stakes runner up, Sebring Dream is, so too the third placed Missrock.

Others with a chance are Harlow Gold and Smart As You Think.

The Oaks is scheduled as race 8  and run at 5.00pm tomorrow, so I’ll be taking my time getting to Flemington, but envisage arriving around 2.30 pm.

Last year a wild storm swept through Flemington early in the afternoon, but the weather this year is forecast to be mild and sunny.

The Flemington mini carnival finale is on Saturday and features the final two Group 1 races of the Melbourne spring racing season, and much as I would like to be there, I am unable to attend due to a commitment to attend a birthday party in Beechworth, a small interesting town in North East Victoria.

So Oaks Day is my last chance to attend a Group 1 race meeting this year.

On the subject of mares and fillies, it was disappointing to learn that Lucia Valentina has been retired, so I’m glad I got to see her twice this Spring. She apparently has a sesamoid injury which precludes her from racing again. She’ll be mated to Fastnet Rock, so we can look forward to seeing her sons and daughters hitting the track in the future.

Though I was also disappointed that Jameka didn’t feature in the Melbourne Cup finish it was obvious that she could not run the 3200 metres. Nick Hall’s ride was spot on again and she was primed at the right time to sprint home, but she faded to finish 15th.

An interesting point that arose from the Melbourne Cup result was that Almandin’s sire, the German stallion Monsun had bred his third Melbourne Cup winner, the others being Protectionist in 2014 and Fiorente in 2013.  That’s something to look for in analysing the runners in future Melbourne Cups. Though Monsun passed away in 2012 his influence could possibly continue with his sons and daughters at stud like the great Sir Tristram and Zabeel in New Zealand.