The Wind & the Rain and WINX– Wow Again 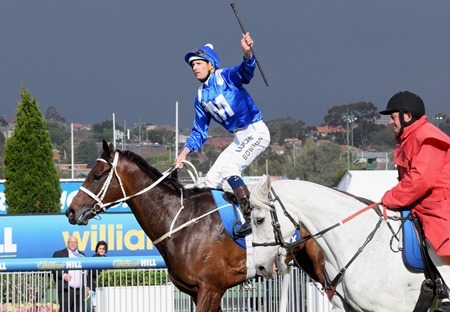 The failure of top sprinter Chautauqua to run a place in Friday night’s Manikato Stakes left me feeling deflated; my high expectations for him to win with his usual last to first dash were disappointed.

The Manikato Stakes was taken out by 60/1 shot Rebel Dane, a shock result for everyone, with Fell Swoop running a very close second, and Japonisme a length back stealing into third place. Chautauqua failed to fire and finished seventh. As his jockey remarked he is not the same horse that took out the Chairman’s Sprint back in May.  He will not continue with his spring campaign and has been spelled. I hope there is nothing wrong with him and that we’ll see him again in autumn.

We will not see old trooper Buffering again as his connections have decided to retire him. He was grand old sprinter who competed against the best in the land and overseas, including Black Caviar, and himself won seven Group 1 races. His last win was in Dubai in the Group 1 Al Quoz Sprint earlier this year. He will join The Cleaner and all the other wonderful old champs at Living Legends.

On to the Cox Plate…

Weather wise, it couldn’t have been a worse day to go to the races.
A cold wind and frequent showers of rain persisted from morning to night. The temperature barely reached 13°C and was probably a lot colder than that with the wind chill factor.

The race meeting at Moonee Valley seemed as if was being held in winter rather than spring and was reported as being the coldest Cox Plate meeting in 46 years.

That was not enough to put me off attending, so I braved the elements and headed for the bus stop around 12.30pm in plenty of time to board the 12.50pm bus.

Sounds simple enough, but all my careful planning was put in disarray when the bus failed to stop for me. The Moonee Ponds Busline curse had struck again! I had to wait for the next one and decided to kill the time by walking to Clifton Hill Station and catching the bus there.

I finally arrived at Moonee Valley shortly after 2.00pm and, after purchasing a race book,  wandered out to the stalls area to see who had arrived. 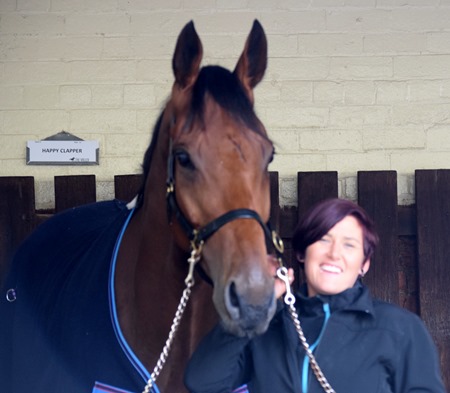 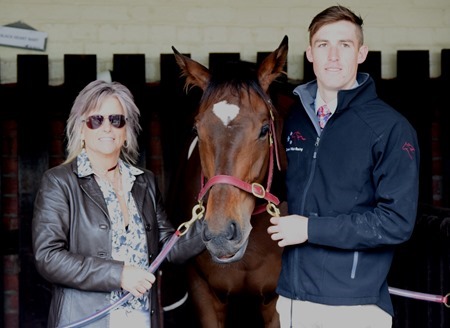 Winx was not in her stall, but I discovered her being walked in the parade ring… 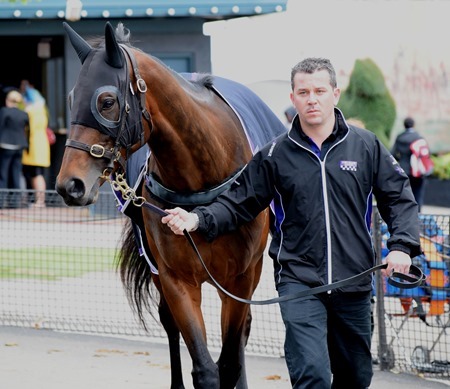 Winx in the parade ring

… and Yankee Rose was there as well. 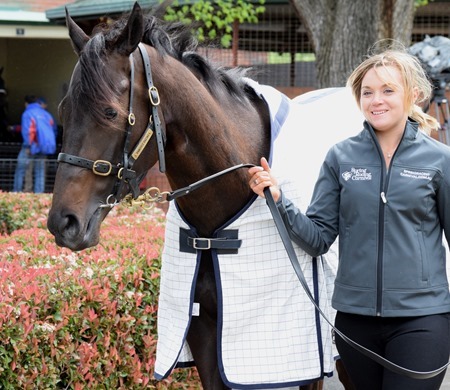 Yankee Rose with her cheerful strapper in the parade ring

The weather was challenging for photography, and when reviewing my photos some were too over exposed (too bright) and others were under exposed (dark) just like the rapid changes in the weather - sunny one minute, then raining the next.

However, I am not going to complain about the weather as the upside was that the crowds were down in number, and fled the public lawn every time it rained, so it was easy to get a good position on the fence if you didn’t mind getting a bit wet.

With forethought I had purchased, for the princely sum of $4.00, an emergency poncho. Certainly not haute couture, it looked like a white garbage bag with holes for your arms and came equipped with a hood. It may have looked ridiculous but it kept me and my camera dry.

You may wonder why I didn’t take an umbrella, but I loathe carrying them around, and like to keep my hands free.

Imagine my surprise when watching SBS News on Saturday night and seeing myself on TV wrestling with my emergency poncho in the wind when trying to put it on. I managed to save the screen print below from the video. 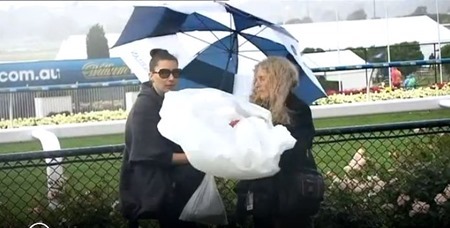 Shortly after the above footage was shot, race 6, the Fillies Classic was set to run, so I gave the camera a test run when the fillies moved onto the track and snapped them as they came around the corner into the straight.

Fillies Classic down the straight

It was won by the oddly named Nurse Kitchen, who I admit I had never heard of. She’d only had a few starts previously but surprised even Greg Miles the race caller with her flashing run down the outside to pip race favourite Sezanne at the post at the last minute. I Am A Star ran third. 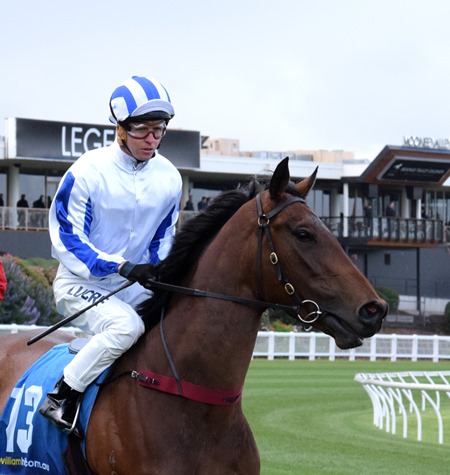 .
Nurse Kitchen on her way to the barriers

The Cox Plate was scheduled as race 9 on the program, so there were two other races to watch before the big one.

Remarkably, despite the frequent showers of occasionally horizontal rain, it cleared when the races were on.

Back in the stalls area more Cox Plate contenders had arrived and were either in their stalls or in the parade ring. 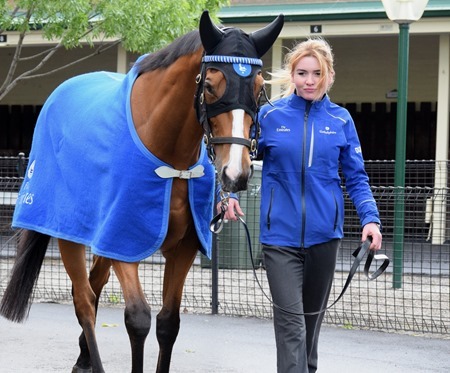 Hartnell in the parade ring 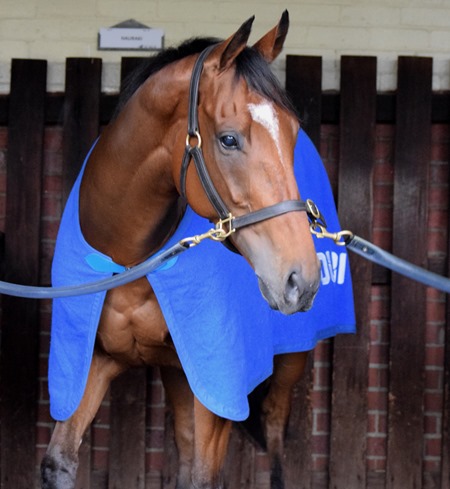 Hauraki in his stall 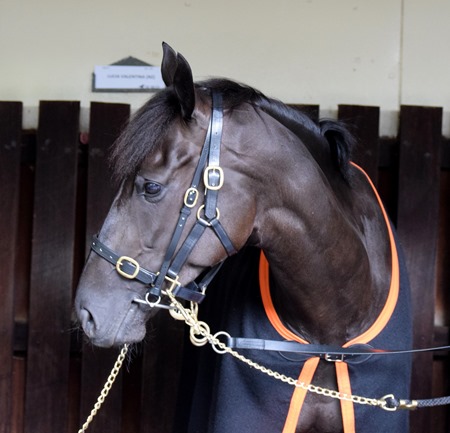 Lucia Valentina in her stall

Also out and about in the stalls area, was two time (2003/2006) Cox Plate winner Fields of Omagh the special guest from Living Legends. 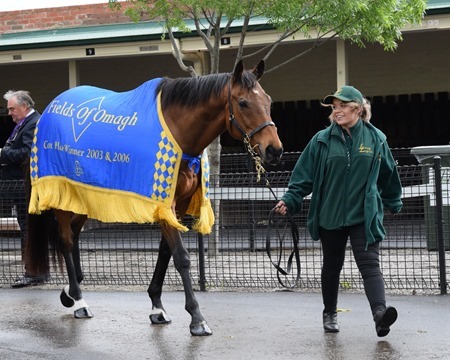 Fields of Omagh in the parade ring

Race 7 was the Crystal Mile, so I returned trackside to watch it.

The Lloyd Williams owned The United States was making a delayed start to his spring campaign in this race and successfully held off Lidari and Ulmann to win by a length. 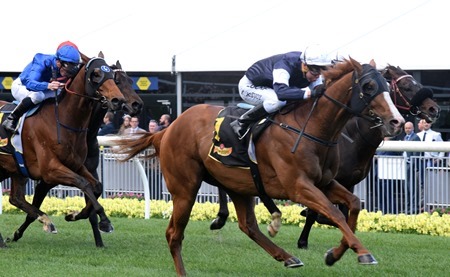 With the penultimate race before the Cox Plate being the Moonee Valley Gold Cup, I decided it was timely to grab a possie on the fence as near to the finishing post as possible and reconnected with Rebecca who I’d lost sight of for the past hour and who had snaffled a good spot on the fence in the meantime.

And there we stayed for the remainder of the afternoon, enduring the wind and the rain, surrounded by a jolly crowd of punters.

The Moonee Valley Gold Cup is run over 2500 metres and resulted in a Chris Waller quinella, when Grand Marshall outstayed stablemate Who Shot Thebarman. 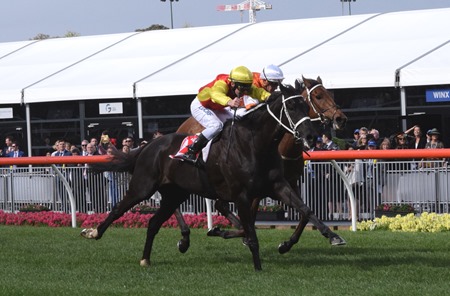 There was then an hour to wait until the Cox Plate. The intervening time was occupied with various ceremonies and the traditional appearance of Darryl Braithwaite singing “The Horses” to the singalong accompaniment of the exuberant crowd. 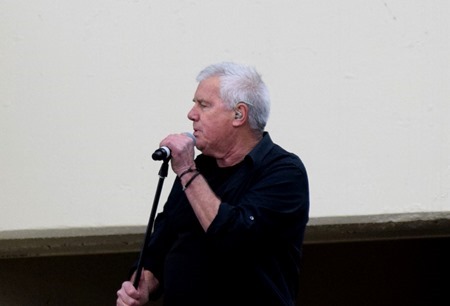 Darryl Braithwaite sings  The Horses on the balcony of the Grandstand

As the clock ticked down…. 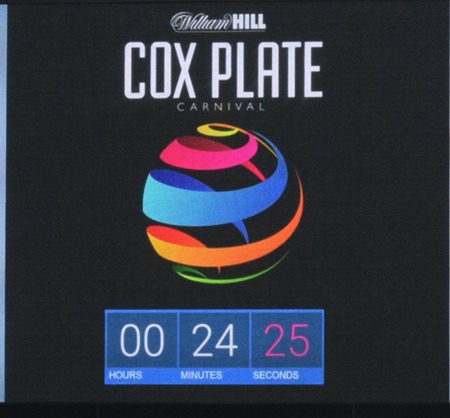 …the excitement built and a palpable atmosphere of pent up anticipation infected the pressure cooker ampitheatre that is Moonee Valley Racecourse.

The rain thankfully held off and soon enough the Cox Plate field filed out onto the track. 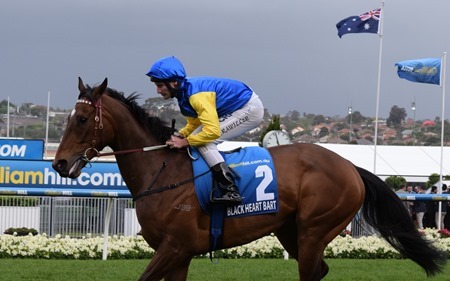 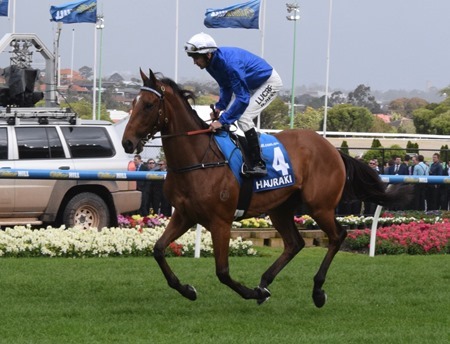 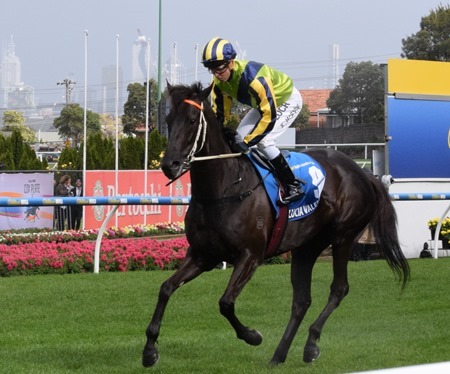 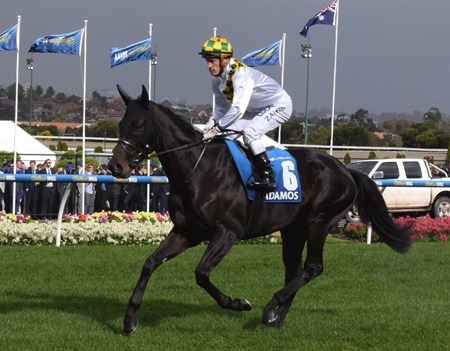 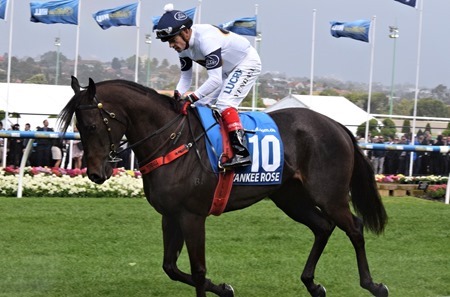 A huge cheer erupted when Winx stepped out onto the track to make her way to the barriers at the top of the straight. 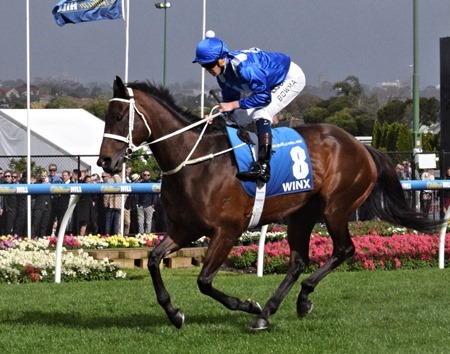 Winx on her way to the barriers

The race was run at a pretty leisurely pace initially with Black Heart Bart uncharacteristically ending up in the lead as they raced past the winning post the first time. 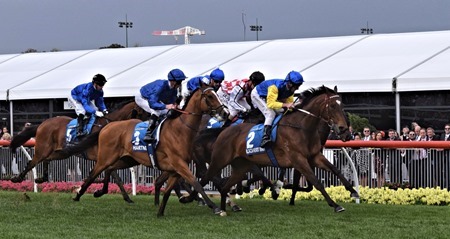 Down the straight the first time – Black Heart Bart leads, Hartnell on his outside. Winx is on the inside behind Awesome Rock (checked red silks)

As they sorted themselves out around the back stretch, the French horse Vadamos took the lead and at one stage was five lengths ahead of the rest of the field, setting a rattling pace.  As they turned into the school side of the track before the final turn into straight, the gap between Vadamos and the rest shortened dramatically. Hugh Bowman had got Winx to the outside, and fastest side of the track, and tackled Hartnell as they turned for home. The two horse battle was short lived as Winx zoomed away at the turn and swept up the straight to win by eight lengths, the crowd uproariously cheering her to the finish line.

Hartnell headed the rest with Yankee Rose only ¾ length behind him running third.

The burst mode on my camera shows Winx, then many frames of daylight. 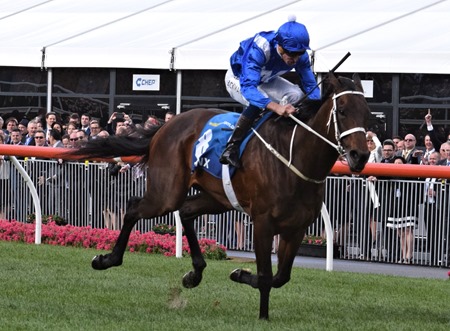 Winx on her way to winning her second Cox Plate

We had just witnessed something extraordinary, which made the whole afternoon of being harried by wind and rain worthwhile.

Winx eight length win broke the previous record seven length winning margin set by Dulcify in 1979 and Sunline  in her second Cox Plate back in 2000. 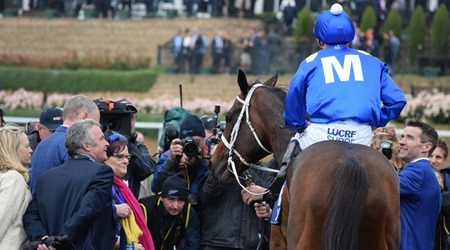 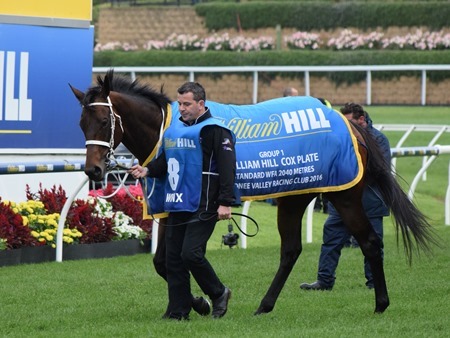 Winx in the winners rug

It had been an amazing afternoon at the races, with the ghastly weather being more than compensated for by witnessing the star mare win her 13th race in succession and second consecutive Cox Plate in such a sensational fashion.

Luckily I was curse free getting home, managing to catch a bus at Moonee Ponds Junction as soon I got there and arriving home half an hour later.

Next Saturday the racing action is at Flemington for Derby Day and will seem like an anticlimax. It’s a quality day of Group 1 racing, but will have to be pretty good to beat the Cox Plate.