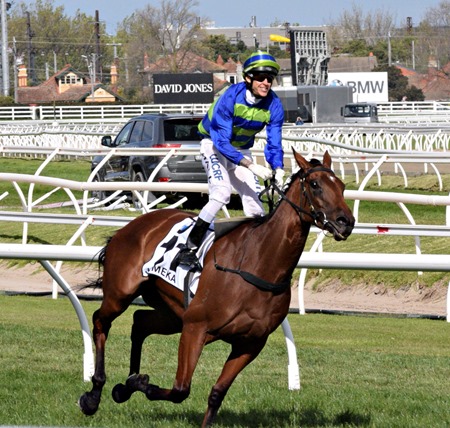 Nick Hall all smiles after Jameka wins the Caulfield Cup

The Caulfield Cup meeting on Saturday was considerably better than I thought it would be and culminated in a stunning victory for locally bred racehorses, when Jameka beat the International raiders by a comprehensive margin in the Caulfield Cup.

My afternoon at Caulfield started fairly early at around 1.15pm which was in plenty of time to watch the third race, the Listed Alinghi Stakes for fillies and mares run over 1100 metres.

There was a much bigger crowd for the Caulfield Cup than for Guineas Day, so I avoided the front lawn and spent the afternoon out the back in the stalls area and up on the hill, which as I’ve mentioned before is ideal for taking photos of horses going to and from the barriers and returning to scale, though not for them racing down the straight.

It was a fine sunny day with a strong head wind blowing directly down the straight, which adds kudos to the winners fighting against it and their rivals. 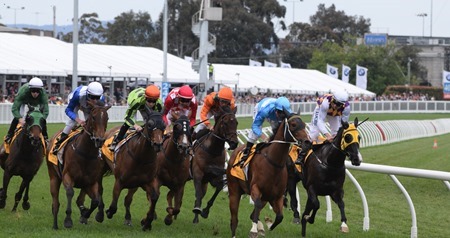 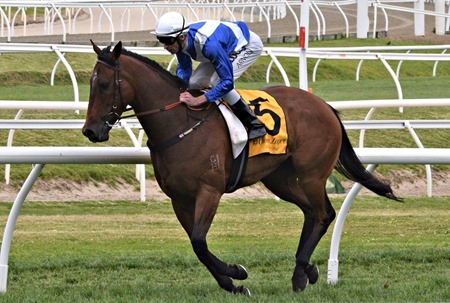 Race 4 was the Group 2 Ethereal Stakes and I was glad to be present to witness Eleonora appropriately winning the race named in honour her granddam.

She showed considerable staying power over the 2000 metres distance to win by 1¼ lengths from a fast finishing Tiamo Grace with Savvan a length further back running third. Eleonora will now head to the Crown Oaks at Flemington on the Thursday after the Cup. 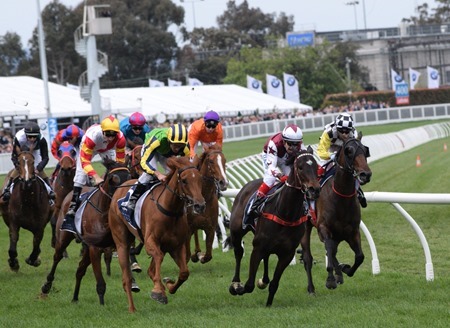 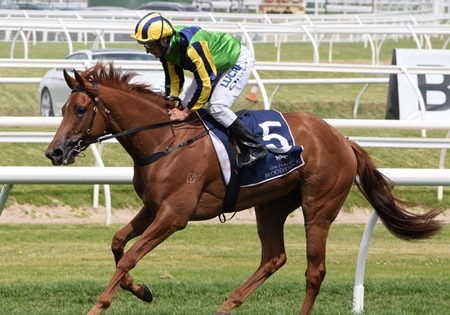 Eleonora returns to scale after winning the Ethereal Stakes 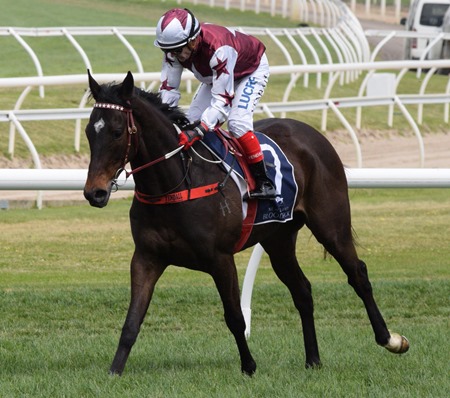 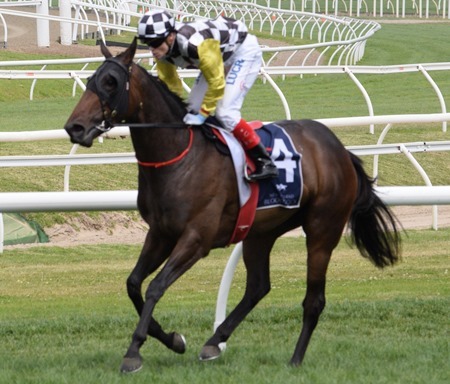 The colts and geldings version of the Ethereal Stakes, the Ladbrokes Classic, also run over 2000 metres, was the next race on the program.

James Cummings, grandson of the late great Bart, trained the winner, Good Standing. Good Standing has done most of his racing in Sydney and contested the Caulfield Guineas without running a place, but started as favourite for the Ladbrokes Classic. He didn’t disappoint his backers winning narrowly from Rocketeer. Inference finished third

Rocketeer must be the unluckiest horse in Australia, running a close second again to a better horse on the day for the fourth time this spring. 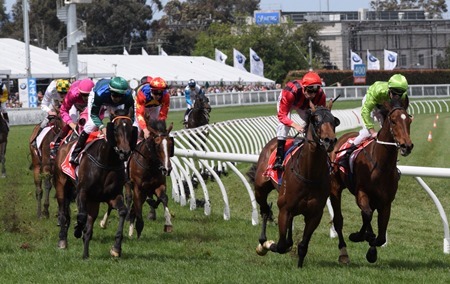 Just past the post in the Ladbrokes Classic – Good Standing (red & black stripes) & Rocketeer (lime green) lead the rest of the field around the turn. 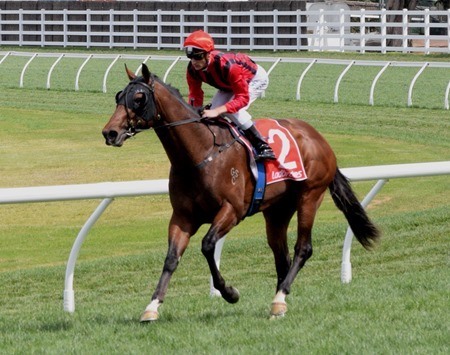 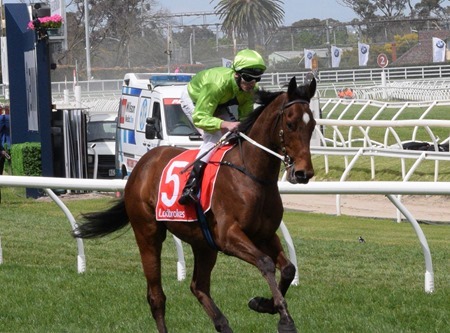 Rocketeer on his way to the barriers

The afternoon passed remarkably quickly, the races being spaced 35 minutes apart, no doubt adding to the sense of  having little time to do anything, before another race was about to start.

Race 6 was the Group 3 Coongy Cup run over 2000 metres as well. It marked the last race in which popular front runner The Cleaner would compete. His owners finally have made the decision to retire him, for which I am glad.  Now 9 years old, he has not looked anywhere like winning for over a year, so it has been sad watching him try. 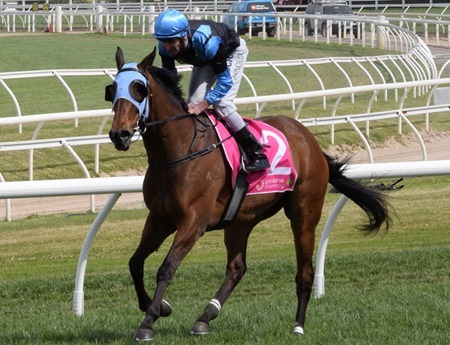 The Cleaner returning to scale after the Coongy Cup

Back to the race, It’s Somewhat was the starting favourite, but he only managed to run third.

The Chris Waller trained Vanbrugh having only his second start in Melbourne won the prize from Tom Melbourne. 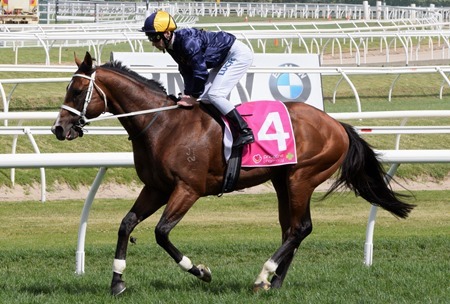 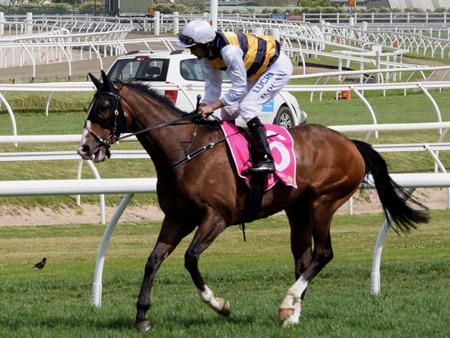 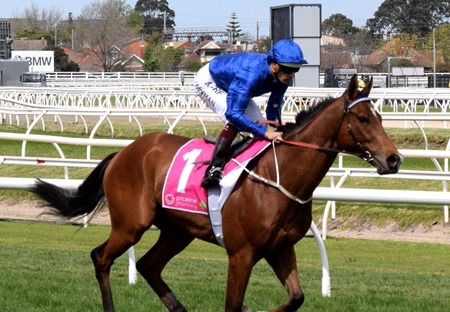 It’s Somewhat on his way to the barriers

I was looking forward to the next race with keen interest and hoping to get a good photo of First Seal who was having her first start in Melbourne.  The race was the Tristarc Stakes for mares run over 1400 metres.

Tycoon Tara was the popular favourite, but First Seal proved her quality by beating her narrowly on the line.  Pearls ran third. 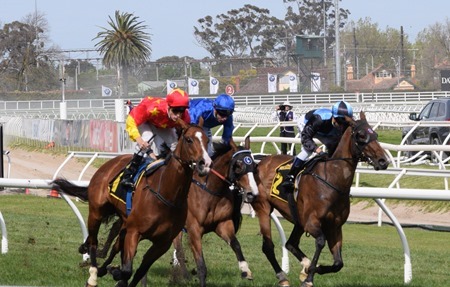 It’s great to see First Seal back in winning circles. She obviously had no trouble racing the Melbourne way. 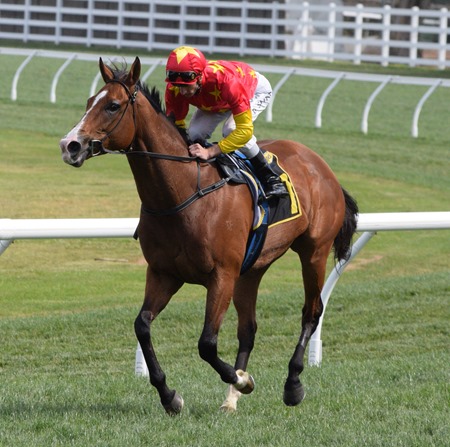 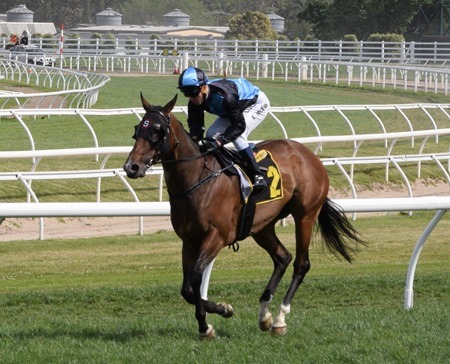 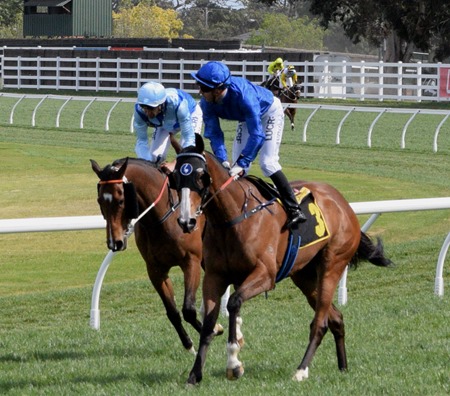 Pearls (no 3) returns to scale 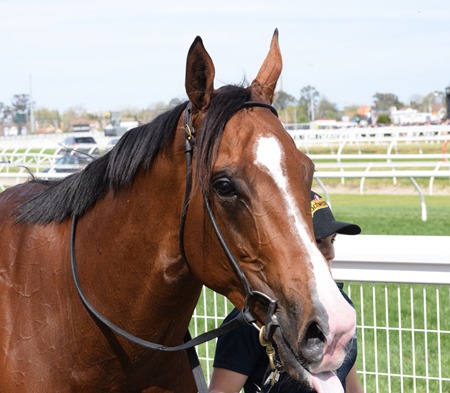 There wasn’t long to wait after the Tristarc Stakes for the main event, so I stayed on to my spot on the fence on the hill and watched The Cup being driven past to the presentation area, but was too late to get a photo.

The horses paraded down below in the pre parade ring as the National Anthem was sung, then the field began to make their way to the mounting yard.

It was an interestingly run race, with the lead changing as the race progressed. Looking at the big screen I was pleased to see that Nick Hall had Jameka up near the pace in about fifth spot. As they turned into the straight Scottish had the lead and somehow Hall had got Jameka clear of the fence and running wide. She overtook Scottish and tore away for an easy win three lengths ahead of Scottish with Exospheric coming late to run third. 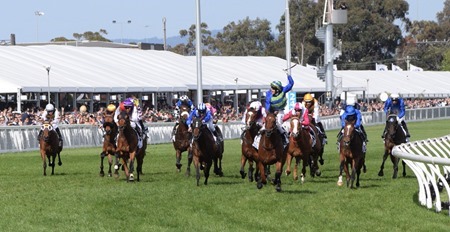 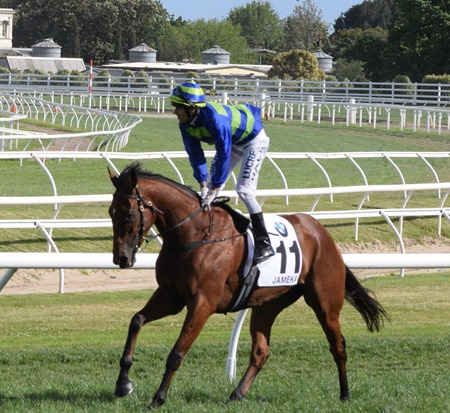 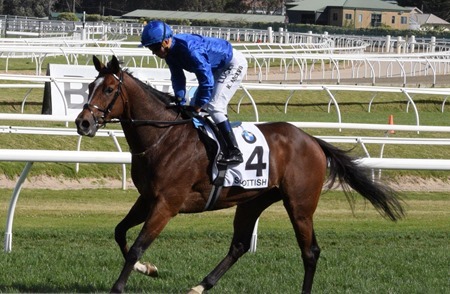 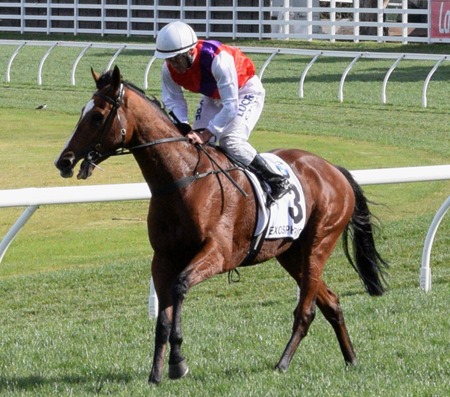 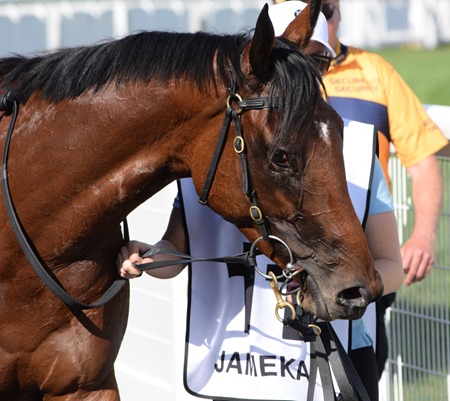 Jameka returns to the stalls area after the presentation 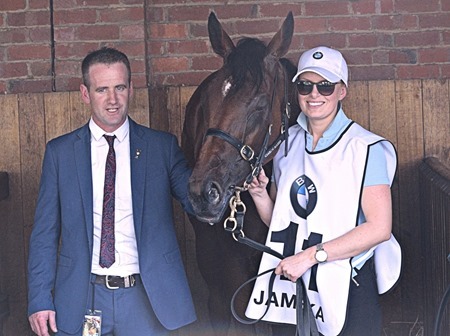 Jameka’s strapper and, I assume, one of her owners pose for snaps

With old favourite Lankan Rupee engaged in the next race, I did not depart like most of the crowd after the Caulfield Cup, but stayed to watch the running of the Group 2 Caulfield Sprint.

Lankan Rupee started from Barrier 1, which is either a blessing or a curse, and it proved the latter in this race, when he was blocked for a run and only found a gap at the last minute. Carrying 61kgs, he did well to run third.

Our Boy Malachi stormed down the outside to win by 1½ lengths from Fatinaah. 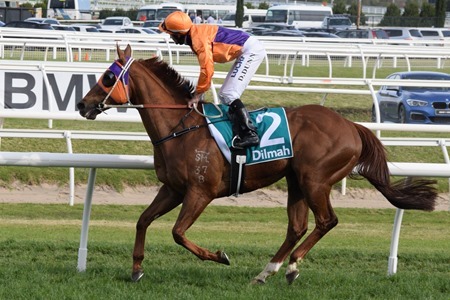 Our Boy Malachi returns to scale 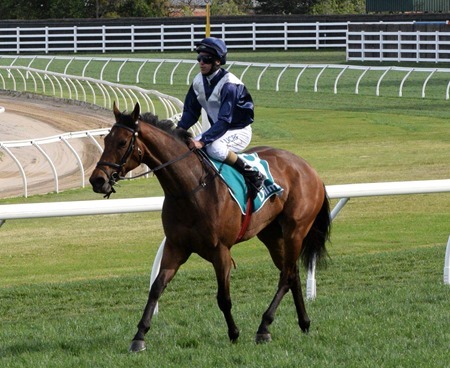 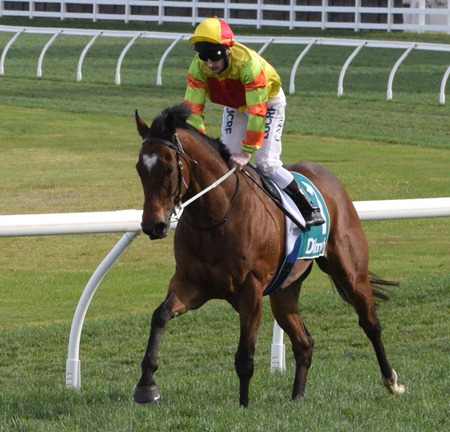 It had been a very enjoyable day at the races and gratifying that most of my favourite horses were successful in their various races.

The icing on the cake of course was Jameka’s victory in the Caulfield Cup.  She will now contest the Melbourne Cup and has been penalised to carry 53.5kgs. If she were to win the big one, it would be a weight carrying record for a four year old mare.

Next Saturday is the highly anticipated Cox Plate at Moonee Valley, where Winx and Hartnell are set to clash for a mouth watering contest that also involves the mystery French horse Vadamos and the three year old filly Yankee Rose.

Sounds like the stuff of legends – I can’t wait to see it.