The Grey Flash Kicks Off a Super Weekend of Racing 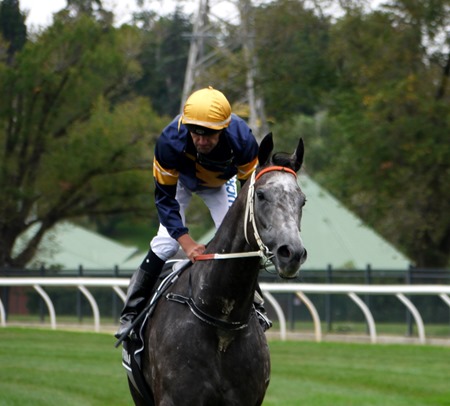 An exciting feast of first class racing is on the cards this coming weekend with five Group 1 races being run over three days at three different race tracks.

The first of these is the Group 1 Moir Stakes at Moonee Valley on Friday night which sees the return of top sprinters Chautauqua and Buffering taking on a field of younger pretenders that include Blue Diamond Stakes winner Extreme Choice.

Challenging the top pair will be the aforementioned Extreme Choice a lightweight chance having his first start in open company and speedy mares Heatherly and Wild Rain.

It looks to be a fantastic race and I’m mightily tempted to attend even though I dislike night racing. I’ll take along the Canon G16 which handles low light situations better than the Nikon.

The AFL Grand Final is being played on Saturday, but Caulfield has a low key race meeting where Miss Vista will be gunning for her third win from as many starts in Race 4, an open handicap race over 1000 metres. I wont be there in person, it but I’ll certainly watch the race from hom, as I will be be doing with the races in Sydney, where three Group 1 races feature at Randwick as well as the Group 2 Roman Consul Stakes.

The Flight Stakes is the first of the Group 1 events and is a race for fillies over 1600 metres.  The scratching of hot favourite Omei Sword leaves the race wide open and favours Yankee Rose, already a Group 1 winner and Golden Slipper runner up.  She races against 5 other fillies with Skylight Glow and Awoke being the most likely to be in the finish.

Winx won the Group 1 Epsom Stakes last year, but she is not part of the field this year. Run over 1600 metres a field of 13 will be vying for the prize.  Melbourne star Palentino fresh from winning the Group 1 Makybe Diva Stakes will be having his first start in Sydney and is up against Hauraki who ran second to Winx in the George Main Stakes.

These two are the top chances, but the lightweight Fabrizio, who won his last race by four lengths has to be a serious challenger to the top weights. Randwick Guineas winner Le Romain also is worthy of consideration along with some of Chris Waller’s runners – Mackintosh and McCreery in particular.

The Metropolitan is a race for stayers over 2400 metres and also has a field of 13 runners of which six are from the Chris Waller stable,  including Who Shot Thebarman, Grand Marshall, Storm The Stars and Antonio Guiseppe a former New Zealand trained horse who has won his last four races, albeit against weaker company.

Golden Rose winner Astern takes on the Golden Slipper winner Capitalist in the Group 2 Roman Consul Stakes, a race for three year olds over 1200 metres. Also in the mix is unbeaten colt Russian Revolution who I witnessed winning the Group 3 Vain Stakes back in August.

On Sunday the Group 1 action is at Flemington, which features the Turnbull Stakes and several other interesting Group 2 and Group 3 races at various distances.

I’m looking forward to seeing a number of runners in the flesh for the first time, such as Ele0nora a New Zealand filly trained by Murray Baker who is the granddaughter of 2001 Caulfield and Melbourne Cups winner Ethereal. She is entered in the Group 2 Edward Manifold Stakes , a race for fillies over 1600 metres. Eleonora won her first start in Australia at Geelong a few weeks ago.

Another of the talented Murray Baker team is the unbeaten (in two starts) colt Highlad having his first start in Australia in the UCI Stakes, a race for three year olds over 1800 metres.

Which brings us to the feature race…

The Chris Waller trained Preferment won the Turnbull Stakes (2000 metres) last year and he’s back again to attempt to win it a second time. He’s top weight, but he loves Flemington having won three Group 1 races on the course.

He will have to beat the formidable Sydney champ Hartnell  who has won his last two starts by big margins. He has however never won in Melbourne; not that he has raced here since last year. He will start as the favourite and will be hard to beat if he handles Flemington and the anti clockwise way of going.

Others with a chance are The United States, Tarzino, Set Square, Jameka and Raw Impulse from the Darren Weir stable.

The weather in Melbourne as I write is iffy. The deluge that knocked out South Australia didn’t affect Melbourne at all, and even though rain is forecast for tonight and Sunday, it will hopefully hold off.