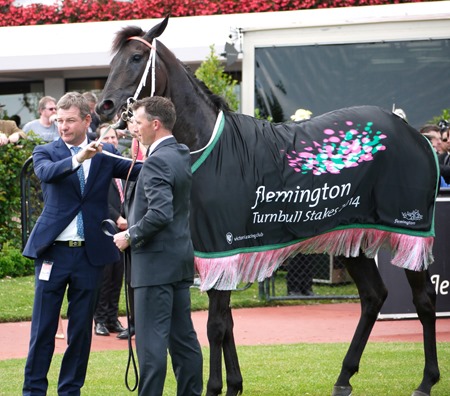 Lucia Valentina at Flemington - October 2014 - after winning the Turnbull Stakes

I’ve quite settled in to the Spring racing carnival, and  have become more enthusiastic as the action heats up and my familiarity with the runners develops.

The first to run of these is the fillies edition, and it has attracted a super field with the likes of Whispering Brook, I Am A Star and Leotie being top contenders along with New Zealand Group 1 Sires Produce Stakes winner La Luna Rossa, who beat stablemate Saracino in that race. She’s part of the Murray Baker stable so can’t be dismissed out of hand.

Sydney colts Sacred Elixir and Good Standing represent a challenge for the local boys in the Caulfield Guineas Prelude. Originally Golden Rose winner Astern was nominated for this race, but a spike in temperature discouraged his connections from risking the colt on a trip to Melbourne.

However, New Zealand colt Saracino, last seen winning the Group 2 Danehill Stakes at Flemington, could well test the Sydneysiders and steal the show.

The first of the Group 1 races on the program is the Sir Rupert Clarke Stakes is run over 1400 metres. Top picks are last start winners Voodoo Lad and Bon Aurum and the Chris Waller trained Counterattack.

Xtravagant is also entered in this race, so it will be interesting to see how he goes at Caulfield where there is a corner or two to turn before the straight. Reportedly he will not parade in the mounting yard but go to the barriers early, to keep him from getting over excited.

A field of eleven runners will contest the Group 1 Underwood Stakes. It is run over 1800 metres, so suits stayers and middle distance runners.

I’m hoping that the sole mare in the race, Lucia Valentina, can win. She has a good chance as she likes to have her races widely spaced and she hasn’t raced since finishing fourth to Winx in the Warwick Stakes on 20 August, and prior to that won the Group 1 Queen Elizabeth Stakes in the autumn.  The stars are aligned favourably for her with the sun in Libra (ruled by Venus) conjunct Jupiter (good luck) on Saturday.

The usual suspects will be vying for the prize. Black Heart Bart is current favourite despite his loss to Palentino in the Makybe Diva Stakes. Palentino is not in the field, but old trooper The Cleaner is and will no doubt set the pace, even though he has drawn the widest barrier. Both Tarzino and Tavago will be aiming to restore their reputations and Awesome Rock who won the Dato Tan Chin Nam Stakes at his last start could be a threat again.

Sydney has no Group 1 races this weekend, but a very nice program of Group 2 and Group 3 races excites some interest.

The feature race is the Group 2 Golden Pendant, a race for fillies and mares over 1400 metres. All eyes will be on First Seal making a return to racing after a longish break. Back in her three year old days, she beat Winx on two occasions, but has never found the same form since.  Her main rivals are Tycoon Tara who is in great form having beaten the boys in two of her previous races, Zanbagh and Heavens Above.

The feel good racing story of the week was the news of the birth of Black Caviar’s third foal, a filly by Snitzel early Sunday morning. There are some nice photos of Black Caviar and her foal here.

Her first foal (by Exceed and Excel), also a filly, is reportedly soon to hit the track. She has been named Oscietra after an expensive type of Russian caviar.